Why do we Keep Debating Trump's Dumb Ideas?

S. E. Cupp
|
Posted: Jan 08, 2016 12:01 AM
Share   Tweet
The opinions expressed by columnists are their own and do not necessarily represent the views of Townhall.com. 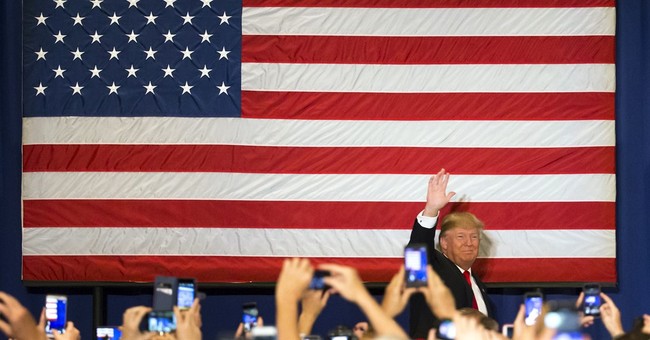 Say what you want about his flimsy policy knowledge, his unadulterated blurting and his intolerance for facts -- and I've said plenty -- but Donald Trump is a master at setting the agenda.

Every couple of weeks he spits an idea into the ether -- usually of the same gelatinous integrity as most loogies -- and it magically finds itself regurgitated by every cable news program, late night show, campaign trail press gaggle and American dinner table.

Before you rush over to Google, don't bother. Cruz is totally eligible to become president. But that hasn't stopped us from entertaining Trump's newest spitball as a thing to "Discuss" with a capital "D".

A brief tour of Trump's previous talkers reads like a syllabus from Faber College.

There was the week-plus we spent debating what he meant when he said blood was coming out of Fox News anchor Megyn Kelly's "whatever." He ultimately claimed "nose."

Then there was the time we almost didn't at all believe him when he said he was talking about Carly Fiorina's "persona" when he said, "Look at that face! Would anyone vote for that? Can you imagine that, the face of our next president?"

More recently we studied Trump's use of the word "schlonged" to describe Obama's defeat of Hillary Clinton in the 2008 election. No, seriously -- we studied it.

Behold, a Washington Post column: "Donald Trump's 'schlonged': A linguistic investigation," in which Harvard University's Steven Pinker is asked if it's possible Trump was not, in fact, using a derogatory word for male genitalia.

"Many goyim" -- that's non-Jews, for all you non-Harvards -- "are confused by the large number of Yiddish terms beginning with 'schl' or 'schm' (schlemiel, schlemazzle, schmeggegge, schlub, schlock, schlep, schmutz, schnook) and use them incorrectly or interchangeably," Professor Pinker postulates. So, instead of taking at face value that the man who has called women bimbos and slobs and repeatedly curses on the campaign trail used sexist slang to describe Hillary Clinton, we'll actually entertain the idea that he just reached for the wrong Yiddish. Oy vey.

Worse than the name-calling and Animal House humor, though, are the conversations that seem to have a veneer of substance -- and so are debated substantively, usually to the detriment of everyone involved.

First Trump lures you in by starting with an actual issue, like immigration or terrorism. But a few incoherent non-sequiturs later, it goes where no one in their right mind -- or who was running for president -- would ever take it. And a week later you're actually discussing whether President Eisenhower's horrific "Operation Wetback" is something we should legitimately revisit.

Or, instead of binge-listening to "Serial," you find yourself reading up on the legal precedent for repealing the 14th Amendment. And whether we could actually get Mexico to pay for a wall on the U.S. border -- to keep themselves out.

When Trump word-vomited that Muslims should be banned from entering the United States in response to the Paris terrorist attacks, all sorts of mind-numbing nonsense followed. Real, human people with grown-up jobs actually defended this by comparing it to the Japanese internment camps of World War II.

There were columns asking, "Is Donald Trump's conditional bar on Muslim's entry into the United States a shocking outrage, or just similar to the 1979 policy adopted by Democratic President Jimmy Carter?" Don't strain too hard to figure out which the author thinks it is.

When pressed on the constitutionality of religious tests and the immorality of banning roughly one-quarter of Earth's population from visiting America on the basis of religion, his spokeswoman simply replied to me during a CNN segment, "So what? They're Muslim."

"So what? They're Muslim" is the perfect encapsulation of just how shallow, anti-intellectual, absurd and grotesque the era of Trump truly is. So why do we continue to throw ourselves down these rabbit holes of inanity?

Are we so bored by the real world that we eagerly leap into Trump's cartoonish fantasies just to escape the monotony of solving actual problems -- such as, Where's all my money gone? And: What happened toBaltimore? Or: Holy heroin epidemic!

Either we are so completely overwhelmed by these heavy, seemingly intractable issues that fiddling with Trump's childish playthings instead is a kind of catharsis, or he really is a harbinger of the way politics will be handled in the future: devoid of any substance, nuance or civility.

Until we have our answer, I'll see you next time -- to question the necessity of child labor laws.