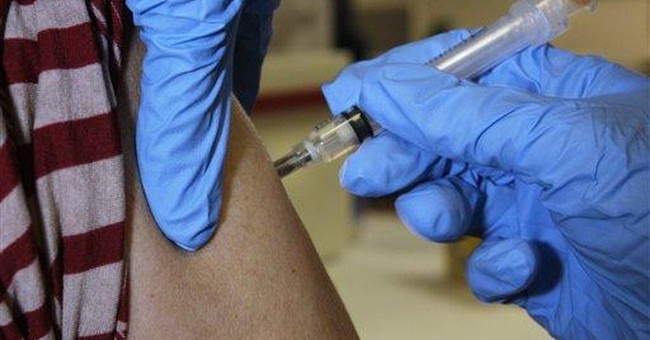 New York health-care workers are protesting the emergency regulation adopted this summer by the State Health Department making seasonal and swine flu shots mandatory. As well they should. So should good conservatives, libertarians – and yes – the pro-choice left.

If those groups sound incongruous, it’s because they generally are. But New York State ’s bold and radical move to mandate flu shots is an area in which they should meet in agreement. And they shouldn’t leave this fight to New York ’s nurses and hospital administrators to fight alone.

The health-care workers are coming at the alarming new requirement, unanimously approved by the state Hospital Review and Planning Council, from a number of angles – some say the vaccine hasn’t been adequately tested. Others suggest vaccination in general carries unnecessary risks. And others say their labor agreement with the Public Employees Federation should make it illegal for the state to mandate the shots – they’ve even alleged that some employees have been fired or quit because they refused to get it.

Dr. Richard Daines, the state health commissioner appointed by Eliot Spitzer, said the shots are perfectly safe, and requiring health-care workers to get them is the best way to prevent the flu from spreading. “This isn’t the time to pump air into a completely deflated argument about vaccine safety.”

Daines’ assurances aside, health-care workers are right to resist this, and it’s not just the practical concerns – the safety of the vaccines, for one – that they should be worried about. There are broader implications here that should pique the interest of folks as disparate as Ron Paul, the Republican Congressman from Texas, NARAL Pro-Choice America, Mark Steyn, Gloria Steinem, John Stossel, and the National Organization for Women, all of whom would likely cringe to know I had just grouped them together in a single paragraph.

Allow me to elaborate. For one, mandating the flu shot delegitimizes the entire pro-choice movement, predicated on the insistence that women have sole domain and authority over their bodies. (Feminism has yet to adequately answer whether or not men have the same authority over theirs. But that’s another story.)

But it’s not just an issue of women’s rights. Requiring health-care workers to get the flu shot should put a scare into freedom-loving libertarians everywhere. As everyone knows, if you give the government an inch, they’ll take 5,280 feet – where would this end? Do we force vaccination on school teachers? Bus drivers? Airport workers? Toll booth collectors? Doormen? The truth is, I’m far more likely to get swine flu from my officemate than a nurse at St. Vincent ’s who I’ll probably never see. Should I tell Mr. Mucous next to me that he has to get the shot? Should the state? The implications are obvious, yet the remote corners of the libertarian blogosphere are the only places where this issue is being argued. Where are all the heavy hitters?

This isn’t to diminish the seriousness of the flu problem. Of course we don’t want it to spread. But doesn’t it make more sense to require, say, a week leave of absence for health-care workers who actually get infected, than to legislate that an entire swath of citizens get drugs they may or may not want?

Philosophically, the pro-choice left and the libertarian right need to unite on this issue before Arizona and Florida and Nebraska and the rest of the country join New York in forcing a vaccine on thousands of its residents. A number of states, including Iowa, Massachusetts and North Carolina, are already toying with the notion of forcible quarantines for flu patients, jailing those who refuse isolation, and warrant-less home entry in the interest of preventing a flu epidemic.

New York is a poor, indefensible lab rat for this startling new nanny-state policy. If only the feminists and the libertarians (and even PETA perhaps?) could recognize the urgency of the problem, get over their differences, and come together in opposition to it. Now that would be a post-partisan change to believe in.