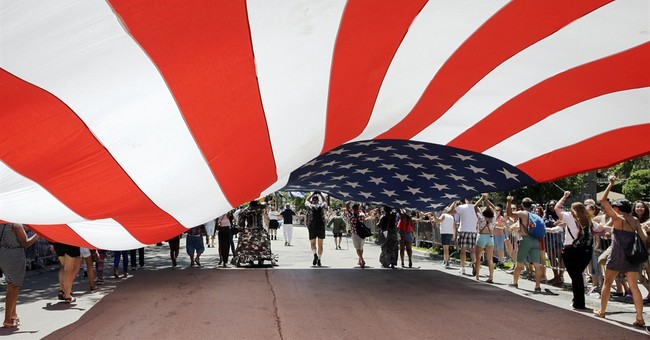 Dina Galassini is an unexpected champion of the First Amendment. Dina lives in Fountain Hills, Arizona, a quiet suburb in the metro-Phoenix area that is made up of mostly retired residents who love golf, good weather, and great views.

But a champion she is, and it all started with a simple email.

In 2011, there was a bond election in the town of Fountain Hills. Dina opposed the bond measure and emailed 23 friends and acquaintances asking them to join her in opposing the measure by writing letters to the editor and forwarding her email to their friends. She also asked them to join in two protests of the measure. Given that she didn’t have much, if any, money to spend on the effort, she thought organizing sign waving on a main street corner with hand-made signs was an effective way to communicate to the residents of Fountain Hills.

Her email came to the attention of elections officials at the town clerk’s office and she received a letter telling her to “cease any campaign related activities” until she had filed with the Arizona Secretary of State and organized a “political committee.”

Think about that. If you and a couple friends want to voice your opinion publicly, you have to go get the permission of the government to do so. This is a clear violation of the First Amendment as written and intended by our Founding Fathers.

Thankfully, Dina, with the help of the Institute for Justice, sued Fountain Hills and late last year a federal judge struck down Arizona’s definition of “political committee” writing that it was “vague, overbroad, and consequently unconstitutional in violation of the First Amendment.”

A bill introduced by State Representative Michelle Ugenti, seeks to fix the unconstitutional language that has for years directly suppressed free speech and free association rights of Arizona’s citizens.

This current law is a 183-word run-on sentence and an over-broad caveat to the First Amendment that shouldn’t exist. It allows for a group of people who have simply gathered to organize a protest or some other political activity to be classified as a “political committee” and forces them to register with the government. Consider the Selma, Alabama march, of which we just observed the 50th anniversary, and the Civil Rights movement as a whole. Could you imagine if those brave men and women had to get the government’s approval first? Speech and engaging in politics in our democracy shouldn’t require a license.

But the assault on the First Amendment continues, especially on the national level. Last Congress, Harry Reid and his fellow Senate Democrats tried to pass a constitutional amendment that would have effectively altered the First Amendment to give Congress complete control of campaign finance.

The FCC has now passed Internet governance rules that grant the agency extremely broad powers to regulate the web.

The IRS tried to silence conservative groups with the noose of red tape.

Now the FEC is trying to regulate political speech online and demand disclosure documents from anyone posting anything even marginally political.

This is precisely why the Founding Fathers provided us with a federalist system. Governments make mistakes. Those mistakes can, and too often do, infringe upon our inalienable rights. When power is concentrated in Washington, the federal government’s inevitable mistakes greatly increase in magnitude. Yet when power is divided amongst the 50 states, best practices are more easily observed and implemented. Representative Ugenti’s bill is a perfect example.

The leviathan in Washington was never supposed to do this much. Primary governing was supposed to be left to the states. Perhaps the contrast of federal government’s efforts to curtail free speech in the wake of its missteps to Arizona’s plan to expand First Amendment rights proves that our civil rights and liberties are now best protected in the statehouse as well.

Firearms Reporter Brings Clarity to the 'Why Can We Shoot People in the Legs' Debate
Matt Vespa
'What's the Incentive?': NBC Host Asks CDC Director When Vaccinated Americans Can Take Off Their Masks
Spencer Brown