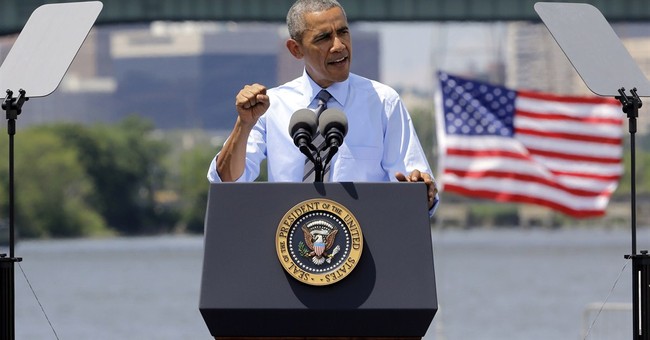 Remembering back to any high school US history class, we can all recall hearing about the doctrines of various presidents. A doctrine would be the pattern of actions that came to define a given administration. The history of doctrines tends to remember presidents by their aggressive foreign policy stances, such as the Monroe Doctrine towards European colonization efforts in the Americas or the Reagan Doctrine of pushing back Soviet influence around the world.

President Obama, on the other hand, will likely not be remembered for any significant foreign policy achievements. Instead, unfortunately, when Americans think of the Obama Doctrine, they will remember a decidedly passive-aggressive domestic policy. President Obama’s doctrine is a consistent misuse of executive power to unilaterally advance his agenda and strangle groups of Americans and economic actors that operate in contrast to his progressive vision.

This is most apparent in the energy sector, where companies in Obama’s less-than-favored industries, like coal mining and oil and gas exploration, wait almost endlessly for approval of their operating permits from agencies like the Environmental Protection Agency. An even more visible example is the now 2125+plus day wait on a decision regarding the Keystone XL pipeline in spite of bipartisan support and continued reviews that demonstrate the project’s negligible environmental impact. The problem is so widespread that it’s prompted several Republican-sponsored efforts in both chambers of Congress to place strict time limits on permitting processes in order to prevent this stifle-by-stalling strategy.

This problem is not unique to the energy sector, however. The Obama Doctrine actually cropped up as an integral part of the IRS’s strategy to silence conservative Americans.

Last summer, it was revealed that several officials throughout the Internal Revenue Service’s hierarchy had appointed themselves the new defacto thought police of the United States. Conservative Americans lawfully seeking tax-exempt status for their organizations, the very kinds of groups that make up the civil society Alexis de Tocqueville marveled at in his famous Democracy in America

(another high school US history staple), were explicitly targeted for additional scrutiny by an agency that is consistently mocked for its mercilessness. Americans, who had committed no crime whatsoever, were subject to lengthy inspections so thorough that even the content of their prayers became the object of federal investigation. I have a hard time imagining a practice that is a more clear violation of the First Amendment, but I digress.

What these overly intensive investigations ultimately resulted in was another perfect execution of the Obama Doctrine. Some groups gave up while others waited three or more years for a decision. Ultimately, the public servants at the IRS only ended up serving the political interests of the president and his allies. All the while, these targeted groups were left with little recourse.

The good news is that the rampant use of this tactic of exploiting limitless review periods to obstruct lawful activity has prompted action. As mentioned, Republicans in the Senate and House have advanced several pieces of legislation that would force regulatory agencies to make expeditious decisions on energy and environment related operating permits. This week, on the IRS front, Senator Dan Coats (R-IN) is set to introduce the Access to Court Challenges for Exempt Status Seekers (ACCESS) Act. This bill would afford those groups seeking 501c(4) status the same protections afforded to charities and foundations that apply for 501c(3) status. The latter groups currently enjoy the ability to have the courts make an immediate judgment on their tax-exempt status should the IRS fail to do so within nine months. The ACCESS Act would simply expand this same right to applicants for c(4) status as well.

The Sixth Amendment to the US Constitution guarantees the right of a “speedy” trial to those accused of crime, so it’s safe to say that the Obama Doctrine, the practice of using the government to obstruct lawful activity of innocent citizens, totally flies in the face of the principles upon which this nation was founded. While we should be aware of, remember, and study the Obama Doctrine, it should be a policy practice rendered incapable of replication. Members of Congress on both sides would be wise to advance legislation like Senator Coats’ ACCESS Act to do so, as I’m sure Democrats would regret leaving such precedent open for a Republican administration.