Scott Rasmussen
|
Posted: Nov 17, 2016 12:01 AM
Share   Tweet
The opinions expressed by columnists are their own and do not necessarily represent the views of Townhall.com. 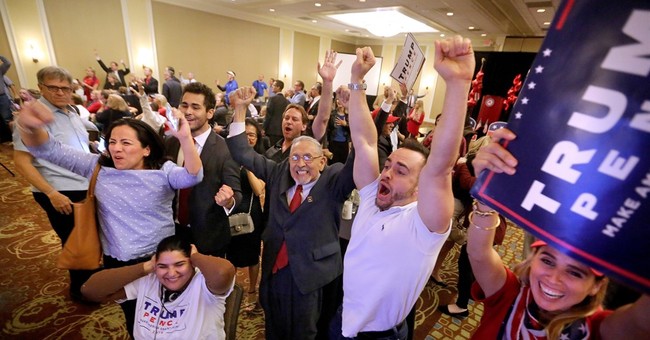 From that perspective, the only real question is why President-elect Trump didn't win by a bigger margin.

For example, there are 99 state legislative bodies in America (every state but Nebraska has two -- a House and a Senate). Data from Ballotpedia.org shows that, during the Obama Administration, there was an amazing transformation among those legislatures. An astounding 85 out of the 99 are more Republican today than they were when President Obama took office."

The impact of this can be seen in the number of what Ballotpedia calls Trifectas. These are states where one party controls both houses of the state legislature and the governorship. They have, in effect, total control over the state's political process.

When President Obama took office, Democrats had more Trifecta control than Republicans. There were 14 Trifectas held by the president's party and 11 by the loyal opposition. Now, however, the Republicans dominate. Following last week's election, the GOP holds 25 Trifectas while the Democrats hold only six.

To suggest that Republican gains during the Obama years have been broad and deep is an understatement. There are now 958 more individual Republican state legislators than there were eight years ago.

On top of this, Republicans have increased their number of U.S. Senators from 41 to 52 and added more than 60 seats in the House of Representatives. Overall, as chronicled by Sean Trende of Real Clear Politics, the Republican Party is stronger today than it has been at any time since the 1920s.

The recent strength of the GOP can be traced directly to President Obama's policies including Obamacare, the War on Coal and an ever-growing regulatory burden. More broadly, while official Washington applauded the president's enthusiasm for top down government by federal bureaucrats, most of America did not.

Donald Trump rode this wave of growing GOP strength all the way to the White House.

The President-elect was far from the perfect messenger. But, among the 17 Republicans and 3 Democrats who sought their party's presidential nomination, he was the only one who recognized the moment.

All the other candidates were making the same mistake as the journalists -- they were looking to Washington to explain America. They were part of a political class that had grown far too comfortable serving Wall Street at the expense of Main Street. They dismissed the concerns of everyday Americans as irrelevant to the workings of government.

Trump, on the other hand, looked to America to explain Washington. No matter what the DC consultants said, he instinctively understood that most Americans see the political class as a problem rather than the solution. That's something none of the other candidates were willing to admit.

The President-elect almost certainly never did an analysis of how much strength Republicans have gained in state legislatures during the Obama era. He simply felt it. But the evidence was there for all to see. And the numbers suggest that the Democrats may remain in the political wilderness for a long time to come.