Will Indiana Put an End to Trumpmania?

Scott Rasmussen
|
Posted: Apr 28, 2016 12:01 AM
Share   Tweet
The opinions expressed by columnists are their own and do not necessarily represent the views of Townhall.com. 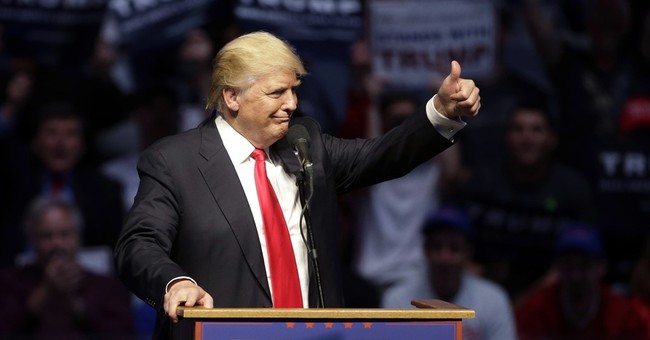 After sweeping five state preference primaries on Tuesday night, Donald Trump declared himself to be the presumptive nominee of the Republican Party. He may end up as the nominee, but he's not there yet.

In fact, his plans to claim an early victory could come to a screeching halt in Indiana next Tuesday.

If Senator Ted Cruz wins Indiana, he will certainly change the narrative of the race. Just as important, he'd make it very difficult for Trump to cobble together enough delegates to win on the first ballot.

Right now, my projections show that if everything breaks right for Trump, he would get a total of 1,269 delegates (see styrk.com). That's more than enough to win it all, but that total assumes he wins big in Indiana.

A loss in the Hoosier State would cost Trump an estimated 45 delegates (51 assumed for the winner minus 6 for the loser). That would put him about a dozen votes shy of where he needs to be. And, there would still be nine states in play.

After the blowouts of the last two weeks, some people find it hard to believe that Cruz could actually win the next primary. I don't know if he will win, but I do know that there are reasons to believe it is possible.

First, Indiana is much different than New York, Rhode Island, Connecticut and the other northeastern states.

But there's something else going on that is probably causing some heartache among the campaign professionals on Team Trump. Their candidate's biggest victories have come in the states with the lowest turnout. That's because the Cruz team didn't waste money advertising in states they expected to lose.

Whatever else may happen next Tuesday, you can be sure that the Cruz team and their allies will spend plenty of money advertising and getting people to the polls. With both sides fully engaged, voter turnout should end up among the highest of the season, and that's good for Cruz.

If Cruz does pull off a victory next week, the final nine states will determine whether Trump still has a chance for the nomination. Trump is expected to win New Jersey and West Virginia while Cruz could win Nebraska, South Dakota, and Montana. Three other states split their delegates proportionally and should be close.

But the last state to vote -- California -- will have a huge impact.

The delegate details are different than Indiana, but the dynamics are the same and produce a big difference between first and second place. The statewide winner might pick up 133 delegates while the loser could hope for about 39.

If Trump loses Indiana but has a big win in California, he could probably claw his way to a narrow convention victory.

But if he loses both Indiana and California, the storyline will be much different. In that scenario, Trump would end the campaign on a losing streak and Cruz would be the nominee.