What Should You Do When You’re Surrounded By a Mob?

Scott Morefield
|
Posted: Jan 18, 2021 12:01 AM
Share   Tweet
The opinions expressed by columnists are their own and do not necessarily represent the views of Townhall.com. 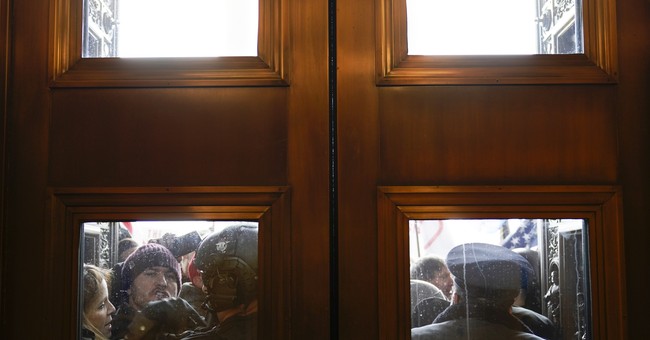 One of the highest-clicked media posts I've ever written up at the Daily Caller was about former Navy Seal Jack Carr appearing on “Tucker Carlson Tonight” last August to explain what to do in the event one finds oneself in the proximity an angry (in this case, BLM/Antifa) mob. It’s obviously a harrowing thought that, judging from the search clicks this post continues to get, has been pondered by many a conservative who witnessed with horror the seemingly neverending weeks of unchecked mob violence in cities and even suburbs across America.

Much of Carr’s advice centered around using situational awareness to avoid finding oneself in that predicament in the first place. "The main thing is to avoid those right away,” he told Tucker Carlson. “So situational awareness. Looking around, being aware that there are threats, picking your head up out of that phone and turning around. If you turn a corner and you see something that doesn’t look right – as an army special forces sniper from Vietnam told me years ago – he said, ‘if it doesn’t look right, it’s probably not.’ So trust those instincts and pay attention to that sixth sense that has kept us alive as a species since we’ve been on this planet. If it doesn’t look right, turn around, reverse, get out of there.”

As recent events have shown, Carr's general advice about situational awareness doesn't just apply to violent BLM/Antifa mobs. Turns out, it also applies to mobs of the MAGA variety, like the one that rampaged through the U.S. Capitol building on January 6. If you were anywhere in the vicinity of that particular mob, however, the danger is a bit different. You see, in our current two-tiered “justice” system, people who actively engage in violent riots typically don’t have the book thrown at them AS LONG AS those violent riots were done under the guise of the nebulous notion of “social justice.” I would add the caveat that they don’t take place in or around federal government buildings, except for the fact that, for starters, nothing of significance happened to rioters who beat on the Supreme Court’s doors in 2018 or those who attacked Secret Service near the White House last year.

On the other hand, if a violent riot is based on a right-of-center cause (this almost never happens, but they did get their purple squirrel on January 6), expect the authorities to cast as wide a net as possible and BURY anyone caught up in it. Right now, though only a few hundred people actually made their way inside the Capitol building and only a few dozen of those actually seemed to have participated in doing damage, hundreds if not thousands are likely to be charged with something related to that day’s lawlessness. We obviously have no idea how this will ultimately play out, but we can be pretty sure that these initial, seemingly lower-level charges are just the tip of the iceberg to the coming “sedition and conspiracy” raps that could put many away for decades. And while some of these will be more than justified, in my view, others could ensnare people who tragically may have simply been at the worst place at the worst possible time.

Certainly, those who went inside the Capitol building with the intention of kidnapping (zip ties?!) members of Congress and "forcing" them to vote their way deserve what’s coming to them, and then some. Criminal charges should also apply to those who attacked police, broke into offices, accessed computers, or committed vandalism. We can’t have any of that in a democratic society. But what about those who just followed the crowd? What if you were at the entrance where Capitol Police opened the gate. Maybe, just maybe, you weren’t aware of the violence right away and just saw a crowd walking toward the building. “Hey, can’t hurt to go take some video, see what’s going on,” you think, before making the greatest mistake of your life.

What should happen to someone like this? Trespassing charges? Perhaps. But "sedition and conspiracy"? Seriously? Of course, unless we’re a prosecutor or on the jury, it doesn't matter what you or I think. The federal reaction to this has and will be a massive OVERreaction, and people who may have merely followed the crowd are likely about to lose everything.

Which is a cautionary tale for the rest of us. What do you do when you’re in a politically-charged crowd and it begins to move angrily in a particular direction? I won’t get into the theory about who may have had a role in provoking this (one leftist has already been charged), except to say that it only takes a small number of instigators to turn a demonstration into a riotous mob. The right answer for those who wanted to merely demonstrate, obviously, was to never enter the Capitol building in the first place. But most people who were there that day, other than those who planned and/or instigated it, likely had no idea what happened was going to happen. That's the crazy thing about mobs. They can get out of control fast.

Applying Carr’s advice to this, would better situational awareness have helped? First of all, when involved in a protest or demonstration, NEVER go into an unauthorized area with other people, no matter who tells you it’s OK. There is NO SUCH THING as safety in numbers when it comes to the long arm of the law. Second, look for things that seem extraordinarily unusual and/or out of place. At what point would someone paying conscious attention to what's going on around them begin to experience some "spidey sense" tingling? When things got really loud? When people started hanging off the balcony? When offices and especially the SENATE CHAMBER were being broken into? When podiums were being drug around? When windows were being smashed? When police were being attacked? When one found oneself within the proximity of a man wearing Viking horns and wielding a spear?

At any of these points, no matter how far one had gone, continuing on was a VERY dumb mistake. The right move was to GO THE OTHER DIRECTION as quickly as possible. Get the hell out of there.

The left would like the right to forgo any and all public demonstrations out of shame for what happened on January 6, but the right to protest peacefully - PEACEFULLY - is firmly enshrined in the Constitution. Conservatives shouldn't let this stop them from speaking truth to power in person. But responsibility and situational awareness means walking - nay RUNNING - the other direction if anything seems as it shouldn't. Don’t get captured by an angry mob, and don’t get caught up in one either. Both can lead to dire consequences.

I can still be found on Twitter, but I’m also trying to build alternate platforms (as we all should). To that end, please consider following me on Gab and friending me on MeWe (I will accept all contact requests).