Scott Morefield
|
Posted: May 21, 2018 12:01 AM
Share   Tweet
The opinions expressed by columnists are their own and do not necessarily represent the views of Townhall.com. 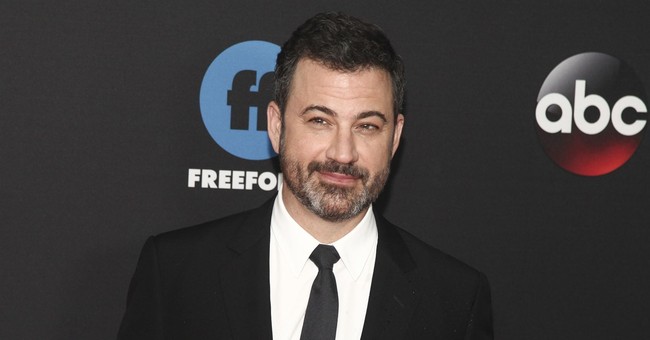 Before launching into the tired jokes that would normally begin his late-night show on Friday, Jimmy Kimmel - or ‘America’s Conscience’ (in his own mind at least) - felt the need to give his audience yet another lecture on gun control.

“So [politicians] sit there with their hands in their pockets, pockets that are full of gun money, and they do nothing,” said Kimmel. “They just wait for the outrage to pass because it didn’t happen to their children. The least you can do is register to vote, right now. Make sure we vote for politicians who will do something.”

Since another sadistic maniac had just attacked a school, we’ve got to “do something,” as long as that “something” involves taking away freedoms from law-abiding Americans and not anything that would actually work, of course. But that wasn’t even the kicker to Kimmel’s rhetoric-filled nonsense. No, the kicker would be this gem:

“These kind of things don’t happen in countries with real, sensible gun laws,” Kimmel said with a straight face, even managing to cut the crocodile tears this time around.

So, what is a “real, sensible” gun law to Jimmy Kimmel? Does Norway have them? He’d probably say so, since they’re among the strictest in the Western world. Yet, in 2011, Anders Breivik literally dotted every i and crossed every t as he successfully navigated his country’s draconian gun laws to legally obtain a semi-automatic rifle under the pretence of hunting deer and a pistol by proving that he attended a shooting club regularly. Because those are the two ways private citizens are generally allowed to obtain a gun in Norway.

Except, Breivik wasn’t hunting animals. He was hunting humans, and given his country’s ridiculously strict gun control laws he could pretty well guarantee there wouldn’t be an armed response when he attacked a youth summer camp, killing 77 people and injuring hundreds more with a combination of bombs and shooting what tragically amounted to fish in a barrel with the guns he had legally obtained.

What about China? Kimmel would like China even better, I’d bet. He and his fellow libs would probably love enacting some of THOSE “real, sensible” gun control laws, especially since the Red Chinese essentially don’t allow gun ownership at all to its citizenry.

And no schools get attacked there, right?

Except, just three weeks ago a man with the surname Zhao attacked a middle school in central China, killing nine children and wounding 10 more... with a knife. “The attack revived fears in China about school safety, a perennial concern among parents,” wrote the New York Times. “Knives are a weapon of choice in China, where guns and other weapons are strictly regulated.” The Times then unironically quoted a Weibo user who unironically wrote, “I thought campuses were safe without guns.”

In fact, guns have little to do with parental concern about school safety in China these days. As the Times notes, a “spate of stabbings prompted the government to tighten security at schools, installing gates and cameras and training security guards to fend off attackers” in 2010. The attacks included a landlord who hacked seven kindergarteners and their teacher to death with a meat cleaver and another who killed eight children with a knife.

But even hardening the schools hasn’t entirely prevented the attacks, though they have undoubtedly helped. In December 2012, a villager named Min Yongjun attacked Chenpeng Village Primary School, non-fatally stabbing an elderly woman and 23 children. In September 2011, a mentally ill farmer killed three adults and a young girl on their way to nursery school with an axe. And just last year a man killed seven and injured 65 with a bomb set outside an eastern China kindergarten.

Experts blame the attacks on everything from social upheavals to a lack of mental care, but the truth is much simpler. Sadly, no matter what society does there will always be evil people in this world who will find ever more twisted ways to do evil things. The totalitarian Chinese have literally been at war with guns among its populace since they were invented, and yet its evildoers resort to knives to commit their mayhem while the law abiding, having nothing with which to defend themselves, have no choice but to submit to a tyrannical government - a government that, by the way, hasn’t hesitated to kill millions to accomplish it ends.

The fact that liberals like Jimmy Kimmel seem to seriously think removing a tool, especially one that is more often used for good, will somehow make the world a safer place is more than a testament to their perpetual ignorance - it could very well be proof of their own nefarious motives.

Which brings us back to Santa Fe, and American liberal efforts to ban or severely control guns as a way to somehow keep schools safer. USA Today got a lot of grief for referring to the weapons used as “less lethal,” but they have a small point in that a so-called “assault rifle” wasn’t used this time around. And yet, after Parkland, such rifles were plastered on protest signs everywhere as the scourge of evil. After Santa Fe are we to ban shotguns now? Pistols? Knives?

In truth, there is no law that could have successfully prevented this latest tragedy. If the murderer couldn’t have stolen the legally obtained weapons from his father or someone else, does any rational person really think he wouldn’t have resorted to knives or bombs or another weapon to exact his twisted revenge? If you do, you probably thought schools were “safe” in China.

There is only one path to preserve liberty and protect our children at the same time, and that is to truly harden our schools. A plan toward that end is laid out brilliantly in this Townhall classic by Kevin McCullough, published after Parkland.

Even then, until Christ returns, no place where humans reside will ever be totally safe. But I, for one, would far rather live with such uncertainty as a free man than as a slave.