Scott Morefield
|
Posted: Mar 26, 2018 12:01 AM
Share   Tweet
The opinions expressed by columnists are their own and do not necessarily represent the views of Townhall.com. 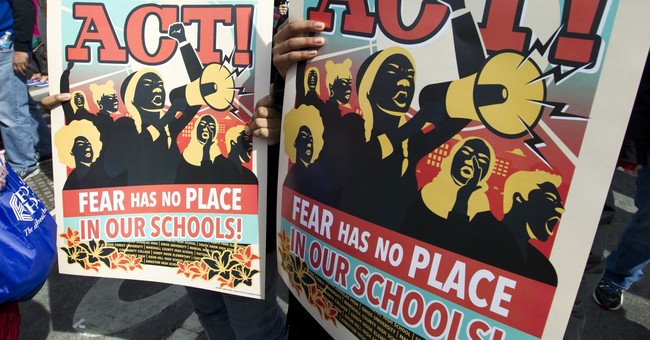 In August 1999, British farmer Tony Martin, whose home and farm had been invaded multiple times over a span of years, grabbed a pump action shotgun and opened fire on a pair of would-be burglars he discovered in his home, killing 16-year-old Fred Barras and wounding 33-year-old Brendon Fearon in the leg.

Instead of some free counseling and maybe even a medal for his act of heroism, Martin was arrested by British authorities, charged with murder and wounding with intent, and sentenced to life in prison. Although his sentence was eventually reduced to manslaughter, Martin was denied early release based on the fact that he had “shown no remorse and would continue to pose a danger to…”

As for the actual surviving burglar - Brendon Fearon’s prison time served, a total of 18 months of a three year sentence, ended up being significantly less than the three years Martin had to endure for defending his home. And to add insult to injury, the habitual criminal was then given £5,000 in legal aid to sue Martin for “loss of earnings.”

In August 2010, Canadian Ian Thompson woke up to find four masked men standing in his lawn shouting death threats and tossing firebombs at his home and around his property. Sadly, the minute or so it took for Thompson to retrieve his firearm from its locked container, load it, and come out to fire three warning shots at the intruders to scare them off was too short for Canadian authorities, who charged Thompson with having his ammunition too “readily accessible” to his firearm.

What’s the point of having “common sense” gun laws, after all, if you can access your firearm before firebombers are able to successfully burn your house down?

Before settling on the “careless storage of a firearm” charge, which was eventually dismissed by a judge, authorities had tried to charge Thompson with “careless use” and “pointing” a firearm. They apparently realized that a jury might sympathize with a homeowner using a gun against men trying to burn his home down. Thankfully, Thompson ended up beating the rap on this one, but not the ride, which is a testament to a bit of common sense but also to the absurdity of poorly written Canadian gun laws.

In another case of assumed guilt for homeowners defending themselves against aggressors, Andy and Tracey Ferrie spent three nights in jail while British prosecutors mulled over whether or not to charge them with causing grievous bodily harm after discharging a shotgun at a four-man gang who broke into their home in the middle of the night. Yes, authorities ended up doing the right thing in the end, but should they even have been arrested in the first place?

Meanwhile, here in the States, 52-year-old Tonya Wooten was arrested last December and still awaits possible charges after shooting an ex-boyfriend who tried to kick his way into her New York apartment. Her crime? Not having her weapon registered in New York, although it was legal in North Carolina, her previous State of residence.

We could go on and on with cases like this, of course, each with its own various nuances and “what if” scenarios, yet each marked by a common thread of deep injustice, at least to those of us who value the inherent, God-given right to self defense. That common thread of deep injustice is caused, not even by the good and evil yet innately human actions of all the people involved, but by absurd governmental policies and draconian laws written almost as if to target good people who successfully defend themselves against those who would do them harm.

Laws that seem more concerned with the protection of burglars than the victims.

Laws that seem more concerned with whether or not a gun was in the correct spot in someone’s home rather than an individual being allowed to properly defend it.

Laws that seem more concerned with the fact that a firearm was discharged than stopping the criminals the firearms were discharged into.

Laws that seem more concerned with whether or not a firearm is properly registered than giving a woman the right to protect herself from a violent assailant.

Laws that, even if things turn out good in the end, put good people in the tragic position of having to defend themselves for actions that most would consider inherently right.

In the wake of the Parkland shooting, a movement has developed among many of America’s young people, a movement that purports to stop gun violence by banning or at least harsly regulating the guns themselves. Yet, how many criminals will obey the laws they are asking for? Further still, how many otherwise law-abiding new criminals will the new laws create?

After all, if a law is on the books, it’s got to be prosecuted, right?

During Saturday’s “March For Our Lives” event, the few good things the young gun control activists said were sadly overshadowed by the absurd, and one of the most ridiculous was a female student who told the cheering crowd, “Guns do not defend - they kill, maim, and destroy.”

The problem is, as anyone with even a lick of common sense knows, guns in the right hands do defend.

So, how many good people who defend themselves with guns are these demonstrators willing to put behind bars to further their Leftist agenda?

Because that’s ALWAYS the next step.

Years later, Martin is unrepentant for his role in what happened that fateful day in 1999.

“I've said it before, and I'll say it again, every man has to have the right to defend his home,” he told the Daily Mail in 2009. “It's the mark of a civilised society. Nothing that has happened since my trouble has changed my mind of that.”

“The argument has always been that if you had a potential Tony Martin in every town, the burglary rate might well plummet,” The Daily Mail opined. “But would it make our society any more civilised?”

If a “civilised” person can read the accounts that kicked off this article and be unmoved, perhaps we should indeed rethink the definition.