Scott Morefield
|
Posted: Apr 02, 2018 12:01 AM
Share   Tweet
The opinions expressed by columnists are their own and do not necessarily represent the views of Townhall.com. 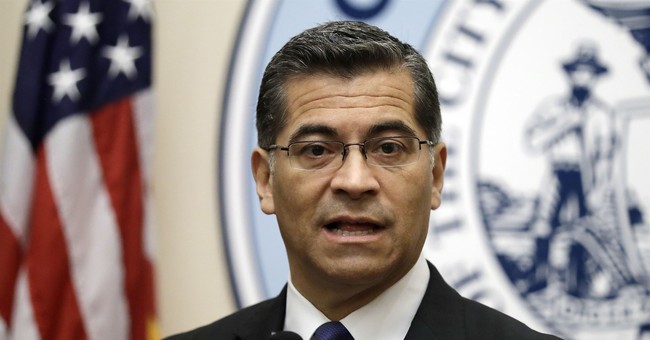 Last Monday, California Attorney General Xavier Becerra announced that his state would be filing suit against the Trump administration, not for conducting a targeted round-up of illegals in the state or even for slapping a coat of paint and some duct tape on a few broken-down sections of border fencing (not that they wouldn’t totally sue for those things), but rather for a simple question the Department of Commerce plans to add a question to the 2020 Census.

“Filing suit against @realdonaldtrump's Administration over decision to add #citizenship question on #2020Census. Including the question is not just a bad idea — it is illegal,” read a Monday tweet from Becerra announcing the lawsuit.

California is far from alone. New York is suing too, as are several other “blue” states. DNC chairman Tom Perez slammed the question addition as "a craven attack on our democracy." Former Obama Attorney General Eric Holder called it an “irresponsible decision.”

Nevermind that the Justice Department ASKED census officials to include the question so they could better enforce the Voting Rights Act. And double-nevermind the fact that the Trump administration never stated that they weren’t planning to actually count noncitizens.

In one of those rare instances where liberals pretend to actually care what the Constitution says, Becerra cites the founding document’s requirement to conduct an “actual enumeration” of the nation’s population every 10 years, regardless of citizenship status, to lend credence to his argument that the Trump administration proposal is somehow “illegal.”

Problem is, asking about citizenship on the U.S. Census is far from new, much less some sinister Trump conspiracy. In fact, prior to the 1960 census, citizenship questions were regularly included on the form, and even appeared on some long-form questions from 1970 to 2000 because, as University of Wisconsin history professor Margo J. Anderson tells CNN, "We passed major new immigration legislation in 1965, and so the question became relevant again."

Which begs the question - when has the issue of immigration and citizenship ever been as “relevant” as it is now?

So obviously, there’s more to all the liberal hyperventilating than that.

Which brings us to the two major reasons liberals are so up in arms about this simple question, and they’re both, well, sooo liberal - power and public perception.

This one is obvious, and everyone admits it. A January Washington Post headline reads, “Potential citizenship question in 2020 Census could shift power to rural America.” ABC quoted an analyst who stated that, of the 18 seats reapportioned as a result of the 2010 census mainly as a result of the 40 million immigrants therein, “16 went to states that voted for President Obama in 2012,” concluding that “from a partisan perspective, immigration tends to benefit Democrats.”

Becerra’s tweet mentioned above also included a link to his San Francisco Chronicle article entitled, “Citizenship question on 2020 census may result in undercount.” In it, Becerra and Alex Padilla argue that class sizes, homeland security funds, transportation resources, and even natural disaster preparation would be “jeopardized,” and California’s “voice in government diminished” should the 2020 census result in an undercount.

“The Trump administration is threatening to derail the integrity of the census by seeking to add a question relating to citizenship to the 2020 census questionnaire,” write Becerra and Padilla. “Innocuous at first blush, its effect would be truly insidious. It would discourage noncitizens and their citizen family members from responding to the census, resulting in a less accurate population count.”

“California, with its large immigrant communities, would be disproportionately harmed by depressed participation in the 2020 census,” they continue. “An undercount would threaten at least one of California’s seats in the House of Representatives (and, by extension, an elector in the electoral college.) It would deprive California and its cities and counties of their fair share of billions of dollars in federal funds.”

Calling the request an “extraordinary attempt by the Trump administration to hijack the 2020 census for political purposes,” Becerra and Padilla argue that “Immigrants and their loved ones understandably are, and will be, concerned about how data collected in the 2020 Census will be used.”

Because Trump, of course.

Reading from the same playbook, Bloomberg writes, “Given the anti-immigrant and anti-minority rhetoric from President Donald Trump and many on the political right, Hispanics, immigrants and members of minority groups probably start by being concerned about answering any survey questions. A citizenship question would only make this problem worse.”

Even so, enough illegal immigrants answer the census for liberals to be rightly concerned about some of their power base. And they’re not wrong to be at least a little worried, which is all the more reason why conservatives should push for this at all costs. While the federal apportionment process is constitutionally determined, there’s nothing to stop states from using citizenship data to determine THEIR legislative districts, as well they should.

The second reason liberals are hysterical over the citizenship question is one they aren’t likely to admit (but that doesn’t make it any less true).

“Nothing to see here, move on” liberals say, as they insist that the actual number of illegal immigrants has been at around 11 million for well over a decade now, and may even be declining. Illegal immigration isn’t a problem, don’t you know, because there are only 11 million of them and that’s apparently a really small number.

Notwithstanding the fact that 11 million is NOT a small number, it IS a number we’ve all gotten used to. But what happens if even a depressed illegal immigrant census count exposes the number as well over 11 million, especially if you account for the depressed response rate? How will a number of, say, 20 million, or, as Ann Coulter surmises, upwards of 40 million, sit with the majority of Americans?

At this point, might more be willing to support President Trump on a functional border wall to bring the invasion to a grinding halt?

Perhaps Diamond and Silk said it best when discussing the issue on Saturday’s Watters’ World: “They don’t want us to know who is exactly in our country.”

Which is all the more reason to find out.