Obama to U.S. Military: Stand Down 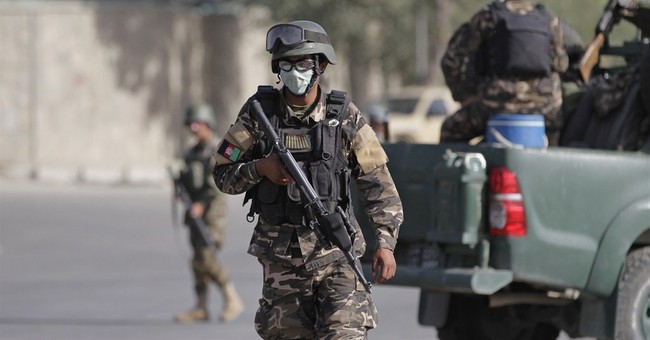 Fires raged throughout the consulate and nearby CIA annex. In a solitary corner of the compound, the American flag lay torn, singed and soiled. Inside, Christopher Stephens struggled for his last breath of air. He could hear shouts and gunfire outside. None of that, however, was from his comrades.

There would be no help on the night of September 11, 2012.That was because the U.S. military was given the order from Washington to “stand down.”

In closed door hearings on Capitol Hill today, Congress will ask military commanders with responsibility for forces in and around Benghazi who exactly relayed that order and why. But a closer look at this administration’s record reveals that standing down is a recurring theme. It is an implicit order that is given to the military every day in the Obama administration. It is part of a decade-long dream by the left to neuter our military and ensure that they are no longer able to be the shock troops for a nation that they believe is at the root of the world’s ills.

From Vietnam to Iraq, the left believes the military is an instrument for killing civilians and committing war crimes. The Left long has demonstrated an animus to America’s military. During the Vietnam War, left-wing activists bombed draft boards, threw blood on the Pentagon, and dug graves in the yards of public officials to protest what they saw as the depravity of America’s fighting force. In the Carter and Clinton administrations, this animus was heightened. President Clinton, for example, faced a stunning backlash over his attempt to allow gays to serve openly in the military, earning a rebuke from military leaders. Clinton, who never served in uniform, had a tense relationship with the military at best.

In Barack Obama, the left has a champion of the Blame-America-First worldview, and a closer look at his defense policies from military sequestration to gays in the military to women in combat reveals how openly he has embraced the politics of standing down. The goal is nothing less than eroding the mission and values of the strongest military in the world and forever reducing its capabilities.

Why, you might ask, would our President wish for this fate? Shouldn’t the Commander in Chief’s first priority be to preserve the leading military superpower in the world? Not if your allegiance is to a progressive doctrine and your associates and advisors throughout life have instilled in you an animosity for the U.S. military.

Over the last five years, Americans have seen the repeal of the Don’t Ask Don’t Tell policy. Obama Pentagon officials have taken the next step by by hosting events like this past week’s Gay Pride Day at the Pentagon and initializing gay sensitivity training in the Marine Corps.

We have watched the longstanding tradition of keeping women off of the front lines of combat erased and wartime rules of engagement changed in the name of “gender equality.”

Under the umbrella of political correctness, our military was forced to open their arms to radical Islamists who call our military infidels and sworn enemies. Such as in the case of Maj. Nidal Malik Hasan and the Ft. Hood shooting as well as in the case of Ft. Campbell’s PFC Naser Jason Addo, who was convicted of attempting to use a weapon of mass destruction to blow up a restaurant filled with troops.

Other policies have been put in place to discourage the best from enlisting and becoming commissioned officers. ROTC programs have come under assault at top colleges. Military branches like the Navy are being told they'll have to reduce their tuition assistance programs.

“Sequestration” and the cutting of hundreds of billions of dollars from the defense budget, an idea that was hatched inside the Obama White House, is proving devastating the military’s readiness and morale. Training exercises are being canceled. Ships are being mothballed and aircraft taken out of service.

All of this while our military is being demonized by pop culture. In 2011, well known rap artist Soulja Boy released a video which included the words “F*** the troops,” and Psy a Korean music artist whose fame came to him in America for his song Gangnam Style, released a song promoting the killing of American Soldiers.

Hollywood has also done a great job of villainizing our military men and women with the making of movies like Jarhead, Three Kings, and the upcoming release of The Invisible War, a documentary that aims to put a spotlight on sexual assault in the military.

The ultimate goal is clear -- to neuter America’s military as an effective fighting machine and encourage the development of a global “peacekeeping” force. This is in keeping with the Harvard-Bill Ayers-Ivory Tower distrust and hostility to the American military and preference for a “multipolar” world. The result is an America unable and unwilling to defend its own borders and threats to its people. The war on the military is real. And with eight years with Barack Obama as Commander in Chief, the damage may well prove irreversible.