Scott A. Huesing
|
Posted: Feb 21, 2018 12:00 PM
Share   Tweet
The opinions expressed by columnists are their own and do not necessarily represent the views of Townhall.com. 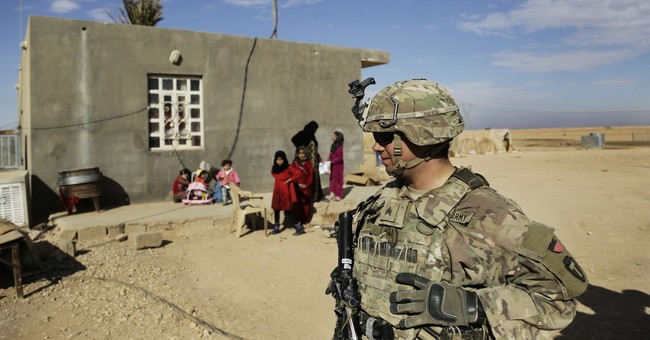 This month I buried two of my Marines from Echo Company, 2d Battalion, 4th Marines, both just over 30 years old. One was lost to our growing number of suicides related to PTS, and the other was killed in a tragic motorcycle accident. Eleven years before their untimely deaths they survived some of the bloodiest fighting in the deadly city of Ramadi, Iraq. I'd like to think that their service to their nation, the sacrifices they made, and the others who fought, died, and were injured alongside them mattered.

In a recent op-ed piece by Carol Morello, (Washington Post, Feb 13, 2018) it was noted how what I refer to as the 'semi-sovereign' nation of Iraq is now asking for $80 billion in handouts to re-build its war-torn country. U.S. Secretary of State Rex Tillerson is planning on acquiring $3 billion of that to come from the U.S. taxpayers. The question is, what is Iraq going to do with the $80 billion?

While Tillerson made a blanket statement on February 13, 2018, declaring, "Iraq open for business…" I'd be interested to know when was the last time Tillerson walked the mean streets of Ramadi or Baghdad.  Or is he just listening to political puppets who paint a grossly inaccurate picture of Iraq being a stable place?

Who is going to perform the construction? What businesses will take seed? It reminds me of an op-ed that I wrote in 2007 for the Marine Corps Times as I was leaving Iraq titled "Turning the Tide." It presupposes that American industry would infiltrate Iraq and build prospering economic establishments like Wal-Mart and Home Depot or other massive industrial giants to help pave the way to prosperity and growth.

The cold, hard fact remains that American corporate giants remain hopelessly homesteaded in the United States. They enjoy the safety and security that our nations' warriors have provided as well as economic growth yet are unwilling to go overseas, and risk—not what my brave Marines and many others did, over the past 14 years—but simply risk expanding outside the safe borders of America. They are reluctant to gamble and build "industrial fortresses of democracy" that can show Iraqis what democracy and prosperity are all about—how building infrastructure, establishing commerce, and building a nation is done.  I'm not implying that we should try to impose American culture on Arab culture—the point is that we are in a position to show them what "right" looks like. American industrial leaders could be plank-owners evolving Iraq into a democracy in the Middle East and showing them what right looks like-but that would take a risk. They'd have to be willing to put some skin in the game as my Marines did.

It's foolish to dole out billions of dollars to a nation that has no idea what to do with the money, no plan in place, and no track record showing forward progress. To the governments around the world opening up their checkbooks thinking they are making an impact on Iraq-I'd caution them to be good stewards of their citizens' tax dollars.

Recommended
One Thing Was Clear in Wyoming Last Night. Donald Trump, Not Liz Cheney, Is the Future of the GOP
Matt Vespa

I agree with President Trump when he says we've spent enough money in Iraq. We've spent enough time. And we've spilled enough American blood for over a decade in a nation that is unwilling to embrace change and move forward into the 21st century. When will Iraqi leaders recognize how much we have given them during this long war to bring peace and stability to their country, and when will they stop asking for more handouts and take ownership of their people, security, and prosperity? When will one of the most oil-rich nations in the world take responsibility for its sovereignty and stand on its own two feet? If the government of Iraq can't do it, our industrial trailblazers in America have a unique opportunity today to lead; to step up and show Iraq the way.

We need to know as Marines and veterans of this long war that what we have done over the past decade mattered. Make it matter.