Tiger's Story Has Consequences for Us All 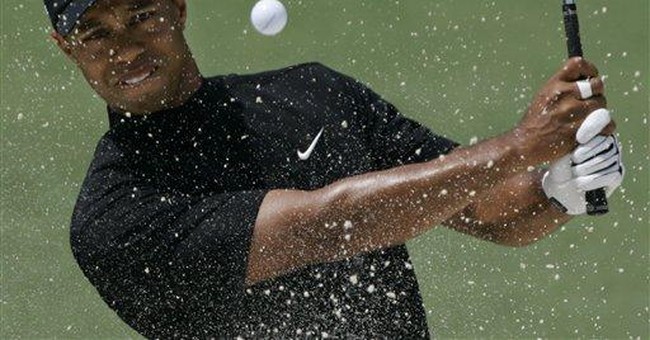 The current scandal surrounding Tiger Woods ought to serve as Exhibit A of why we can’t live our personal lives irresponsibly without it having an effect on the culture. Serial adulterers, cohabitating unmarried partners and homosexual unions all undermine the very foundation of society which is marriage.

How does marriage form that foundation? By providing a healthy channel for our sexual needs, combining powerful drives with commitment to form a building block upon which children are nurtured and taught in security and love. Family bonds are forged, confidence built, gifts explored and the world ordered, releasing us to use our God-given abilities to better it rather than squandering them in a pursuit of lust.

What person reading this would enthusiastically endorse a culture where marriage vows are broken without restraint, the hearts of children routinely broken, the economic stability of homes ravaged, children left to raise themselves with the help of video games, television, the Internet and the iPod? Left to believe that sex is the most important focus, learning early how to engage in it, identifying themselves not by gifts but by urge, today’s children are doomed to repeat the sexual dysfunction that surrounds them. How can a society like that survive and who would encourage it?

Yes, we’ve been convinced that having sex before marriage and, further, living with a potential spouse is a good thing. How can we buy a car when we haven’t driven it? But if we understood the real bond involved in marriage and the fact that that bond is undermined and sabotaged by the very act of giving ourselves without commitment, would we be so quick to shed our boundaries? Does a heart ache less after entering the strong sexual bond and having it broken without vows spoken? How do we feel about our laissez faire attitude towards sexuality when we see the increasing amount of teen suicides by boys as well as girls as a result of rejection after intimacy? Does the fact that cohabiting couples who later marry have an exponentially higher rate of divorce than those who wait get our attention at all?

And do we really want a society where men marry men and women women? Are we okay to give a wink and a nod to something that defies biology and nature and never fully satisfies the gay friends we love? Are we okay that the gay marriage charade includes an average of eight “extra-marital” liaisons per year for male partners, exposing them not only to disease but heartache? Are we okay to give tacit approval to a union that lays a weak and confusing foundation for any child brought into it—one that researchers have found is more likely to produce children who are more promiscuous, more likely to explore these same alternate lifestyles and use drugs? Is that what we want as a society? And do we want children in public school encouraged to explore homosexuality, propagandized with literature and clubs and special days promoting sex of any kind—even in kindergarten? Do we want parents who object to this agenda be denied their right to object?—to lose their right to protect their own as has happened in Massachusetts, the crown jewel of homosexual marriage?

But what about Tiger Woods? While some have been appalled, others have crowed and preened. This is what real men do. Especially men of Tiger’s good looks and economic fortune. Powerful men need to conquer. It’s as natural as breathing. This is the way all men would be if only they had the opportunity. Many men privately envy him. Discussions of marriage have broken out all over the country. Why would a man like him ever want to marry? With all of his money, talent and prestige, why would he ever want commit to one woman? Has Tiger Woods personal behavior had an effect on our culture? You’d better believe it.

But while the sports talkers and macho men among us secretly envy him and allow seeds of discontent to undermine their own marriages, we all pay the price. Women feel insecure and unloved … men feel restless and distracted … and children pick up on it all.

There is a man who grew up in Zimbabwe, raised by parents of integrity in a long-term, committed marriage. He came to the U.S. young and strong … an athlete who had never known a woman sexually. He believed that the woman who should be that to him should also be his wife. He met a beautiful, young cheerleader of equal character. They committed their lives to each other. They went back to Zimbabwe … lived through the war that resulted in the name change from Rhodesia. They raised five children who never feared for the foundation of their family. Their kids respected their father and mother so much they wanted to emulate such a family. Thirty years later these children have their own children and are passing on the same legacy. In all these years, the man has loved his wife. His family is beautiful, his grandchildren a tribute to them all. No string of beautiful blonds for him, no secret trysts and no distractions from the call of family devotion.

Which is the real man? The one who controls his passions and devotes himself in this way—or the one who indulges himself?

And for that matter … what kind of people do we all want to be?

Do our private choices have an effect on society? Of course they do. The cycle of sexual dysfunction is deep, but it can be overcome. As difficult as sexual control is, the benefits are immeasurable.

Ask Tiger today if his bank account can make up for the look of pain on his wife’s face or the potential of having his little children grow up not to honor but to model him.

Sex is a powerful force to build the necessary foundations for real happiness and strong societies. In a committed marital relationship, it can bring the intimacy we all long for—men and women alike—and satisfaction beyond measure to those willing to exercise self control. We are responsible to each other and to society to get this right.