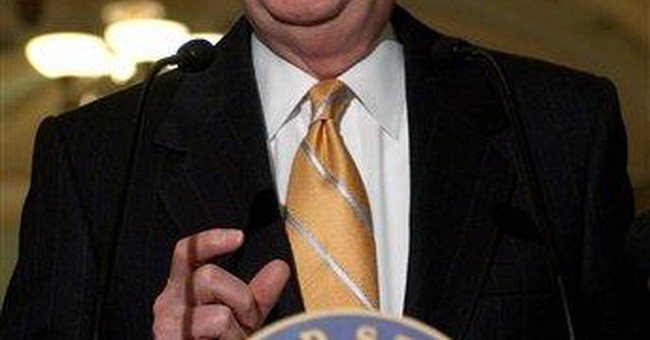 On May 22, Senate Minority Leader Mitch McConnell gave a speech about judicial nominations in the U.S. Senate, calling out Senator Harry Reid for breaking his commitment to get judicial nominees a vote on the Senate floor. McConnell said there would be consequences, and on June 4 he proved it by slamming on the brakes in the Senate.

With the California Supreme Court’s gay marriage ruling a couple weeks ago and the Second Amendment case about to be decided by the U.S. Supreme Court, the issue of judicial nominations could heat up. If so, it could deliver some swing states in the presidential election and in close Senate races.

The Constitution gives the president the authority to nominate judges, and the Senate the power to confirm them. The Founding Fathers made it clear that the president’s appointment power was broad and the Senate’s role was limited. The Senate was only to ensure that the president’s nominee was a person of fit character. As Alexander Hamilton explained in The Federalist No. 76, the Senate should rarely withhold approval and only when there are extreme reasons, such as the nomination of an unqualified friend or family member.

For 200 years that was usually the way it worked. The Senate only denied confirmation if there were problems with a nominee’s education, experience, or integrity. Otherwise nominees were confirmed regardless of their political beliefs. That’s why conservative Antonin Scalia was confirmed to the Supreme Court 98-0, and liberal Ruth Bader Ginsburg was confirmed 96-3. They were top graduates from top law schools, with stellar careers as federal appellate judges and good character.

But things have gone badly astray. Throughout President Bush’s tenure, Senate Democrats have increasingly slowed or stopped nominations not for reasons of qualification or character but because they suspected the nominee was conservative. It started in 2001 when Judge Charles Pickering was nominated to the Fifth Circuit. Judge Pickering had support from diverse groups in Mississippi, including that of local black civil rights groups for Pickering’s stand against the Klu Klux Klan. The accusation against him? That he was racist. The real reason for the opposition was that Pickering is an evangelical Christian.

Some good nominees, like William Pryor, Priscilla Owen and Brett Kavanaugh were eventually confirmed. Others, like Miguel Estrada, were not.

As Senator McConnell explained, Peter Keisler, the former assistant attorney general of the Justice Department’s civil division, was nominated to the U.S. Court of Appeals for the D.C. Circuit. He’s been waiting for 700 days for an up or down vote. Attorney General Keisler graduated from Yale Law, clerked for the D.C. Circuit and the Supreme Court, served as associate White House counsel, and has had a phenomenal legal career.

Another is the chief judge of North Carolina’s Western District, Robert Conrad. The Fourth Circuit has so many vacancies that it has been designated a judicial emergency. Chief Judge Conrad was nominated to a seat on the Fourth Circuit, and has been waiting 300 days for a vote.

Senator Reid gave his word to Senator McConnell that at least three nominees would receive votes by Memorial Day. Senator Reid, working with Judiciary Committee Chairman Pat Leahy, only allowed a vote on one nominee.

Senator McConnell promised consequences. The Senate is a body where many technical issues are usually passed by unanimous consent. If the Republican minority starts raising objections, it would make life in the Senate difficult for the Democratic majority.

Senator McConnell proved that on Wednesday. When a bill amendment is offered the clerk must read it unless no senator objects to skipping the reading. Reid put forward Senator Boxer’s substitute version (an amendment) to the Lieberman-Warner bill. McConnell objected, forcing Reid to either have the clerk read the whole thing or drop the bill. The Boxer substitute was 491 pages.

Judges were a major election issue in the 2002 and 2004 elections. Moderate voters believe judicial nominees are entitled to an up or down a vote, so the issue favored Republicans. The issue narrowly turned a couple Senate seats for Republicans, and helped President Bush win reelection. Then the issue faded.

Recent developments could reinvigorate this issue for November’s elections. California declared that there is a right to gay marriage in its state constitution; marriages are scheduled to begin in two weeks. And a week after that the U.S. Supreme Court is likely to hand down its decision on the D.C. gun ban in the Second Amendment case of D.C. v. Heller, which will be a wake-up call to millions of gun owners that federal judges have a lot to say about their constitutional rights.

These cases remind voters that judges matter. At least two Supreme Court justices are likely to retire over the next presidential term. Changing even one seat on the current Court would have profound effects. With courts determining basic issues like marriage and gun rights, millions of voters will consider the importance of judicial nominations in casting their vote if—but only if—the issue is presented to them clearly and forcefully.

Mitch McConnell is right to bring this issue to the attention of the American people. Judicial nominees deserve up or down votes, and McConnell should keep up the pressure until they get them.