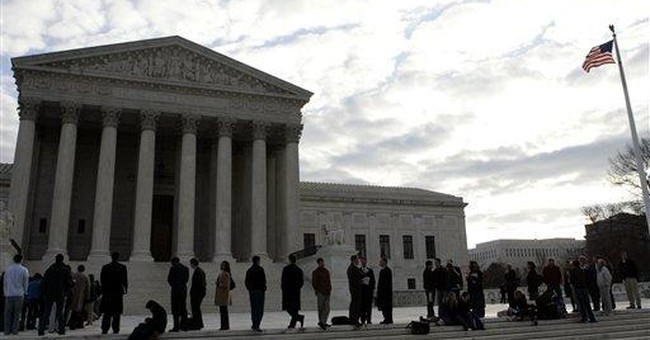 The Bush administration missed a golden opportunity to stand up for the Second Amendment when it filed a Supreme Court brief that only gives lukewarm support to gun rights, asking the Court to send the case back down to apply a lesser standard of legal protection to the Second Amendment. Presidential candidates should tell us where they stand on the government’s position.

The Office of the Solicitor General (OSG) is the Justice Department branch representing the federal government in the Supreme Court. Its briefs carry great weight as the official position of the United States. OSG filed a brief in DC v. Heller, the case regarding the DC gun ban (previously titled Parker v. DC).

This brief reaffirms the Bush administration position that the Second Amendment guarantees an individual right applying to private citizens. It says that right should be subject to what is called “heightened scrutiny.” And it makes it clear that the DC gun ban should be abolished.

But the brief filed by OSG is nonetheless disappointing. Though calling for heightened scrutiny, it says the Court should apply “intermediate scrutiny.” While intermediate scrutiny may be appropriate in some situations, it’s not a strong enough standard to apply to a law that says a person cannot have a handgun in their own home for self-defense, as the DC gun ban does. Such a law should be categorically unconstitutional, which is what the DC Circuit Court held.  Such a law should be subject to the highest level of scrutiny, called “strict scrutiny,” to make sure that the law is narrowly tailored to achieve the desired result.

Also—disturbingly—though OSG affirms that the Second Amendment secures an individual right, it does not call it a “fundamental right”—which is very important for legal reasons—and asks the Court to deny it the level of protection of a fundamental right.

This brief is a mixed bag. Some say it takes the side of DC. Not so. Asking the Supreme Court to reverse the DC Circuit Court’s decision would take the side of DC, and OSG clearly does not do that.

But it does not ask the Court to affirm the DC Circuit Court judgment in favor of Heller, either. Instead, it asks the Court to vacate (or throw out) the lower court opinion, and send the case back for a rehearing applying a lesser standard of review to the rights embodied in the Second Amendment than are typically applied to other amendments in the Bill of Rights, like the First and Fourth Amendments.

Each presidential candidate must speak out on this brief. The Justice Department has not gone far enough to support the fundamental rights guaranteed under the Second Amendment, and so those who aspire to lead our nation must step up and call on the Supreme Court to affirm the judgment of the DC Circuit striking down the ban.

This is a chance for all the GOP candidates to show what they’re made of, distinguishing themselves from the Democrats. With Bill Richardson out of the race, the remaining Democrat candidates all have an “F” rating from the NRA.

Mike Huckabee and Fred Thompson have outstanding records supporting the Second Amendment. Here’s their chance to make that an issue in the campaign, reminding gun owners of their unwavering support for our civil rights.

John McCain has had a rough time with gun owners, mostly over campaign finance reform and efforts to federally regulate private sales at gun shows (dealer sales are already federally regulated.) But for many years before that he had a solid record on the Second Amendment, and he’s stepped back up to the plate in recent years, opposing reauthorization of the Clinton Gun Ban, becoming a cosponsor of the tort reform bill to end junk lawsuits against gun makers, and cosponsoring federal legislation to repeal the DC gun ban. Speaking out on this issue would be welcomed by gun owners.

Rudy Giuliani should take every chance he can get to impress gun owners. After years of unfriendly policies and actions in NYC, the former mayor has to make the case that he’s worlds apart from Hillary and Obama on the Second Amendment. To his credit, Giuliani has said that the DC Circuit was correct in this case, that the Supreme Court should affirm that judgment, and that the DC gun ban is unconstitutional. He needs to make that a theme in his campaign. As the legal heavyweight in the GOP field, he should make the most of this opportunity.

Mitt Romney has the opportunity to gain back the ground he lost with gun owners last month when he endorsed the Clinton Gun Ban and the Brady Bill on Tim Russert’s Meet the Press. Unless he wants to lose Second Amendment supporters by the droves, he had better come out on the right side of this OSG brief. In fact, Romney should retract his ill-advised endorsement of the cornerstone legislation of the Clinton gun control agenda.

All of these Republican candidates should speak out on his issue, and challenge their Democrat opponents to do the same.