Will the #Resistance Summer Dampen the Democrats' Big Autumn?

Salena Zito
|
Posted: Jul 10, 2018 12:01 AM
Share   Tweet
The opinions expressed by columnists are their own and do not necessarily represent the views of Townhall.com. 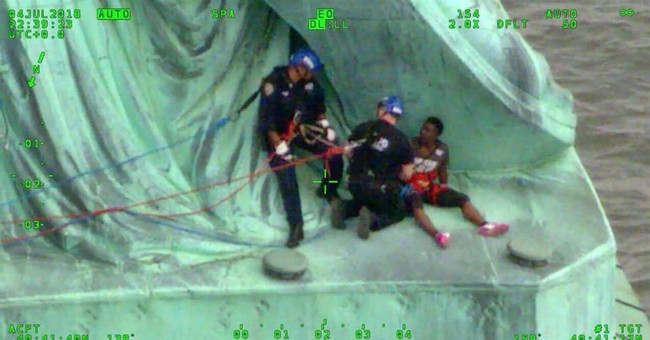 NEW YORK -- Last Wednesday afternoon during the height of the Fourth of July festivities at the Statue of Liberty, Therese Patricia Okoumou began scaling Lady Liberty and held a T-shirt up that said "Trumpcare Makes Us Sick" on one side and "Rise and Resist" on the other.

Despite telling authorities she would not come down until "all the children are released," she eventually descended from the skirts of the statue base after a team of over a dozen highly skilled New York City police officers and their emergency service unit cajoled her.

Her protest evacuated Liberty Island, turning away over 4,000 people who had planned to visit what is arguably America's most iconic symbol of liberty as part of their family celebration of the signing of the Declaration of Independence.

What Okoumou did get was a lot of attention on her and less on her stated issue.

Okoumou, who goes by her middle name, immigrated to the U.S. from the Democratic Republic of the Congo and has a long history of political protests in her adopted country. She certainly isn't the first person to use the Statue of Liberty as her stage to dramatically air her grievances in this country. And she won't be the last.

You have to wonder how her theatrics, or perhaps dozens of others hopefully not as dramatic, will move voters in this November's midterm elections.

Democrats are not going to win Congress by winning #Resistance-heavy cities like New York, Chicago, Los Angeles and Washington, D.C., or college campuses across the country. The swing districts are just outside the urban centers in places like suburban Virginia and the suburbs of Atlanta; Austin, Texas; Philadelphia; Detroit; Cleveland; Kenosha, Wisconsin; and Pittsburgh. There you find Republican voters who are up for grabs; they're not big on President Trump, but they are also not all that into the antics and stridency of the resistance.

The hot protest cause of the summer is abolition of the U.S. Immigration and Customs Enforcement.

It is an activist cry that has gone mainstream in the Democratic Party, embraced by Sens. Kirsten Gillibrand and Elizabeth Warren. Alexandria Ocasio-Cortez, the Democratic socialist who unseated House Democratic Caucus Chair Joe Crowley in a Democratic primary, proudly waved the "Abolish ICE" banner.

Gone are the days of the "Better Deal" slogan that the Democrats rolled out last year for their midterm platform.

The question has gone from "What happens if this becomes part of the Democrats' midterm platform?" to "How do Democrats win on it?" And the even larger question is "What exactly is their core message for November?" Be against Trump? Be against Trump and his voters, and celebrate when Hollywood mocks them and restaurants refuse them? Or is it a combination of that and free public college tuition, the abolition of ICE and the creation of Medicare for all?

And do the optics and messages from the protests help them or hurt them? There is a chance that the upper hand they may have had from the optics of separated children is drowned out by an overplayed hand in a crowd of angry protesters or a social media meltdown.

It appears, at least for now, that the progressive left rejects the pragmatic approach of the Democratic establishment. It looks like Trump is once again benefiting from Democrats' unforced errors.

What Democrats do have going in their favor as they head into the summer of decision is higher voter turnout for their primary contests, and their folks are pumped.

What they can't seem to settle on is a pragmatic enough message to form an enthusiastic base that could vote side by side with unhappy Republicans and moderate Democrats.

The base telegraphs "We don't need you" to lost Republicans and moderate Democrats, often bluntly and without apology.

Walking out of the courtroom to face reporters last Thursday, Okoumou proudly wore a T-shirt reading "White Supremacy Is Terrorism."

Resistance activists celebrated her on social media, calling her a hero and courageous for her theatrical and illegal protest. If the resistance becomes a summer of theatrics, it's hard to imagine a blue wave taking out as many Republican House members as leadership hoped, squandering an opportunity that was theirs for the taking and likely fracturing the Democratic Party even more than it already is.