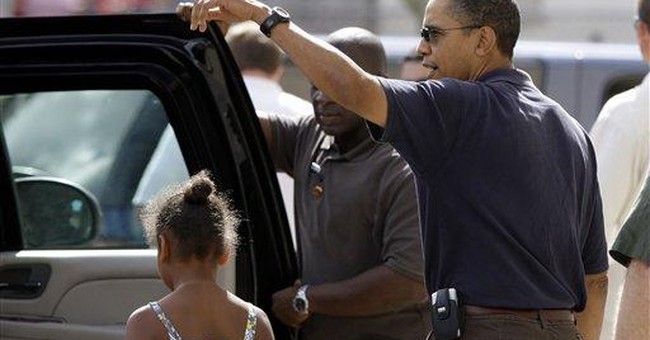 Take President Obama’s poor timing in response to a failed terrorist attack on a U.S. jetliner, add the politicization of that event by his surrogates and a ridiculous message by Homeland Security Secretary Janet Napolitano, and what do you get?

A complete failure when it comes to a commander-in-chief’s most important job: Protecting Americans from harm.

“It was arrogant and stupid,” one Democrat strategist, who supported Obama the candidate, admits privately.

“The president needed to set the initial tone on a matter of such importance,” said Mark Rozell, professor of public policy at George Mason University. “Press secretaries don't calm and reassure an anxious public – that’s the president's role.”

The symbolism of Obama’s press secretary speaking out while the president vacationed in Hawaii was all wrong, he said – “Especially when you add the Homeland Security secretary's incredible comment that the system worked.”

It all contributed to an impression of an administration unprepared to deal with a security threat or a real crisis.

“The president's silence for three days is perhaps the hardest of all to understand,” Rozell added.

As for the Bush comparisons that have become the fabric of any discussion of Obama’s leadership, well, sorry – Barack Obama is president today, not George W. Bush. So man-up and lead.

“Americans probably wanted to see toughness from Obama in this case, and some interpreted the lack of response as the opposite,” said University of Virginia political scientist Larry Sabato. “ ‘The system worked’ mantra made the situation worse.”

The White House itself politicized the event Monday when it sent deputy press secretary Bill Burton out with a statement outlining Robert Gibbs’ Sunday-talk-show-crawl, in which Gibbs made clear the administration is “winding down the war in Iraq and increasing resources in Afghanistan and Pakistan, where those terrorists are.”

“First of all,” says former CIA operative Bob Baer, an outspoken critic of U.S. intelligence-gathering and anti-terrorism efforts, “what happened on Christmas Day has nothing to do with Iraq or Afghanistan.

“I am unclear on what that message has to do with what happened on the plane.”

The problem for Obama originates with Obama himself: His policies and rhetoric since the day he became president have created an illusion that we don’t have a terror problem. He and his team even have gone as far as to remove "war on terror” from the White House lexicon, replacing it with "overseas contingency operation."

What we want from our president is gravity and leadership. The first hint of a deficit in those attributes came in November, when Army Major Nidal Malik Hasan murdered a dozen fellow soldiers and wounded 20 more at Fort Hood.

It took days for Obama to react; when he finally spoke publicly, he did several "shout-outs" to the crowd before even mentioning the tragedy.

“I cringed,” admits the Democratic strategist, who specializes in messaging.

Typically, Americans unify behind a president when a threat to the country occurs. Thus, it is politically very risky for Republicans to criticize Obama's leadership in this area.

Yet Americans are not completely foolish; they can figure things out for themselves, and they don’t need Republicans pointing out the obvious.

“I suspect that it is more likely in the coming days that there will be a push toward unity by both parties and that the blame-casting will subside,” Rozell speculated.

“We can unify behind this in Congress. It is one thing that both parties agree on, leadership and accountability in keeping us safe,” assures U.S. Rep. Pete Hoekstra, R-Mich., ranking Republican on the House Intelligence Committee.

Hoekstra, however, is very critical of the White House for its lack of cooperation in examining how the government has failed on such incidents as Fort Hood. It makes him and other critics wonder if the administration is throwing up roadblocks because it is concerned that the story line will become "asleep at the switch."

Obama's latest admission that the system did not work has helped, to some degree, to reassure people that he understands the gravity of the situation and is committed to dealing with terrorists.

Yet as Toby Harnden, editor of the UK Telegraph, quipped: “Obama may have rather smugly given himself a ‘B+’ for his 2009 performance but he gets an ‘F’ for the events that led to Umar Farouk Abdulmutallab boarding a Detroit-bound plane in Amsterdam with a PETN bomb sewn into his underpants.”