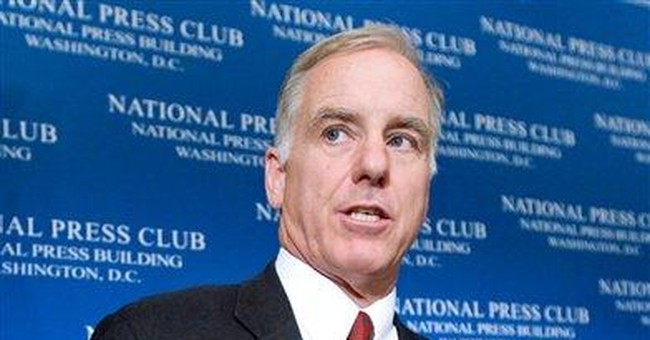 Americans have a stunning visual of what political “owesies” can be, thanks to Illinois Gov. Rod Blagojevich’s bleep-filled pursuit of political paybacks.

Yet there is a more reasonable side to rewarding individuals who help a candidate to win.

“While Kennedy provided Sen. Obama with the imprimatur of a legitimate Democratic candidate, one in particular who was more liberal rather than centrist, Gov. Dean was more important for Sen. Obama’s campaign,” says Villanova University political science professor Lara Brown.

Brown believes Dean’s stridency regarding the nomination calendar and punishing the “rogue states” of Michigan and Florida was critical to Obama's win.

Add to that Dean’s “50-state program” (putting political workers and cash in every state), his awakening of the progressive movement, and the “net-roots” Internet blueprint he created during his failed 2004 presidential run, and you’d think Dean would be welcomed by the new administration.

So far, not so much.

The perfect place for Dean, Democratic insiders argue, would have been as Health and Human Services secretary, which went to the Democrats’ former Senate majority leader, Tom Daschle. Word is that Daschle was reluctant to take such a bureaucratic position, so a czar-like power was added by having him oversee a new White House health-reform office.

“Daschle is much better-suited,” says Franklin and Marshall College political scientist Terry Madonna. “He knows senators … and has the experience it will take to work with the Congress” on such issues as universal health-care coverage. “Dean has been too much of an outsider to help Obama here.”

Madonna argues against rewarding Dean for doing the right thing. “Do we give him credit for upholding his own party's rules -- he gets a reward for doing what's right? This is not a profile-in-courage here.”

Yet Villanova’s Brown is unsure, based on all Dean has done, why he does not appear to be moving into the administration.

The clash between the two party chairs during the 2006 midterm election is legendary: Emanuel ran the party’s congressional arm back then and divided bitterly with Dean over cash. With Emanuel now Obama's right-hand man, it makes sense that Dean’s name is not being circulated.

Gates says that not putting Dean in the cabinet shows Obama places a higher premium on unity than loyalty, adding: “Dean does his own thing and has too much power with party activists to keep around.”

Dean made his share of enemies as party chairman, but progressives -- and out-of-work Republican officials -- will argue that he was more right than wrong about the party needing a presence where it previously had little.

High-level figures often don’t initially land significant positions in a new White House. Ronald Reagan had no room at first for George Shultz; Charles Duncan lost out as defense secretary under Jimmy Carter; Averill Harriman and Richard Holbrooke had to work their ways back under JFK and Bill Clinton.

Political scientist Bert Rockman cautions that not all cabinet positions have been picked yet, so there is still time for the good doctor to cancel his train ticket back to Vermont.

CNN political analyst and former Democratic operative Donna Brazile counts herself as a Dean fan: “As chair, he brought with him a compass, a flashlight and a strategy to basically plant seeds of hope in all 50 states.

“He deserves some credit for this new season of possibility.”