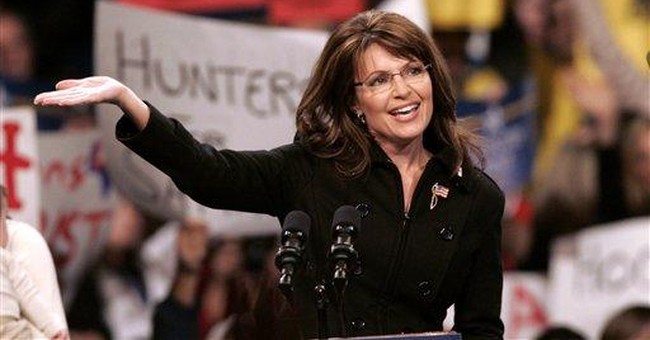 Sarah Palin sat down Friday night with Tribune-Review political reporter Salena Zito for a wide-ranging interview that covered the economy, education, energy and the Alaska governor's approach to governing. It was Palin's first face-to-face interview with a print reporter as Republican vice presidential candidate. John McCain's running mate was in Pittsburgh for a fundraiser at the Westin Convention Center Hotel, Downtown.

About stimulating the economy:

Palin: Energy independence ... certainly will stimulate our economy, circulating the dollars that we're presently spending overseas and in other countries; ... but also the clean coal technology that we got to be able to tap into; and the alternative sources of energy; and also, and as we wean ourselves off the hydrocarbons, the conservation efforts that Americans have got to undertake. So, we got that all-of-the-above approach towards energy independence that we need.

Palin: My husband and I ... owned a business ... and struggled to figure out how are were going to offer (employees) health care and make payrolls, some months, of course, being such a struggle. And then ... my sister and her husband just opened up a service station up there in Alaska also. And I think of my sister, Heather, and her husband, Kurt, and I think now how will increasing taxes on a small business like theirs help them? It will not help them. It will prohibit Kurt from hiring more employees and then those people who cannot get that job, they will become more and more reliant unfortunately on kind of a bureaucratic system that sometimes in a way penalizes hard work and productivity. So it’s win-win if business taxes are reduced like I did in the city of Wasilla where I was mayor. I eliminated small business inventory taxes, wanting again for small businesses to be able to grow and prosper and thrive.

Palin: I’m a governor of a state where I believe in state’s rights and John McCain too. ... As a federalist, he’s saying -- come on -- let our states and let our local districts have more control of curriculum, have more control of their districts, get the federal government out of the business of telling our local districts what they can and cannot do, especially unfunded mandates coming down from the feds ... too many politicians in D.C. (are) so out of touch with the most responsive and responsible level of government -- that’s the local level; that’s your city councils and your borough assemblies and your county commissioners and your local school districts. Let them have more say and more control and really that is the way to turn things around in education also.

How her experience as a mayor and Alaska governor has prepared her to be vice president:

Palin: Yeah, well, I think, of the four candidates, I’m the only one with the executive experience. That needs to be put to good use here, because of course, it’s an executive office that I’m seeking there, and as a mayor and manager and as a small-business owner, as a governor, as a commissioner of regulating oil and gas, that executive experience will be put to very good use. But you know I think even more important than that ... is the world view that John McCain and I share. And that world view is that America is, of course, for good in this world, and we have such a great potential here. We’ve got to get our economy back on track so that we can start reaching that potential. Our world view, too, ... is the vision that Ronald Reagan used to talk about that America just being a beacon of hope for others seeking tolerance and freedom and equal rights, women’s rights. That America needs to be allowed to get back to that place in our world.

About how being a woman would affect her approach to vice presidential duties and decision-making:

Palin: I believe we, perhaps, have less patience for some of the baloney that goes on and some of the time that is wasted, that I think as moms, as women, we don’t have the patience in terms of allowing time to be wasted. There’s just too much to do. So how that would relate to politics is –- I’m not going to let and I’ve never let -- obsessive partisanship get in the way of just doing what’s right for the people whom I’m serving, that’s forced me to take on my own party time and again, and you know I’ve ruffled feathers along the way, too, but it always comes back to, come on, we’ve got work to do, let’s go, don’t have any time to waste.

About her advocacy for special needs children. Her infant son Trig was born with Down syndrome:

Palin: Even before Trig was born, I was a strong advocate for increasing funding for special needs kids in our schools and that’s what I did in Alaska. We increased ... state funding, 20 thousand per student up to $70,000 per special needs student to allow equal access to education opportunities for special needs kids. It comes down to my belief that every innocent human life is to be cherished and provided opportunity. So being able to live that out in a position in the vice presidency I think will be very good for our nation and not just those with special needs and their families but for all of America.

About the role of coal in America's energy independence. Pennsylvania is the nation's fourth largest producer of coal:

Palin: It’s so abundant, we’ve got to use it. It’s got to be environmentally friendly, the development of new technology also. The jobs that can be created as we figure out the clean coal technology ... we can then ... share with other nations like China and other areas that right now are producing the coal, but do not have the stringent oversight ... and do not have the technology ... to clean up our environment as the production takes place. We should be developing the technology, selling it to China and these other countries, and we kill a couple of birds with one stone. We allow those nations also to be productive, but at the same time we clean up the air, the water, the environment, and it can be American ingenuity that gets us there, and, again, that goes back to the bigger picture here where America can be a beacon of hope. There also as we’re making this world a cleaner, better, safer, healthier place, creating jobs at the same time, allowing our own economy to be bolstered with energy independence that this new technology can provide. It’s all win-win.

About establishing a better way for federal money to get to states and communities:

Palin: There’s nothing wrong with a state, with a governor or a mayor requesting of the federal government a share of the federal budget. That’s what the federal government takes our, parts of our, income and puts it in a big pot of money and then they distribute the money. There’s nothing wrong with the mayor or governor asking for that. The problem is the abuse of the earmark process -- those 11th hour behind-closed-door deal-making things ... that John McCain has just been disgusted about and has promised the reform. ... Priorities can be set via a local community’s processes and then have the federal government vet what those projects are and see if they’re in the nation’s best interest also. It can be reformed and needs to be.

About reforming the federal government:

Palin: John McCain and I have the track record of showing real change, real reform, I’ve done that on a city level, on a state level, I want to do it on a national level also. And John McCain, of course, having been known all these years as the maverick wanting to put government back on the side of the people and been very successful there in the opportunities he’s had. That’s what the reform is all about. What that proves, too, is we’re not just talk, talking the talk about hope for change some day in the future. No, we’ve got a track record that proves that we’re the candidates who can make this reform happen, to put government back on the side of the American people.

About an investigation -- the report was released after this interview -- that found Palin that violated Alaska ethics laws and abused her power as governor by trying to have her former brother-in-law fired as a state trooper:

Palin: Haven’t heard what all that report is, but we certainly don’t have anything to hide. It’s important for a governor to take on the responsibility of making sure that everybody in her cabinet is in the right place at the right time to best serve the public. I dismissed a cabinet member because he wasn’t the right person at the right time in his position -- dismissed him having nothing to do with telling him to hire or fire anybody else. In fact, he said I’ve never told him ever to hire or fire anybody. ... (T)he buck stops with you also in an executive position ... But thankfully, ... John McCain, never having run with the Washington herd, he has distanced himself from that herd mentality that just kind of gets to protect one another and not be held accountable. McCain wants to be held accountable and so do I.