America’s Fate Rests on Its Protection of Religious Freedom

Ryan Neuhaus
|
Posted: Jan 06, 2020 12:02 PM
Share   Tweet
The opinions expressed by columnists are their own and do not necessarily represent the views of Townhall.com. 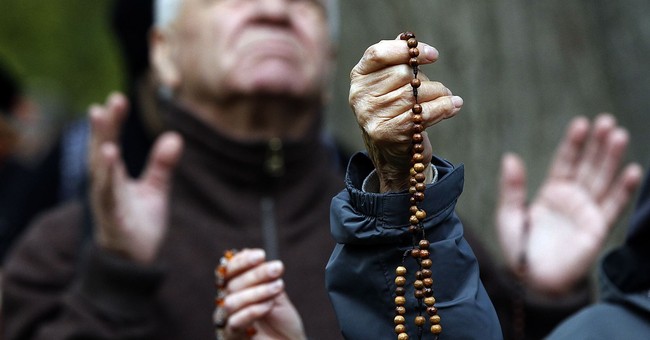 Political leadership and mainstream media rhetoric have led many to question the need for religious freedom in America, saying that it is a tool for discrimination and bigotry. The country has strayed far from the Northwest Ordinance of 1787which declared that "religion, morality, and knowledge, being necessary to good government and the happiness of mankind, schools and the means of education shall forever be encouraged."

In order to determine if religious freedom is an excuse for bigotry or discrimination, one must determine if it permits a man to enjoy individual liberty or is coercive to a certain lifestyle or set of ideals. If not coercive, then the exercise of faith is founded upon a sincere belief that a higher power exists and that abiding by its instruction will lead one to live a meaningful life. Thus, religion is the foundation upon which people of faith must build their philosophic view of life and be freely exercised.

Pew Research has found that a majority of Americans now believe it unnecessary to believe in God to be moral. "No Religion" is now leading Americans' religious identity.  This should be of great concern; religion and public morality are intimately intertwined. Religion holds a unique and central role in civil society as it encourages mankind to cast and follow a vision for a better world. The complete ideological separation of religion and morality exhibits a misunderstanding of the foundational Judeo-Christian principles that the American Republic and Western Tradition are built upon, and if stripped away would lead to its demise.

Only in a society where men sincerely believed in a higher law could the Declaration of Independence have been written, the Constitution adopted, and the American Republic founded. If the values derived from religious beliefs were not accepted as part of the public morality, the basic and inalienable rights of life, liberty, and the pursuit of happiness would not be recognized.

The purpose of pursuing a distinction between church and state was done to build civil and religious liberty, asserting that all of mankind had equal natural rights, but it was never intended to completely separate religion or the exercise of faith from politics. While it is true that the Founders opposed the establishment of a national church, making sure that church doctrine would not determine the law, and that law would not determine church doctrine, they did not separate religion from the founding documents that enshrined the principles the American Republic was founded upon.

Even President George Washington affirmed that religion and morality were intimately intertwined and indispensable to civil society, stating in his Farewell Address, “of all the dispositions and habits which lead to political prosperity, religion and morality are indispensable supports. In vain would that man claim the tribute of Patriotism who should labor to subvert these great Pillars of human happiness--these firmest props of the duties of Men and citizens.”

Religion is necessary for morality to be understood, and moral society is necessary for republican government, as a republican government cannot ethically serve its people in immorality. Therefore, religious freedom is not only necessary in order for a society to live by just laws, but the complete lack of religious practice in society would result in an eventual loss of liberty and individual freedom. As stated by Alexis de Tocqueville in his book Democracy in America, “liberty cannot be established without morality, nor morality without faith.”

Therefore, religious belief and practice should – and must – be accepted as part of the public morality.

It is wrong for religious teachings to be forced upon others, for such reason the American Republic was established with the purpose of securing, not granting, divinely endowed rights that protect humanity from tyrannical oppression and define the purpose of public authority.

One might argue that a religious inclination in the public sphere permits for coercive policies that force those who are unreligious to live religious lifestyles. This, however, is not the case, as religion and reason are not mutually exclusive but are mutually beneficial. Acknowledging the detrimental effects of tobacco and proposing a restriction on tobacco products would not force a person to engage in LDS faith which abides by the Word of Wisdom.

The structure and content of religious freedom in America encourage the exercise of faith in creating just law and must be upheld. While it does not permit the establishment of a national religion, nor governmental action that favors one religion over another, it encourages basic religious beliefs that create a moral society.

It’s true today as it was in 1922, “America is great because she is good, and if America ever ceases to be good, America will cease to be great.”