Dr. Martin Luther King and the Social Injustice of Abortion

Ryan Bomberger
|
Posted: Jan 18, 2016 9:08 AM
Share   Tweet
The opinions expressed by columnists are their own and do not necessarily represent the views of Townhall.com. 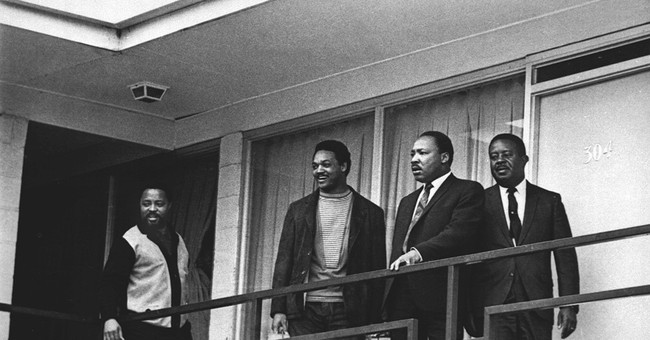 Today, we honor a man whose words agitated, illuminated, inspired and liberated millions. Martin Luther King Jr. was a civil rights warrior with weapons, not of blade or bullet, but of ideas. In 2016, those ideas are spoken by many, yet followed by few. We’re a nation still obsessed with the hue of our skin (hello #BlackLivesMatter movement), while ignoring the more valuable substance that lies within. To our own detriment, we often judge a book by its glossy cover.

Martin Luther King Jr. was no different. He became enamored with the facade of Planned Parenthood and its glossy cover of family planning and the false assurance of eliminating poverty. Birth control propagandists, like Margaret Sanger, promised equality. It failed. Instead, the divide that King fought so passionately to mend became a chasm filled with communities ravaged by epidemic levels of abortion, rampant fatherlessness, births to unmarried women, exponentially high STD/HIV rates, and higher poverty rates.

I am grateful, beyond words, for King’s tireless efforts to elevate humanity. His ultimate sacrifice, his very life, reminds me that there are things worth dying for. I know our collective memories of America’s civil rights champions are sacrosanct. But extraordinary people like Martin Luther King Jr. are not omniscient. They were, and are, quite fallible. Little did Martin Luther King Jr. know that his words (or arguably Coretta Scott King’s) in 1966 immortalized in ink and praising Planned Parenthood, would literally turn blood red.

Planned Parenthood, the nation’s number one killer of African-Americans (more die by abortion than all other causes of death combined), boasts of King’s support at the 1966 inauguration of the Margaret Sanger Award. Abortion wasn’t legal then and married heterosexual couples adorned the covers of Planned Parenthood’s printed propaganda. In an advice column he wrote for Ebony magazine, from 1957-1958, King recognized the wrong of abortion in a response to a young man who compelled his girlfriend to the crime. He advised, in part: “One can never rectify a mistake until he admits that a mistake has been made.”

Taking cues from his own advice, supporting Planned Parenthood was King’s mistake. There are disturbing questions that have to be asked, such as “How much did MLK know about this eugenics-birthed organization?” Surely he knew that its founder, Margaret Sanger, prided herself in speaking before the KKK on behalf of her organization’s mission. He had to have known she proclaimed in her 1920 book, “Women and the New Race” (and throughout her whole life): “Birth control itself, often denounced as a violation of natural law, is nothing more or less than the facilitation of the process of weeding out the unfit, of preventing the birth of defectives or of those who will become defective.”

Did he know about the failed Negro Project where poorer blacks were targeted with birth control policies to “reduce or eliminate” their birth rates? He had to be aware that the president of Planned Parenthood, during the time he was given the award, was Alan Guttmacher, former Vice President of the irrefutably racist American Eugenics Society. Certainly he knew eugenicists were forcibly sterilizing women, disproportionately black, across the country, work involving many Planned Parenthood affiliates and physicians. Did he not know that all of the peaceful protests, sit-ins, and boycotts in the South were aimed at eugenics-based Jim Crow laws…the same warped pseudoscientific racism that birthed Planned Parenthood?

Or was he, like many others, too fixed on that glossy cover to turn the page and find out what was inside?

Sadly, his lack of awareness of Planned Parenthood spurred on an even more insidious injustice than that which he challenged with such spiritual fervor. We honor a great man while acknowledging he wasn’t always right. Abortion is now epidemic in the black community. In New York City, the abortion of black babies occurs at an alarming ratio that is 5 times higher than whites, and twice as high as Hispanics. For every 1,000 black babies born alive, there are 1,180 babies destroyed by abortion (as compared to 240 white babies per 1,000 born alive and 610 Hispanic babies aborted per 1,000 born alive). Nearly sixty percent of all viable black pregnancies in NYC, the home of Planned Parenthood, end in abortion. It is epidemic.

This isn’t the “dream” MLK spoke of, but a nightmare reality that feeds the abortion industry’s bottom line. Planned Parenthood commits heinous injustice every single day. When the nation’s largest abortion chain invokes King’s name, to justify the slaughter of over one million innocent lives each year, it mocks the sacrifice of one who fought, and died, for human dignity.

The arc of the moral universe may be long, and it may bend toward justice. But evil has a way of forcing detours that take humanity on a much longer course. In his 1967 speech

Planned Parenthood still enjoys abusing the legacy of Dr. King to advance its abortion empire, killing babies of every hue in the name of the god of abortion. They will twist any historical figure, any word, and any moment to protect the one thing they adore more than anything else—the blood money that has made them a billion-dollar Goliath.

But have no fear all you Davids out there. We know how that story ends.