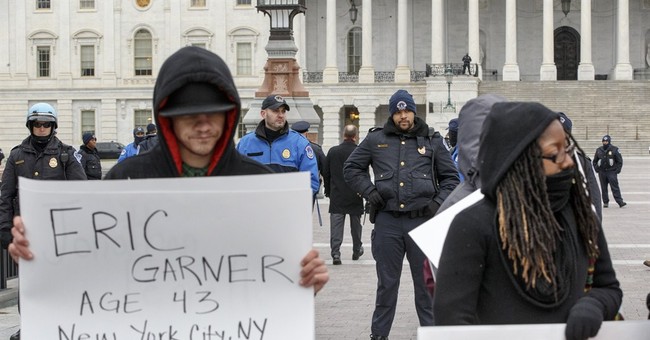 We live in a hashtag world. It’s much easier to deal with a few emotionally charged words than the fact that those words misrepresent reality.

#BlackLivesMatter. Well, it depends. This whole media-driven frenzy pretends that the annual deaths of 400 lives (of any race or ethnicity) at the hands of police is the civil rights injustice of our day. No one deserves to die, but some put themselves into situations where their own reckless decisions lead to untimely deaths (e.g. Michael Brown). And then, there are tragic cases like Eric Garner’s that deserve the reaction of disgust and indignation. How could there be no verdict against the officer who, basically, strangled the husband and father?

Liberal feminists, who never miss an opportunity to spread their pro-abortion religion, have injected their nonsense into issues of urban violence. “Freedom from violence is #reprojustice. #HandsUpDontShoot #BlackLivesMatter #Ferguson” tweets NARAL. Reproductive Justice (or #reprojustice), by the way, is the pathetic euphemism for abortion in the black community, where the abortion rate is 5 times higher than among whites. Abortion is the ultimate violence with brutality that is always hidden by a news media desperate to avoid the Emmett Till effect. Planned Parenthood, the leading killer of black lives that apparently don’t matter, had to show how much it “values” life by tweeting: “Today we reflect on #Ferguson, and the responsibility we all share to ensure safe communities for our youth and families. #BlackLivesMatter.”

Too bad they didn’t value the life of Tonya Reaves, a young black mother left to die by bleeding to death for 5.5 hours in one of their Chicago abortion mills (by a white abortionist, no less). The abortionist didn’t want to be bothered with calling 911. Tonya’s loss of life wasn’t an emergency; her life didn’t matter. In fact, this whole #BlackLivesMatter is quite male-centric. Liberal feminists hate “patriarchy” but apparently only get really upset when black males are killed. They’re not bothered at all by the black women who are killed in botched abortions, like 22 year old Lakisha Wilson, killed by a self-policing late-term abortionist. Qualecia James, a 7-month pregnant mother of a 4 year old, was gunned down. In numerous studies, including one from the CDC, “Homicide was found to be a leading cause of pregnancy-associated injury deaths among women…Risk factors included age younger than 20 years, Black race, and late or no prenatal care.”

No riots. No die-ins. No protests. Absolutely no mainstream media coverage. The lives of black women, snuffed out by real injustice and violence, have been completely ignored and treated with nothing but silence.

Until this week, sort of.

The NAACP Legal Defense Fund has tweeted about a list of 76 black individuals, from 1999 to the present, who have been shot by cops while unarmed. And the list actually includes a handful of females! Well, I don’t think it actually bolsters this increasingly reality-detached cause by including Miriam Carey on the list. She was the 34 year old black Connecticut woman who rammed a barricade at the White House gate area and then led police on a high-speed chase around the Capitol. She was “unarmed” with an Infiniti sedan as her weapon. Despite numerous attempts of Capitol Hill police, secret service and other authorities to stop her, she was killed by gunfire because of her actions. According to an FBI briefing, she “had postpartum depression, an injury to her head and a family history of schizophrenia.”

She put countless people in harm’s way and endangered the life of her 1 year old daughter, who was in the car with her. But, sure, let’s put her on a list declaring racial injustice and police brutality.

This list, by the way, amounts to 5 lost lives every year due to this “massive epidemic” of police brutality. Compare that to 363,705 black lives violently slaughtered, every year, in the name of “reproductive justice”. Abortion, not cop-caused deaths, is the number one killer of black lives.

Hands up! Don’t Shoot? Don’t worry. The millions who have been aborted won’t have to face that grossly over-exaggerated racial injustice of excessive police force. They’ve already faced the ultimate racial violence for being, as Obamacare architect Jonathan Gruber described them, “marginal children”.