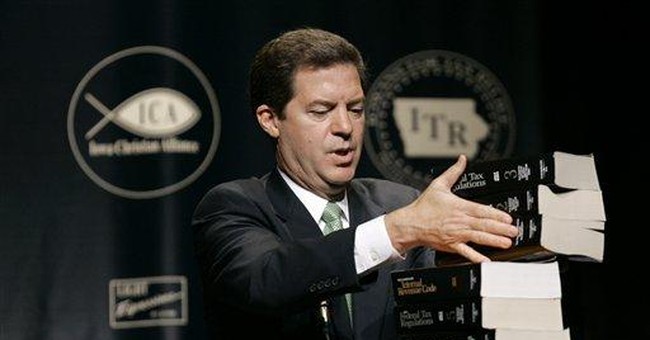 Approaching nearly 10 million words and stretching an interminable 67,000 pages, the American tax code exists today as complicated mess of pitfalls, pratfalls, and potholes – even though its central philosophy couldn’t be more straightforward: “If you want more of something, subsidize it. If you want less, tax it.”

But if that used to be a guiding principle in determining how to spend and collect the taxpayers’ money, it’s clear Democrats in Congress aren’t aware of the history. Because this past week, the majority leadership unveiled a budget plan for 2009 that raises taxes on everything from starting a family, to starting a family business. All to finance a reckless spending agenda that comes in a full $276 billion in excess of what the president has requested.

So it goes for an annual budget request that envisions the expiration and elimination of nearly every measure of pro-growth tax relief Republicans fought to pass through Congress. In its place, the bill lays a trap for the American taxpayer in the form of $683 billion in new taxes – far and away the single largest tax increase in the long and ignominious history of the code.

Of course, to achieve that level of prodigious spending, you need to do more than slash the child care tax credit in half (from $1,000 per child to $500) and resurrect the marriage tax penalty that Republicans once successfully slayed. You also need to punish low-income Americans by replacing the 10-percent tax bracket (the lowest percentage one can pay and still pay income taxes) with a new lowest rung of 15 percent; you need to dramatically increase the current 15 percent tax rate on capital gains; you need to punish small investors by raising the tax burden on dividends; you need to pave the way for the Death Tax to rise from the grave in 2011; and let’s not forget: you need to ensure that an estimated 116 million taxpayers pay an average $1,833 more to the federal government this year than they did the year before.

More than anything else, a budget request is a statement of national priorities; a clear enumeration of what our country needs to grow its economy and remain in the future the first-rate power it is today. In the case of the Democrats’ 2009 budget request, the statement of need could not have been articulated any clearer: We need more spending, historic new tax hikes, and greater control over the way American families live their lives.

But while the majority pulled no punches in sketching out a future in which a broader, more expansive government replaces the wisdom of markets and people with the judgment of bureaucrats and politicians, Democrats remained eerily silent – conspicuously so – on what to do about our nation’s looming entitlement crisis. You see, as Yogi Berra might say, our population is getting older by the day. And it won’t be long until the number of Americans drawing funds from accounts like Social Security and Medicare first catches up to – and then far outstrips – the resources on hand to accommodate them.

The unfunded liabilities that currently wrack the Medicare and Social Security systems are scheduled to swell from $38.7 trillion today to $52.5 trillion in just five short years. But at a time and place when bold steps are needed to stem the tide of future entitlement growth and pull these programs back from the precipice of future insolvency, Democrats instead chose to whistle past the graveyard by producing a budget document that refuses to acknowledge there’s even a problem.

Though not putting forth a serious plan to address entitlement spending, Democrats had no trouble putting forth a plan to oversee the spending of more than $3 trillion of your money in the next year alone. Unfortunately, to finance that spending, they’ll have to find a creditor willing to fork over the more than $600 billion in revenue we don’t currently have – the single largest increase in the debt in our nation’s history.

When it comes to being a responsible steward of the economy, Congress needs to either lead by promoting a pro-growth economic agenda – or, better yet, get the heck out of the way. Unfortunately, this latest budget request makes plain that this majority is incapable of doing either.