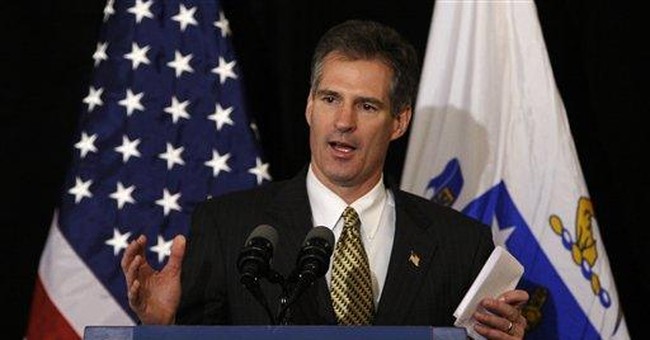 Who could have imagined a month ago, when polls had Martha Coakley leading Scott Brown by more than 20 points, that a massive earthquake was in store not only in Haiti -- but also in Massachusetts?

Haiti's was a staggering blow to a country that has suffered vastly too much. Tuesday's Massachusetts quake caused no loss of life but it devastated the nation's ideological landscape.

One of just five Republicans in a 39-member state senate, Brown and his Republican colleagues could caucus in an elevator. Massachusetts voters break down as 51 percent independent, 37 percent Democrat, and a paltry 11 percent Republican. The state has not elected a Republican to the Senate for 31 years, nor a Republican to the House for 16. Fourteen months ago, Barack Obama carried the state by 26 points.

Now this -- a five-point Brown victory.

Bill Clinton campaigned for Coakley. So did Congress' full leftist monty -- with New York's Democratic Senator Charles Schumer dismissing Brown as a "far-right teabagger." Obama swooped in on Air Force One. He also inked a sweetheart health-care deal with the AFL-CIO, wherein the nation's 12 million unionists get a five-year bye on new taxes on expensive ("Cadillac") health insurance plans. The deal came just in time for the unions to flood Massachusetts with their phone-banks and swarms of organizers to save the Senate Democrats' 60-vote super-majority and, of course, ObamaCare.

The Democrats did a number of idiot things. Coakley said, "We need to get taxes up," favored a "war tax," backed repeal of the Bush tax cuts, signified for civil rights for terrorists, and in a state 50 percent Catholic said -- incredibly -- that because of the church's position on abortion, "Catholics probably shouldn't work in emergency rooms." She routinely linked Brown to -- of course -- "the failed policies of George W. Bush and Dick Cheney" and termed Brown an "enemy of rape victims."

But more than that, it was (1) health care -- with pre-election polls finding Massachusetts voters opposing Obama's and Pelosi's new health-care entitlement plan 48-40. (The same polls had only 30 percent giving a favorable rating to the Democratic Congress, and 55 percent rating it negatively.) ObamaCare has become a stew of payoffs and secret deals (e.g., the "Louisiana Purchase" of Sen. Mary Landrieu and the "Cornhusker Kickback" for Nebraska Senator Ben Nelson).

And yes, ObamaCare now may be dead. We have it on the word of Massachusetts' distinguished Congressman Barney Frank: "If Scott Brown wins," he said, "it'll kill the bill." It should.

(2) STILL more, and more broadly, voters in the bluest of blue states (in 1972, George McGovern carried only Massachusetts and D.C.) revolted against too much federal spending, soaring debt and deficits, inflation and taxes to come, augmented federal power, the looming catastrophe of cap-and-trade, and -- yes -- socialized medicine. Residents of the state with the nation's highest health-insurance premiums, they have experienced the absurdity of government-mandated insurance driving down costs while driving up efficiency of delivery and quality of care.

Finally (3), voters in Massachusetts, more liberal perhaps than voters in any other state, said they've had enough of the same ol' Washington same ol'. Obama took office a year ago promising transparency, a post-partisan presidency, history's most open administration. He pledged to put the final negotiations regarding ObamaCare on C-SPAN.

Yet things didn't work out that way. We were introduced to a Chicago-ized national politics. Notably on his signature legislative initiative, with public support for it collapsing, he has sought to muscle it through. Secrecy, arm-twisting, and back-room deals have been the norm. His message to the people has been -- as it is even now: We are going to give the people government-mandated health care, and never mind what the people think. And so the divide, the disconnect, so eloquently described Tuesday in Massachusetts, between the people and an administration -- and a national Democratic party -- out of touch.

HOW DOES one know he is living in an hour of break-up -- at the end of an era?

Maybe when the election of one Republican -- Scott Brown -- may mean the death of ObamaCare and cap-and-trade, and the unraveling of the entire wack-leftist agenda.

Perhaps when, in fact, some Democrats (for instance, Senators Lincoln, Landrieu, Nelson, Lieberman, Bayh, Warner, and Webb) may privately hunger for the election of a Scott Brown -- thereby lifting from their shoulders the burden of defending past votes for the Obama/Pelosi monstrosity.

How can the Republicans really expect to defeat Barack Obama in 2012? These days, it's a foregone conclusion that a president will serve two terms. Even W did that. And then in 2016, there will be Hillary. How can the Republicans even think of beating someone with no one? Who could they possibly run in 2012? Governors Tim Pawlenty or Bobby Jindal? A reworked former governor (of Massachusetts) Mitt Romney? Former governors Mike Huckabee or Sarah Palin? Come on.

Hey, here are two new possibilities: Bob McDonnell, Virginia's just-installed governor who won a starkly lopsided victory (his predecessor, lest we forget, is Obama's handpicked national Democratic chairman who couldn't deliver for his party his own state). Or, a name hardly heard until the Massachusetts earthquake -- pickup-driving Scott Brown.