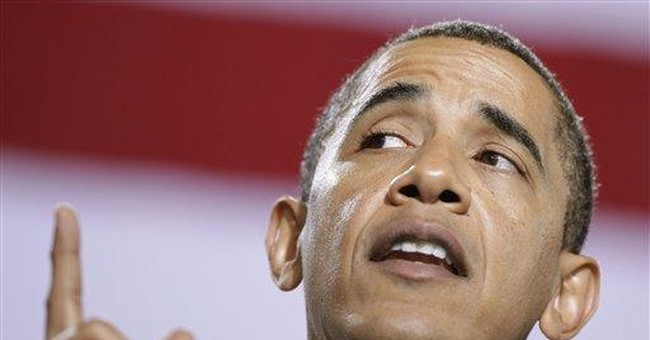 Ever wish you could sit down and talk to President Obama? Such a conversation might go this way....

Sir - if I may - you're at risk of losing the narrative on health care, and your reform program with it.

Good to see you back for another chat. I wish the town hall discussions were as civil as ours have been. The vicious hostility voiced at some of them recalls for me nothing so much as the hokeyed-up anger at the "tea parties" last spring.

Sir, I'm here to help you. Even in the most transparent administration in history, your ObamaCare may be headed the way of HillaryCare.

A coupla things. First, it's no longer health care reform - it's health insurance reform. My people in my weekly Wednesday night polling meetings tell me precise terminology is crucial. In this, everybody except government is dishonest. The No. 1 enemies are doctors, the insurance industry, and the pharmaceuticals - Big Pharma. Combined, they're ripping off the public. Second, I've got this one under control. I don't need your help - and I'm not sure I want it.

Isn't that part of the point, Mr. President - that on health care or whatever you want to rename it, a major cohort of the public doesn't feel the need for federal help? Combine that cohort with those on Medicare who will see cuts in their care options (as you have said), plus those confused and anxious about what the final plan will mean for them, plus those rattled by horror stories about rationed care and dismal service and diminished quality and too many people dying on waiting lists under the British and Canadian plans so often cited favorably by you and your team - and you've got two things.

A lot of unhappy people - also known as voters - and a closing window for ObamaCare.

Look. These town halls often are mobs of the misinformed fed "disinformation," as my communications officer for health care, Linda Douglass, so aptly put it for CNN. The Senate Majority Leader, the distinguished Harry Reid, was right when he said the attendees are "taking their cues from talk show hosts, Internet rumor-mongers...and insurance rackets." They're stirred up by far-right zealots and Republican scare-tactic organizing - by the same sort of people who define the proactive reform we have in mind for the nation's health insurance system as "socialized medicine." And by people like Sarah Palin. Can you imagine - "death panels"? On what planet did she dream up that one?

Right here on Earth, sir. You yourself have talked of the possibility of panels of government bureaucrats and medical experts making judgments as to who gets what care and coverage based on his or her usefulness to society - the way comparable boards do in Canada and Britain.

Canadian Supreme Court Justice Marie Deschamps said in a 2005 majority ruling: "The evidence in this case shows that delays in the public health care system are widespread, and that, in some cases, patients die as a result of waiting lines for public health care." Decent Americans worry about ObamaCare producing similar outcomes in America.

But that's an isolated example. I won't let it happen here.

Sir, one of your health care advisers - Dr. Ezekiel Emanuel, brother of your Chief of Staff, Rahm - is big into end-of-life solutions. He has written: "When the worse-off can benefit only slightly while better-off people could benefit greatly, allocating to the better-off is often justifiable."

Zeke wrote that? It sounds like a Sarah Palin primal scream. (No, wait. Didn't Howard Dean originate the primal scream, my own party's distinguished former chairman?) I'll have to counsel with Zeke. Remarks like his are messing me up.

Sir, again - if I may. Messing up the prospects for ObamaCare are a lack of transparency about what it would mean for middle Americans, combined with your over-reaching in both policy and rhetoric - notably regarding everyday Americans who are deeply concerned and, in the grand American tradition, say so forcefully, vigorously, bluntly. Remember, the American people are not a fringe group. You treat them as such at your peril.

I am calling on all Americans to sacrifice.

They're already OD'd on sacrifice: recession, stimulus, deficits, lost jobs and lost equity, higher taxes, cap-and-trade that will drive up energy prices across the board. And now you're telling them to accept a $1 trillion (for openers) health insurance reform that you'll finance through cost-cutting and Medicare reductions?

But it's all for their own benefit. If we don't adopt some form of ObamaCare, everyone will suffer.

Sir, you and your heavies are not advancing your cause by calling people at town halls nut cases and AstroTurf. Rhetorical thuggery only adds to the perception that the wheels are coming off ObamaCare.

As I said, I won't let that happen. I'm taking to heart the advice of Newsweek's Eleanor Clift, who wrote last week: "Unless Obama and his surrogates find the language to reassure the majority of Americans with health insurance that they will be better off under his reform plan, the AstroTurf opposition we see playing out on our TV screens could morph into the real thing." I'll educate them. I'll reassure them. And they'll get over it.

Maybe. And maybe your rhetorical overkill will have the same consequence as the Japanese attack at Pearl Harbor. "I am afraid," said Japan's Admiral Yamamoto, "we have awakened a sleeping giant."