Sarah Palin: As Intelligent as a Bag of Hammers? 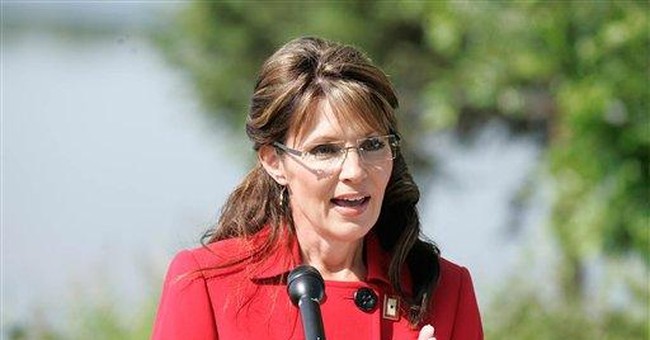 Does it make any sense, what Sarah Palin has done?

Little that is happening these days seems to make much sense, particularly regarding the Republicans.

But I mean, just up and resigning as governor of Alaska? All the experts say it's the wrong thing to do. That it sends the wrong message - giving up on the only statewide elected post she's ever held. That it confirms she really is the ditz they have suggested since John McCain vaulted her to fame.

A couple of points. First, the political landscape stands dramatically changed from just a year ago - and the media landscape along with it. So, second, it's a landscape regarding which there are no experts. So, third, who's to say Sarah Palin is any more ditzy than the self-styled experts?

Then why would she quit before fulfilling her contract to precisely the Alaskans she says she is quitting to serve better?

Three possibilities. 1) She is a true outsider, as opposed to the ersatz ones most politicians claim to be. 2) She views the unconscionable assaults on her and her family as greatly damaging and beyond the pale, and has concluded her time in politics is up - that, for her, the political game is over. 3) She worries deeply about the future of the country, views the Republican Party as in collapse (Mark Sanford flaming out with an Argentine bar dancer), and - on this new political landscape - sees herself as a possible flag around which Republicans, conservatives and moderates can rally.

Well, what Mark Sanford did with Maria Belen Chapur wasn't so bad as lying about it. And sex hasn't proven fatal to a lot of pols - from Thomas Jefferson to John Kennedy to Bill Clinton. It didn't spell the end for Rudy Giuliani or Newt Gingrich either.

But it did finish off Gary Hart, who in 1987 dared the press to track him, which it did - all the way to the yacht Monkey Business and the spicy blonde Donna Rice. And it finished Eliot Spitzer and too many forgotten pols to count.

So Sanford should have resigned, and Sarah Palin shouldn't have?

About Sanford, probably. About Palin, hard to say. Still, it's difficult to escape the conclusion that many of the comments about her resignation from those who fear her or wish her ill betray a sexism infusing the left. It's a leftist axiom that good-looking conservative women have the intelligence of a bag of hammers. Of course, a corollary holds that the uniformly left-leaning damsels of Hollywood were born uniformly brilliant - theirs being the brilliance of ideological congeniality.

I don't see what all that has to do with Sarah Palin's resignation as governor of Alaska, and the Republicans, and what you call this new political landscape.

Retrospectively, the Obama election may have been truly revolutionary in many ways - more so than the election of Ronald Reagan. Demographics are running strongly in the liberals' and Democrats' favor. The Obama White House insists on overseeing next year's Census, with agents from ACORN, thereby to redraw the political map even more lopsidedly in favor of the left.

With the Republican Party increasingly leaderless and seemingly on a descent into the maelstrom, the conservative/moderate remnant may require a galvanic force. A leader. An opposition on the British model, the sort of opposition rarely seen in America - if ever.

Sarah Palin may see them as failing or flawed. And with the ethics process in Alaska having been turned against her for partisan/ideological purposes, and proving crippling financially, and a disabling distraction, she may have decided that if she is even to try to serve as a catalytic agent for conservatives and moderates nationwide, she has to devote her energies to that task full-time.

It won't be easy. And does she have the gravitas, the intellectual heft?

They - the nameless "they" who rule the world - said Ronald Reagan was just a B movie actor lacking gravitas and heft, too. What's more, it's a new landscape and a game perhaps never played before. And heaven knows, conservatives and moderates - the Republican remnant - need someone. Someone to start saying....

That government under the Obama administration is the nation's primary growth industry. That the more power government accrues, the more government fails. That deficits and taxes destroy productivity and innovation. That energy independence - including nuclear power - is as important for the United States as it is (as Obama notes repeatedly) for Iran. That one of the two most important things a government must do is stabilize the currency.

That socialized medicine and cap-and-trade are the wrong ways to go. That having Hawaii or Alaska or Des Moines targeted by North Korean nuclear missiles is unacceptable. That joining the Fidelista-Chavista chorus regarding Honduras is idiocy. That Islamo-jihadists still are warring against us - and the other crucial thing the government must do is defend the citizenry.

So is Sarah the one to say such things?

We may be about to find out.