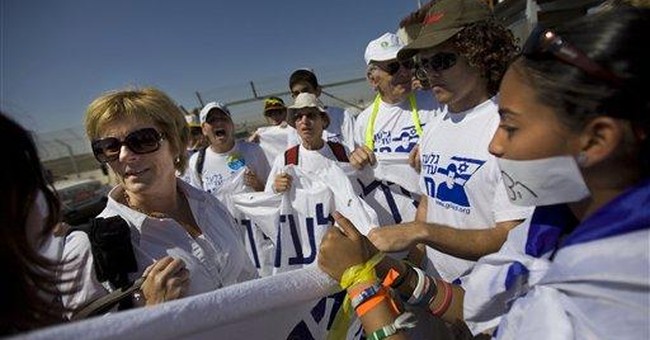 Brief comments on a variety of topics currently in the news....

With the Obama administration springing Guantanamo-housed terrorists and e.g. funding Hamas-dominated Gaza to the tune of $900 million (etc.), how far we have come from George Bush's admonition: "Either you are with us or you are with the terrorists."

Bankrupt California has gone hat-in-hand to the White House, where the president said in effect, Not today, buddy, but maybe tomorrow -- and averted his eyes. 'Sfunny. What's good for the nation's gargantuan banks is not good enough for a (now) decidedly Democratic gargantuan state? Has Obama consulted his economic advisers? They might tell him that with the world's eighth-largest economy, and a state boasting more population than any other, California is too big to fail. As was, for instance, General Motors.

Is the stock market these days a bull or a bear? A Wall Street Journal news story tries to help: "Historical data and the still struggling economy seem to point to...a cyclical bull market in a secular bear market." All clear?

If you listen to the Obama media, the president has seduced Israel's new, second-time-around prime minister, Benjamin Netanyahu, into accepting a Palestinian state. Maybe. A tough hombre, Netanyahu now supports a two-state plan -- with conditions: The new country (1) would have to recognize Israel as "the nation state of the Jewish people." Further (2) the Palestinian state would possess no military and (3) Israel would control its air space. (4) Israel would accept no Palestinian "refugees," (5) Israelis would maintain the right to settle in the West Bank, and (6) Jerusalem would remain undivided and under Israeli control.

Palestinians told Netanyahu to take his two-state overture and stuff it. Said Khaled Meshal last month, chief dialectician of the Hamas terrorists crushing Gaza: "There is only one enemy in the region, and that is Israel."

Ponder this one. Self-styled "moderates" often say that rather than departing what they deem a wayward organization in a huff, it is better to remain in the group and help reform it from within. Yet (a) many have left a Republican Party they deem usurped by social conservatives and the religious right. And (b) many have left, for greener ecclesiastical pastures or lush fairways, mainline Protestant churches no longer satisfying their religious, emotional, or intellectual needs. It's all enough to make one wonder, regarding supposedly stay-the-course moderates: Who's in a huff?

Appellate Judge Sonia Sotomayor, nominated for a seat on the Supreme Court, is defending her membership in a women-only club -- the Belizean Grove. This despite prohibitions against federal judges joining groups discriminating on the basis of gender. Judge Sotomayor says that though her club denies membership to men, it allows men at some of its events. There was a time -- long ago and far away -- when men nominated for higher judgeships were ripped as perverse Neanderthals for their memberships in all-male clubs. But in this New Age of double standards, the "wise Latina" (Judge Sotomayor's words) has a more mature view.

President Obama said that without adoption of his economic "stimulus" bill, unemployment would reach 9 percent -- and never mind that most of the stimulus won't kick in until 2011. Congress dutifully passed the measure, and unemployment has reached 9.4 percent. Could that be why Obama is pressing his Cabinet secretaries to accelerate their stimulus spending?

Forbes reports on tracking by Eric Singer, a fund manager who compares stock performance when Congress is in session with performance when Congress is adjourned or in recess. According to Singer's data, in the 44 years ended December 31, the S&P 500 was up an average annual .3 percent on the 7,244 days Congress was in session -- and up a stunning 16.1 percent on the 3,821 days it was not. Give Singer a cigar, and send those congressional swells on permanent vacations.

Oh, and Gitmo? Obama evidently has succumbed to an onslaught by Senate NIMBYs -- Not in My Back Yarders -- who insist terrorists housed at Guantanamo are as radioactive as the nuclear waste rejected for Yucca Mountain in Nevada. The Senators insist Gitmo's 240 jihadists are unwelcome in their state penitentiaries. Having enlisted no cooperating states, Obama is shopping the terrorists to cooperating countries. In this hour of euphemization, what Obamaphiles during the grim Bush II years termed "rendition" of terrorists in foreign prisons -- they now call "repatriation."

If Obama lands any of Gitmo's jihadists in Kuwait (liberated by the U.S. in the first Gulf War), they might tap to the delightful beat of Kuwaiti dissident Abdullah al-Nafisi. Recently on a recruiting tour, Nafisi brought supporters up to speed on al-Qaeda's efforts to breach the U.S.-Mexico border -- with:

"Four pounds of anthrax -- in a suitcase this big -- carried by a fighter through tunnels from Mexico into the U.S., are guaranteed to kill 330,000 Americans within a single hour if it is properly spread in population centers there. What a horrifying idea. 9/11 will be small change in comparison. Am I right? There is no need for airplanes, conspiracies, timings, and so on. One person, with the courage to carry 4 pounds of anthrax, will go to the White House lawn and will spread this 'confetti' all over them, and then we'll do these cries of joy. It will turn into a real celebration."