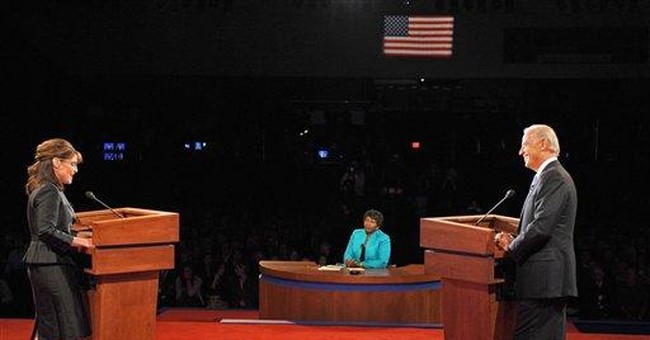 What'd you think about the debate?

Actually, that one and Palin-Biden. Both.

Let's start with Palin-Biden. She had him for lunch - blew him away. It wasn't even close.

But he was so smooth, uptown, on top of his facts. She was so - you know - provincial, down-home, just-folks.

Exactly - you make my point. Despite the press fencing him as a "lunch-bucket Democrat," he came across less as "smooth" than as too slick by half. Yet again he fuzzed his bio facts, saying he had been shot at in Baghdad - as Hillary did when she claimed she and Chelsea had been targets on the tarmac in Tuzla. He also said FDR went on television during the Depression - an impossibility, of course, because television was still being invented.

He waxed leftie-extreme by terming Dick Cheney "the most dangerous (vice-president) we've had in history." He said, incredibly, John McCain "is not a maverick" - seeking to cast him as Tweedledum to George Bush's Tweedledee. He boasted he was the first - in the Robert Bork hearings, then in the Clarence Thomas hearings - to elevate ideology over intellect, temperament, accomplishment, and character in weighing nominees for the Supreme Court.

Whoa. The vice-presidential debate was supposed to be all about Palin - did she have the moxie, could she hack it in prime-time?

That was the double-standard line from the pro-Obama/Biden media, but it turned out not to be true. The debate proved to be about both of them. She's the one who resonated, related. She was feisty and focused, informal and upbeat, electric even, congenitally optimistic, and winningly winsome. On the issues she knew her stuff. Rhetorically, she was direct - and proved unafraid, for instance, to say (a la Ronald Reagan), "Joe, there you go again," or to nail the Obama-Biden ticket for wanting, in Iraq, to "wave the white flag of surrender."

So what explains the smug, supercilious condescension toward Sarah Palin - your supposed "Killa from Wasilla"?

It emanates principally from phonies, the press, and the left. They can't stand her because she so demonstrably connects, is obviously bright and capable, yet fails to meet their twisted definition of what an achieving "feminist" should be.

Can we move on to the second presidential debate?

It wasn't up to the first one, which McCain clearly won. This was a closer call. Still, despite their hype presidential debates rarely change campaign dynamics, and this one didn't either.

Obama certainly held his own.

Oh yes - and that's all he had to do. Mr. Smoothie, Mr. Oleaginous, Mr. Cool. The razzle-dazzle guy right out of "Chicago" with his promises of anything and everything. The well-tailored callow fellow with practically no experience in areas that matter but with a very slick pitch. And certainly not in a league with the wizened, wise, and well sea-legged McCain. Obama is all high-sounding leftist theory. McCain has the tempered insight that only experience can instill.

Surprisingly, McCain had the better of Obama on the tailspinning financial markets. They and the economy generally are areas that rhetorically favor Obama, who relates oh-so-earnestly with testimonies about how capitalism has failed you and government is going to protect you, and do more for you, and regulate more on your behalf, and (for you) make federalized health care a constitutional right.

It's intellectual bilge water - consistent with leftist ideology though it may be. And in the current climate it flies very well, because people are hurting and worried. In such a climate, talk about personal responsibility and increasing governmental oversight (albeit by many of the same types of individuals who helped produce this mayhem) doesn't get you very far. So though McCain was - and is - largely right on economics and finance, and Obama wrong, it likely will win McCain very few votes.

And on foreign affairs, McCain played his usual strong hand - in response to which Obama did his usual rope-a-dope.

So are you saying it's over?

Not yet, but soon it may be - if the markets don't stabilize and if McCain can't pull some sort of rabbit out of the hat in the final debate next Wednesday. Politically, it's a scary prospect - with McCain-Palin, clearly the superior team of right reason and common sense, facing very long odds.

Yes. Think about it. The Nos. 1 and 3 liberals in the Senate (Obama and Biden) becoming president and vice-president. And Nancy Pelosi and Harry Reid, who have reduced Congress' favorable rating to just 9 percent, standing Nos. 2 and 3 in presidential succession. Whacked-out lefties running both the executive and legislative branches of government, and packing the third branch - the federal judiciary - with their ideological own.

Compare that nightmarish prospect with the tough-minded, conservative, experience-based optimism of honest John McCain and Sarah Palin - and the outcome should be a no-brainer.