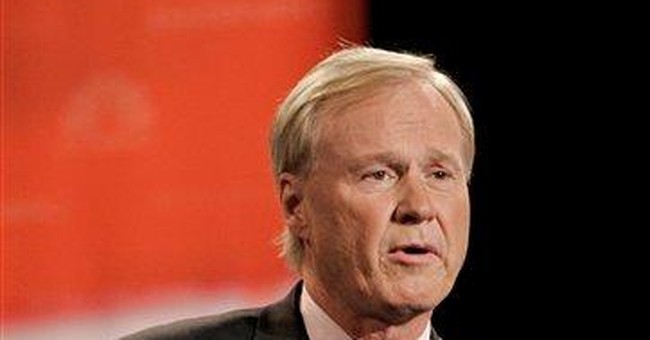 Before January ends, herewith a collection of quotations from TV types last year showing the stupidity and shameless leftism of major names in television “news.” The quotations were gathered by the estimable Media Research Center and voted by a jury to be among the most egregious of 2007. I have served on that jury in the past. For idiocy and ideology, these rank among the worst I have seen.

MSNBC’s Chris Matthews, Feb. 28: “When I watched (former President Bill Clinton) at Mrs. King’s funeral, I just have never seen anything like it. . . . There are times when he sounds like Jesus in the temple. I mean, amazing ability to transcend ethnicity — race, we call it, it’s really ethnicity — in this country and, and speak to us all in this amazingly primordial way.”

HBO’s Bill Maher, Feb. 20: “Joe Scarborough did a whole week of panel discussions on whether (President Bush) was an idiot. . . . People who were defending him were saying, ‘Well, he’s just inarticulate.’ But inarticulate doesn’t explain foreign policy. I mean, it’s not that complicated. The man is a rube. He is a dolt. He is a yokel on the world stage. He is a Gilligan who cannot find his (rear end) with two hands. He is a vain half-wit who interrupts one incoherent sentence with another incoherent sentence. And I hope I’m not piling on.”

MSNBC’s Keith Olbermann, on commuting Lewis Libby’s prison sentence, July 2: “Good evening. A president who lied us into a war and, in so doing, needlessly killed 3,584 of our family and friends and neighbors, a president whose administration initially tried to destroy the first man to nail that lie, a president whose henchmen then ruined the career of the intelligence asset that was his wife when intelligence assets were never more essential to the viability of the republic — a president like that has tonight freed from the prospect of prison the only man ever to come to trial for one of the component felonies in what may be the greatest crime of this young century.”

HBO’s Maher, on a failed attempt in Afghanistan to kill Vice President Dick Cheney, March 2: “I’m just saying if he did die, other people, more people, would live. That’s a fact.”

The McLaughlin Group’s Eleanor Clift (of Newsweek), discussing the Minneapolis bridge collapse, Aug, 25: “It takes leadership. After World War II, we maintained the infrastructure we had and we built an incredible network of highways, and leaders in both parties agreed that these were priorities. Now we have this tax-averse society, rallied by the Republicans — tax-averse, where everything becomes sort of a right-wing, libertarian refusal to let government spend any money or raise any money.”

NBC’s Matt Lauer, interviewing Al Gore, Dec. 6, 2006: “From your point of view, if you were to run for president you could take this (global warming) issue to the next level, even during just a campaign. And if you were fortunate enough to win the presidency, you’d sit in the most powerful office in the free world with a real chance to . . . save the planet, without putting too much emphasis on it. Wouldn’t that be enough of a reason to run for president for you? . . . As someone who feels as passionately about the subject as you do, and your documentary is evidence of that, why pass up the opportunity to have that world stage again?”

CBS’ Katie Couric, writing about the Oscars in her “Couric & Co.” blog, Feb. 26: “As the throngs of celebrities greeted Al Gore as a secular saint, I wondered if this might usher in a backlash against environmentalists. . . . My fervent hope is that Hollywood’s embrace of Al Gore doesn’t give people an excuse to condemn and mock the effort — and oppose taking steps that we as a society need to take to deal with the issue of climate change.”

PBS’ Bill Moyers, in a Jan. 12 speech on reform of the media, aired Jan. 16 on the Pacifica Network’s “Democracy Now”: “As we saw in the run-up to the invasion of Iraq, the plantation mentality that governs Washington turned the press corps into sitting ducks for the war party, for government and neoconservative propaganda and manipulation. . . . I can’t tell you again how many reporters have told me that it just never occurred to them that high officials would manipulate intelligence in order to go to war. Hello?”

ABC’s Barbara Walters, recounting her interview with Venezuela’s Hugo Chavez, March 16: “He was not what I expected. He was very dignified. He was warm, friendly. He likes the U.S. It’s George Bush that he doesn’t like. He also was very personal. He talked about how hard life was, that he wished he could be in love but you can’t be when you’re heading a country.”