Congress Votes for More War in the Middle East 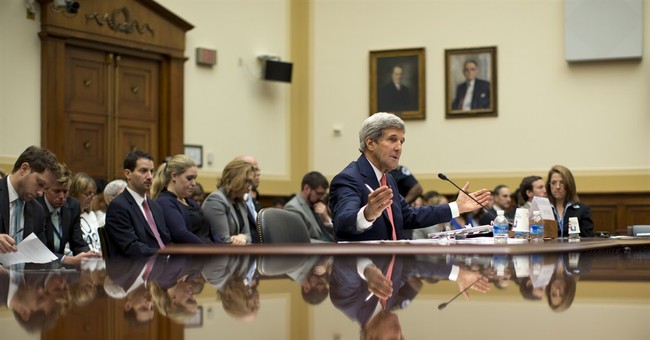 Last week, the House and Senate voted to rubber stamp President Obama's war plans for the Middle East. Both bodies, on a bipartisan basis, authorized the US to begin openly training and arming the rebels who have been fighting for three years to overthrow the Assad government in Syria.

Although the Syrian government has also been fighting ISIS and related extremist groups for three years, the US refuses to speak to the Syrians and has warned Assad not to interfere with the coming US attack on sovereign Syrian territory

President Obama promised that airstrikes alone would "degrade and destroy" ISIS, telling the US military in a speech last week that:

"The American forces that have been deployed to Iraq do not and will not have a combat mission... I will not commit you and the rest of our armed forces to fighting another ground war in Iraq."

But of course any US troops sent into a war zone are "combat" troops. And more are on their way.

While the president was swearing that there would be no boots on the ground, Chairman of the Joint Chiefs of Staff, General Martin Dempsey, was in open disagreement. General Dempsey told the Senate Armed Services Committee last week that US forces would need to embed with Iraqi or Kurdish troops in combat situations under certain circumstances.

The limited mission the president promised just weeks ago has already greatly escalated, and now threatens to become another major regional war. In reality, however, this is just a continuation of the 24 year US war on Iraq that President George Bush began in 1990 and candidate Obama promised to end as President.

Under last week's authorization bill, the president would have authority to train 5,000 fighters in Saudi Arabia for insertion into the civil war in Syria. This is in effect a re-arrangement of the deck chairs. To this point the training was carried out by the CIA in Jordan and Turkey. Now, the program will be moved to the Pentagon and to Saudi Arabia.

The CIA training of the rebels thus far has resulted in a direct pipeline of weapons from "vetted moderates" to the al-Qaeda affiliated al-Nusra Front and to the very ISIS that the administration claims to be fighting. In July, a full brigade of 1,000 fighters from a US-backed rebel group joined ISIS! Of course they took their US-provided weapons and training with them, some of which will certainly be used against the rapidly increasing US military personnel in the region.

That Saudi Arabia is considered a suitable place to train Syria's future leaders must be some kind of sick joke. While ISIS was beheading two American journalists - as horrific as that is - the repressive Saudi theocracy was beheading dozens of its own citizens, often for relatively minor or religious crimes.

There are 200 million people bordering the countries where ISIS is currently operating. They are the ones facing the threat of ISIS activity and expansion. Let them fight their own war, rather than turning the US military into the mercenary army of wealthy Gulf states. Remember, they come over here because we are over there. So let's not be over there any longer.