What is a Trillion Dollars? 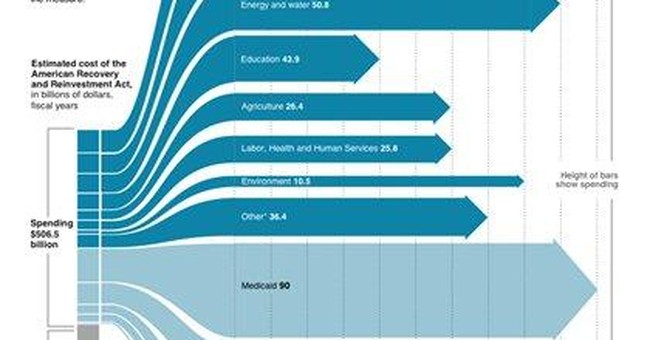 There is so much talk about trillions of dollars that I thought it was only fair that those who are destined to pay all of this money back should understand what it is. A trillion is 1,000 billion. That was easy! Of course a billion is 1,000 million, for those of you who didn't know. But what does it all mean? Have you ever thought about owning a house worth $500,000 or a half - million dollars? It means the following: Using the formula we have in front of, us a billion dollars would be 2,000 half- million dollar houses; A trillion would be 2,000,000, half- million dollar houses. When you realize there are probably 100 million houses in this country, that represents only 2% of the market. Doesn't sound that bad!

Here is the best use for this knowledge. General Motors said they need $2 billion to last another month or else they would have to go bankrupt. Now you know what they really want is 4,000 half-million dollar houses. So maybe we give them Fresno, California.

Now, every time a politician mentions a trillion dollars, you just need to think about 2% of the houses in this country. If every state were equal it would be all of the houses in two states, which wouldn't be that bad if you were thinking Rhode Island and Delaware. If, however, you decided to go with Texas and California, it would seem a whole lot worse.

We forgot one small item: we don't have the money. So we need to borrow it and pay interest on the money we borrowed. Let's use 3.5%, approximately the yield on a 30 year treasury bond. I believe that’s only $35 billion a year! That's 70,000 $500,000 houses. Now we are starting to talk substantial monies. We might have to fork over St.Paul, Minn. or maybe Oklahoma City. And that would be every year! We could start running out of houses, or cities, or both.

Up to this point I have been mixing money and real estate which could be confusing , but now I have a real example. The President talked about helping around 9,000 homeowners escape foreclosure and giving many more people help with their mortgage payments. The cost: a smallish $75 billion. Now we can see apples versus apples because we know that this would equal 150,000, half-million dollar houses. I don't know about you but it seems out of line to me. I wouldn't think it would come close to costing $500,000 a homeowner to fix their problem and this is over 15 times as much. Where is the money going? This can't be another TARP venture, could it?

I personally believe humor can make the more mundane things in life a little more interesting and certainly there is nothing more mundane than the government giving away our future. What I am trying to point out is that we need a better measuring stick to understand the calamity that has been foisted upon the citizens of this great nation. The human mind, unless honed to a fine point, cannot deal with things that you can't imagine such as a trillion anything. Did you ever stop to think that maybe the politicians only wanted monies in the hundreds of billion dollar range but felt we could possibly understand those numbers? Therefore they added the appropriate amount of zeros until we all unilaterally threw up our hands and proclaimed "whatever'!

We, as a nation, have to get a grip while we still have something to grip. I have lamented over the fact that the largest of all the bills was passed without anyone reading it. Now I point out that they really didn't have to rush because it was incomprehensible anyway. On the other hand if you take small pieces of the bill, as the high speed train to Las Vegas for $8 billion, or as I named it the "Las Vegas Casino Recovery Act,” and realize it is 16,000 of those expensive houses, you begin to wonder. If each house had 4 people who resided there it would mean 64,000 people trying to get on the train. How easy is it to realize it doesn't work? At best only 1,000 people could ride at one time so they would have to make 64 trips a day. That would be one train leaving every 22 minutes. Realisticly you can only run 3 trains a day which would carry 3,000 people, which would mean you would only need 750 houses.