Hillary Clinton Gets an Offer She Can’t Refuse 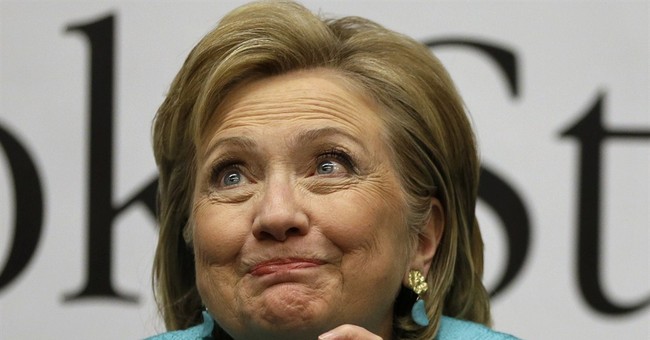 Hillary Clinton is in trouble.

Her problems do not emanate from her legion of critics on the Right. Instead, because she has not spoken with politically correct precision, her traditional allies on the Left are a bit shaken.

Mrs. Clinton said in an interview yesterday that “for me, marriage had always been a matter left to the states. And in many of the conversations that I and my colleagues and supporters had, I fully endorse the efforts by activists who work state by state, and in fact that is what is working."

Those advocating for a Supreme Court ruling deeming same-sex marriages a constitutional right were dismayed. Here are some quotes from The Huffington Post on Mrs. Clinton’s perceived faux pas.

“‘I know her heart, but it is terrible framing,’ said Hilary Rosen, a longtime gay rights advocate and ally of the Clintons. ‘Since this is going to the Supreme Court potentially on that question, I was surprised at her ‘old school’ framing of that. Since she has ‘evolved,’ why not just get rid of that old red herring, too?’”

“Advocates have always thought that the issue would be settled by the Supreme Court,” said Fred Sainz of the Human Rights Campaign. “We’re looking for a 50-state solution and it’s not acceptable for any state to be left out.”

“Some of her answers were not artful and not clear,” said Freedom to Marry chief Evan Wolfson. He continued, “I hope there will be other opportunities where she would be clear that the Constitution guarantees the freedom to marry.”

Can anyone else hear the strains of the theme to “The Godfather” begin to play? Wolfson has made Hillary an offer she can’t refuse: Say what we want and use the phrasing we prefer or some of your biggest financial backers – gay rights advocates – will have second thoughts.

Poor Mrs. Clinton. As she has launched her new memoirs, some of her “artless” comments have made more than a few bad headlines. “Hillary Clinton had a bad week until it turned awful,” writes Jennifer Rubin of the Washington Post. “Hillary Clinton’s bad week continues,” according to commentator Pejman Yousefzadeh. And even the normally friendly Economist magazine says “Her stodgy memoir is best understood as a briefing book for surrogates and ‘influencers’ … The memoir has the cautious, polished, poll-tested feel of a campaign speech.”

The former Secretary of State is no doubt a bit surprised and even offended that people she thought were safely in her political fold are upset with her. Some of her other comments (e.g., that Bill and she were “dead broke” upon leaving the White House) have failed to endear her to those paying attention to what she is saying.

When Evan Wolfson sends a message about as subtle as a brick to the Left’s “chosen one” (Mrs. Clinton), she should take care. She could well be in for a very bumpy ride to the Democratic Convention.