How Parents Can Fight the Teachers’ Unions

Rob Jenkins
|
Posted: Jul 25, 2021 12:01 AM
Share   Tweet
The opinions expressed by columnists are their own and do not necessarily represent the views of Townhall.com. 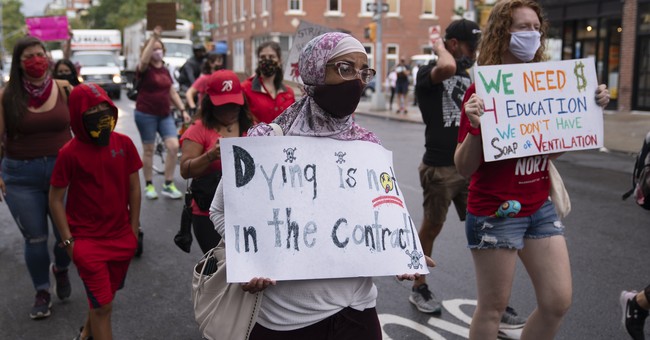 As I noted a couple of weeks ago, the largest national teachers’ unions—the National Education Association and the American Federation of Teachers—have essentially declared war on parents and students, doubling down on Critical Race Theory and the “LGBTQ+” agenda while continuing to advocate for forced masking and vaccination of children.

In that column, I called on teachers of good will, true allies of students and parents, to abandon the unions and stop paying dues, which is tantamount to supporting their agenda. The battle lines have been drawn. They are either with us or against us.

So much for teachers. But what about parents? How can they fight the unions?

Perhaps, as a parent, you can’t directly “defund” them, the way teachers can just by leaving, but there certainly are steps you can take that will have a long-term positive impact.

The most obvious, for those in a position to do so, is simply to take your kids out of the public schools. Fewer students equal fewer teachers, shrinking the pool of potential union members and lessening the groups’ power. Plus, your kids won’t have to deal with unionized teachers because they will no longer be in their classrooms.

Unfortunately, this solution presents problems of its own. As I’ve observed elsewhere, not everyone can afford private schools, which in some cases aren’t much better than the public schools anyway. And not all families are able to home school. Another possibility that I’ve been advocating involves creating affordable, community-funded private schools, but that hasn’t caught on yet.

The upshot is that many kids, at least for now, are stuck in the public schools. If you’re in that situation as a parent, what can you do to fend off the assault on your children from unionized (or union-affiliated) teachers?

First, you can get involved. Attend school board meetings and speak out against injustice and bad educational practice—as many parents are already doing all over the country. If you’re not part of this movement, join. Make your voice heard, in public meetings, emails to elected officials, letters-to-the-editor, and social media posts. If you’re not sure what to do or how to go about it, search Facebook for a group of like-minded parents in your area.

Second, it is absolutely imperative that you teach your values at home. Refuse to cede one iota of your parental authority and responsibility to the schools. Do not let teachers raise your children or teach them morality. That’s your job.

As much as possible, spend time daily with your kids. (The evening meal provides an excellent opportunity.) Ask them about their day and what they’re learning at school. If they’re being taught things that aren’t true—such as that all white people are racist or that some girls have penises—calmly explain why that’s wrong. (If possible, try not to completely undermine the teacher, whom you still need to teach math and reading).

Also, be sure to keep close tabs on your child’s curriculum. Spend time weekly on the class’s website. Look carefully at anything that’s sent home. Review their reading assignments. Once again, if you find something questionable, you will have the opportunity to counter it. And if something is truly objectionable, you can email or schedule a conference with the teacher to politely express your disagreement and displeasure. (Getting angry with these people rarely works. It just reinforces their prejudices. That said, there are times to get very angry indeed.)

Speaking of your child’s teachers, be sure to hold their feet to the fire. Both the NEA and the AFT have vowed that their members will continue teaching Critical Race Theory even in districts where it’s banned. They do not have that right. If you live in one of those areas, and you find your child’s teacher is flouting the rules, it’s time to involve the school’s administration—or even local politicians.

You can even be proactive. Before the school year starts, find out if your child’s teacher(s) is/are union members. (In right-to-work states like Georgia, where I live, the unions are often called “associations.” People will say, when I bring this up, “We don’t have teachers unions in Georgia.” That’s not entirely true. Teachers in Georgia and other RTW states might not be represented by unions in contract negotiations, but they can still join and pay dues—the NEA, for instance, boasts over 30,000 members in the Peach State—and in doing so, support the union’s agenda.)

If your child’s teacher belongs to the NEA or AFT, you could simply file that information away for future reference. Or you could go a step further and write to the teacher, at the beginning of the school year, to let him or her know that you know, that you will be keeping a close eye on what happens in the classroom, and that you object to your child being taught racism or sexual perversion.

You could even request that your child be transferred out of that class, although most principals would probably not accede to such a request, and the alternatives might not be any better. Still, it fires a shot across their bow, letting them know you will not be a passive by-stander in your child’s education.

Just understand that those last two suggestions could be considered preemptive attacks. There might be repercussions for your child, who could face discrimination from the teacher or even the administration. You’ll have to decide how far you’re willing to go—or how far you believe you need to go to protect your child.

But the bottom line is that, as a parent, you are not powerless. You can fight back. You can make your voice heard. You’re still the most influential person in your child’s life, and both individually and collectively, parents can, and should, have a great deal of control over what goes on in their local schools.