A Vice President for Abortion 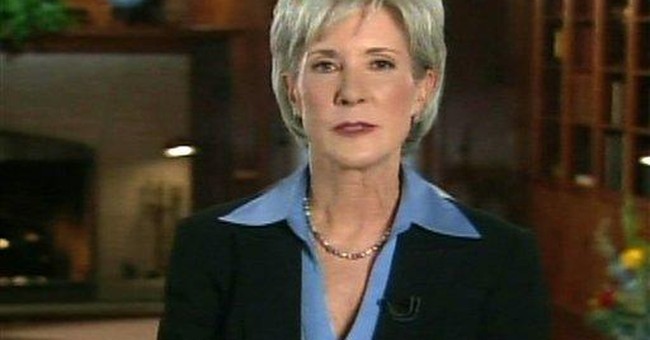 WASHINGTON, D.C. -- Archbishop Joseph F. Naumann, whose Roman Catholic archdiocese covers northeast Kansas, on May 9 called on Kansas Gov. Kathleen Sebelius to stop taking Communion until she disowns her support for the "serious moral evil" of abortion. That put the church in conflict with a rising star of the Democratic Party, often described as a "moderate" and perhaps the leading prospect to become Barack Obama's vice presidential running mate.

Naumann also took Sebelius to task for her veto April 21 of a bill, passed two to one by both houses of the Kansas Legislature, which would strengthen the state's ban on late-term abortions by authorizing private lawsuits against providers. That followed by a year her veto of a bill requiring explicit medical reasons for a late abortion, which was preceded by vetoing other abortion legislation in 2006, 2005 and 2003.

Those positions are necessary for Democratic politicians to pass their party's pro-choice litmus test, but Sebelius' connection with abortion is more intimate. She is allied with the aggressive Kansas branch of Planned Parenthood in a bitter struggle with anti-abortion activist District Attorney Phill Kline. There is substantial evidence she has been involved in laundering abortion industry money for distribution to Kansas Democrats. Kansas is the fiercest state battleground for abortion wars, making Kathleen Sebelius the national pro-choice poster girl.

The Almanac of American Politics talks of a "moderate image" for Sebelius, daughter of former Ohio Gov. John Gilligan. She picked up substantial Republican support in an easy 2002 win for governor and, after naming a former Republican state chairman as her running mate, was re-elected in a 2006 landslide. Chosen this year to deliver the Democratic response to President Bush's State of the Union Address, she told the nation, "In this time normally reserved for the partisan response, I hope to offer you something more: an American response." She gave the impression of reaching out across party lines in what was widely regarded as an audition for vice president as a Democrat able to carry a heavily Republican state.

Behind that facade, Sebelius sits at the apex of a complicated Kansas financing system involving the famous abortion provider Dr. George Tiller of Wichita. She controls Bluestem Fund PAC, distributing money to Kansas Democratic candidates. Tiller, one of the few American doctors still performing late-term abortions, contributed $120,000 to the Democratic Governors Association in 2006, which has given $200,000 to Bluestem.

In 2006, Sebelius recruited Paul Morrison, then the Republican district attorney of Johnson County, to run as a Democrat against Republican Kline's attempted re-election as attorney general. Morrison, financed by Tiller's ProKanDo PAC, outspent Kline and swamped him at the polls. But Kline then replaced Morrison as district attorney and promptly filed 107 charges against Planned Parenthood, including alleged "unlawful late-term abortions."

That triggered a ferocious continuing legal battle in which Sebelius appointees, both judicial and executive, have sabotaged Kline's efforts, with the Kansas Supreme Court barring a key witness from testifying. The confrontation continues even though Morrison resigned after the revelation last December of a two-year illicit affair. District Judge Stephen Six, Sebelius' new appointment as attorney general, has joined the lawsuit against Kline that had been led by Morrison.

In her 2006 abortion veto statement, Sebelius declared: "My Catholic faith teaches me that life is sacred. Personally, I believe abortion is wrong." Yet, a year later, Sebelius invited Tiller and his staff to a party at the governor's mansion. She thanked Tiller for his generosity in financing her election and Morrison's. In May 2007, Sebelius was featured at a Planned Parenthood fundraiser in Kansas City, Mo.

Obama, while asserting "nobody is pro-abortion," has said that if his two daughters "make a mistake, I don't want them punished with a baby." Would Sebelius, as an avowed Catholic, change her running mate's worldview that considers a baby to be a punishment? When Archbishop Naumann told the Kansas City Star this month that Sebelius must confess "scandalous behavior that has misled people into dangerous behavior," the governor's spokeswoman responded that "receiving Communion has not been a problem in the past for her." An answer came from Archbishop Charles Chaput of Denver, on his Website last week, by reproving "verbal gymnastics, good alibis and pious talk about 'personal opposition' to killing unborn children."