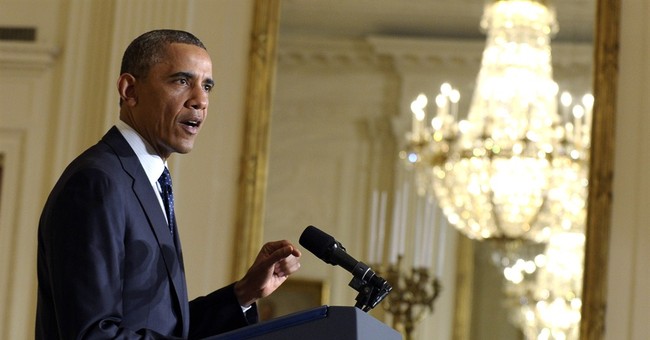 Editor's Note: This column was co-authored by Ken Blackwell.

President Obama is suffering the not untypical reality of Second Term blues, or blahs. His administration is beset by scandals, foreign and domestic. But his record can still be examined for a clear understanding of this president’s preferences.

Take the Romeike family, for instance. The Obama administration is relentlessly pursuing them through the courts. President Obama wants this family deported. These evangelical Christian home schoolers fled their native Germany in 2008. They pleaded for and obtained temporary asylum in this country.

They have lived since then in a quiet hamlet in Tennessee, home schooling their six children. Hannalore and husband Uwe were threatened with imprisonment and loss of custody of their children in Germany if they persisted in home schooling them.

Modern Germany is in many ways a model democracy. And we have praised German Chancellor Angela Merkel for saying that Christians are the most persecuted religious group. (If that is so, it is tragically because millions of Jews have already been driven from their homelands.) Even as we commend the Chancellor; however, we deplore the sad fact that Germany today is persecuting Christians who seek to home school.

The Obama administration denies that this is a problem. If the government’s values clash with those of Christian parents—especially on matters of faith and morals—it is no violation of your rights, the president believes. It’s alright for you to be compelled to send your kids to public schools. Remember this when Mr. Obama touts the benefits of his pre-school programs.

The Romeikes are appealing. They are being staunchly defended by Mike Farris and the Home School Legal Defense Association (HSLDA). But they must fight against the whole weight of the U.S. Government, hounded and harried by Attorney General Eric Holder. Religious freedom is not seen by this administration as a fundamental human right.

Compare President Obama’s treatment of the Romeikes with his treatment of Imam Feisel Abdul Rauf. This Muslim cleric has been welcomed as a naturalized American citizen. He holds the U.S. responsible for 9/11, but he has been coddled by this administration. His book is a virtual celebration of Islamist triumphalism. Published in Malaysia under the troubling title: A Call to Prayer from the World Trade Center Rubble: Islamic Dawa in the Heart of America Post-9/11.

Imam Rauf has threatened Americans with dangerous consequences if we do not comply with his demand to build a Mosque at Ground Zero. Rep. Peter King (R-N.Y.) has charged Imam Rauf with virtually blackmailing Americans. Said Mr. King:

"To me, it's almost as if he's blackmailing and threatening the United States that somehow if the mosque is not approved or people speak out against his mosque, you have to worry about being attacked by Islamic terrorists,"

It’s not almost, Congressman, it is an extortionate threat. Imam Rauf has said it would be dangerous for our national security if we did not allow him to build the mosque at the site where thousands of Americans and foreign nationals were murdered by Islamists engaged in jihad against us.

In previous years, publicly making such a threat would have resulted in speedy de-naturalization proceedings. Deportation would have followed swiftly. The maker of such threats would have found himself on the next plane home.

Well, Imam Rauf did find himself on a jet headed to the land of his birth. But he was on an official visit to the Persian Gulf, paid for by U.S. taxpayers. State Department spokesman P.J. Crowley defended this luxury junket on Fox News. Crowley said the State Department regularly sends American religious figures abroad to discuss religious issues.

Really? When was the last time your pastor, the head of your denomination, or a major Christian leader whose name you would recognize was invited on such an all-expenses paid trip? Spokesman Crowley must have been the kind of State Department apparatchik the late Sen. Jesse Helms had in mind when he said he was not angry with the State Department; he just wished they’d open up an American desk.

The Ground Zero Mosque story was a huge one in 2010. It doubtless contributed to the major political shifts of that tumultuous year. But we have not heard much about Imam Rauf since. He has been fairly quiet. That may be because he is ducking from accusations of embezzlement by some of the donors to his Cordoba Initiative.

In this Reuters report from last February, we read:

“The lawsuit, filed in Manhattan Supreme Court by several donors, accuses Imam Feisel Abdul Rauf of diverting $167,000 from private donations and $3 million from the Malaysian government for his personal use.

The money was intended for the Cordoba Initiative and the American Society for Muslim Advancement, two non-profits founded by Rauf aimed at educating the public about Islam and combating anti-Islam sentiment, the lawsuit said.”

Former federal prosecutor Andrew C. McCarthy has shown how Imam Rauf has been the public face for jihad-connected groups that are waging a “stealth jihad” against America .

The Obama administration reacts with horror to charges that they are anti-Christian and pro-jihad. But with a record like the one they are compiling daily, how can they deny it?

President Obama can do much to allay concerns if he will order his administration to drop their persecution of the Romeikes. It would be a goodwill gesture—to the Americans, for a change.