Robert Knight
|
Posted: Jul 02, 2019 12:01 AM
Share   Tweet
The opinions expressed by columnists are their own and do not necessarily represent the views of Townhall.com. 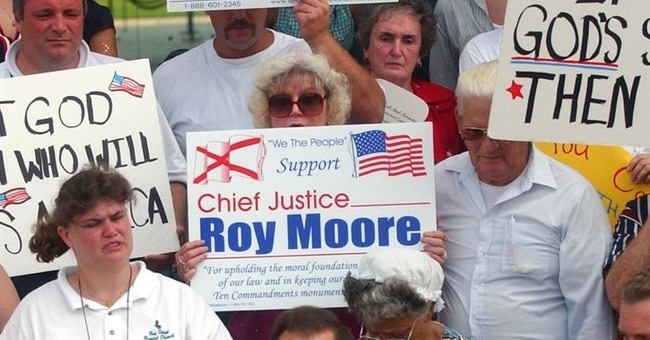 Socialism teaches that wealth should be held in common ownership, controlled by the state. Hence, the Democrats’ constant push to have government confiscate ever more income and power.

By contrast, the Bible teaches that God owns all things and that we’re merely stewards of His creation. When we look at each of the Ten Commandments, we see that they’re directly at odds with socialism.

You shall have no other gods before Me.

Socialism and its offshoots – communism, fascism, democratic socialism and National Socialism (Nazism) – enshrine the state above all other powers.  There is no room for God, which is why socialists are in a permanent war with the church and are bent on creating a faith-free society.

You shall make no idols.

Idols are anything that takes the place of God in the hierarchy of values.  Under socialism, sheer power over one’s fellow man is an idol. Another is building utopias – the unicorns of government because such perfect societies do not exist.

You shall not take the name of the Lord your God in vain.

When socialists take over a culture, it becomes depraved and perverse.  To enforce their new immoral order, socialists openly blaspheme God and particularly Jesus Christ.  Hollywood, which is famously leftist, has taken this road since Christian review boards abandoned their role in the 1960s, opening up films to any and all ways to shock audiences.

Sundays are no different from any other day in socialist societies.  In fact, people going to church on a Sunday are identified and often persecuted in places like communist China, where atheism is the official state religion.   Even in our market-based society, materialism – a necessary precept of socialism – has pushed respect for the Sabbath to the margins.

Honor your father and your mother.

Socialism has been at war with marriage and family since the French Revolution in 1789.  Unlike America’s revolutionaries of 1776, the Jacobins sought to wipe out Christianity and establish an all-encompassing government that supplanted the family.  Frederich Engels, co-author with Karl Marx of “The Communist Manifesto,” later wrote about the need to do away with marital fidelity and to assign children to communal rearing. He, Marx and other socialists correctly identified the family as a competing source of authority and a bulwark of the church.  Both stand in the way of collectivist regimes.

You shall not murder.

Many people misread this commandment as a broader order not to kill for any reason, which denies the moral difference between taking innocent human life and executing murderers. Socialists have long promoted abortion – the direct taking of an innocent human life – as a way to “liberate” women and men from parental responsibilities.

You shall not commit adultery.

In the 1960s, Americans became familiar with the term “free love,” but socialists have been promoting it heavily since the early 1800s.  Sex outside marriage, prostitution, pornography and abortion all militate against marriage fidelity.  Socialists deploy euphemisms like “choice” and “sex work” to cover the retreat from Biblical morality.

You shall not steal.

Socialism is grand theft. It uses the state to take earnings from productive people and redistribute it to create dependency and thus political power for those handing it out.  Slavery is 100 percent taxation – when someone else controls the fruits of one’s labor.  Socialist countries first control and then seize private property.  Marx summed up “The Communist Manifesto” in one sentence:  "Abolition of private property.”

You shall not bear false witness against your neighbor.

This is not just about telling lies in a witness situation but also about using lies to advance one’s wellbeing. Socialism is built on a mountain of lies about human nature, which is why it eventually must resort to violence. Marx wrote that “the ends justify the means,” which means you can do or say anything as long as it advances the revolution.

You shall not covet.

Socialism’s main engine is envy, stoking resentment against others who have more, even to the point of using violence to get it.  In Genesis, Cain killed Abel out of envy for Abel achieving God’s favor.  Envy was also on display when Satan promised Adam and Eve that if they defied God, then “ye shall be as gods.”  Coveting divinity got Satan kicked out of Heaven, and it’s what he and his minions continue to peddle in a variety of forms – including pride, envy and socialism.

Of Satan, Jesus said, “When he lies, he speaks his native language, for he is a liar and the father of lies.”

God originated life, natural marriage and love and gave us the Ten Commandments.  It shouldn’t be a mystery as to where the deceptive cake of socialism was baked.