Robert Knight
|
Posted: Jul 19, 2018 12:01 AM
Share   Tweet
The opinions expressed by columnists are their own and do not necessarily represent the views of Townhall.com. 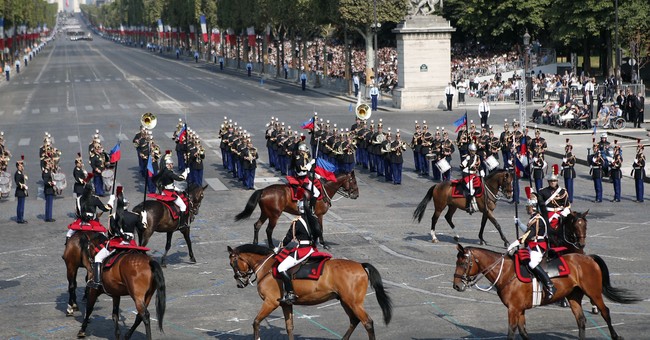 Last weekend, in addition to winning the World Cup soccer final against tiny Croatia, France got to celebrate Bastille Day, which commemorates the July 14, 1789 storming of the infamous Paris prison.

It’s fair to say the soccer match was worthier of feting.  The Bastille takeover sparked the French Revolutionaries’ overthrow of the royal aristocracy and the onset of the Reign of Terror.

France’s revolutionaries began by beheading as many people as possible, including colleagues not deemed sufficiently revolutionary.

Unlike America’s revolution, which the colonists fought to restore God-given rights usurped by King George III, the French Revolution ushered in the false religion of socialism, grounded in atheism.

If you compare the two over the past two centuries, it should be clear even to Bernie Sanders about which revolution has been more beneficial.  Here’s a quick recap:

In its 12 years, Nazi Germany plunged the world into a second World War and directly murdered six million Jews and five million others, including millions of Christians.

In its 74 years, the Soviet Union killed more than 20 million people and inspired other communist regimes, including China, to slay an estimated 80 million more people in pursuit of heaven on earth without God.  Socialism is even now destroying Venezuela and enslaving people from North Korea to Cuba.

America, on the other hand, has been a beacon of freedom and prosperity despite the stain of slavery that was overcome at huge cost.  America’s founders penned the world’s oldest and most copied Constitution, basing it on the premise that human rights come from God, not government.

Two more Judeo-Christian concepts animated America’s founders:  Created in the image of God, each person has a sacred right to life, but people are morally flawed from birth.  Hence, government exists to protect human life, but government itself must be restrained lest any man or men acquire too much power.  This was truly revolutionary, unlike the French experiment, which quickly devolved into tyranny leading to Napoleon’s ascent.

In the United States, political institutions (like the Senate) were borrowed from the Romans or Greeks, but the heart of America’s idea of limited government was explained by John Adams:  "Our Constitution was made only for a moral and religious people. It is wholly inadequate to the government of any other."

America’s progressives insist today that they are the American Revolution’s true heirs, even though their pedigree is from Paris, not Philadelphia.  They insist that they alone get to determine who can exercise the freedoms of speech, assembly, religion and even going about daily life without being harassed.

America’s ruling elites did not merely forget America’s heritage; they have deliberately suppressed it.  They look enviously at Europe, whose abandonment of Christianity and acceptance of mass migration has brought that continent to the brink of a new authoritarianism.  Try homeschooling in Germany, for instance.  Or speaking your mind in merry old England, which locks people up for failing to salute the rainbow flag or the crescent and star.

The same sort of mischief is percolating in America, held back only by the strength of American Christianity, which is why the Left assaults it at every turn.  Unchecked, the Left’s revolutionaries will fundamentally transform America into a place where we must lie to survive.

As religion writer Lauren Markoe writes: “LGBT people of faith say there is much work to be done to extend the spirit of the law to the nation’s churches.”  If that doesn’t chill you to the bone, you haven’t been paying attention to the fallout from the Supreme Court’s imposition of same-sex “marriage” or the court victories notched by transgender activists.

In the 1830s, French social critic Alexis de Tocqueville wrote that churches were the glue holding the new republic together.  Many scholars now instead credit the secular Enlightenment and ignore the Great Revivals.

“The Enlightenment is working,” writes Harvard University Prof. Steven Pinker. “Our ancestors replaced dogma, tradition and authority with reason, debate and institutions of truth seeking.”  Never mind the Man from Nazareth who proclaimed, “the truth shall make you free.”

As Washington Post columnist Robert Samuelson wrote approvingly of Mr. Pinker, “The scientific method displaced superstition.”  Which would have been news to Sir Isaac Newton or Francis S. Collins, who just led the completion of the Human Genome Project at the National Institutes of Health.

Stalled in other cultures, science bloomed in Christendom precisely because of the understanding that God created a discernibly marvelous universe and gave human beings predominance over all living things.  He also gave us the ability to scratch the surface of its intricate design, including its physical and natural laws.

The myth birthed during the French Revolution that true human liberty comes from humanism without God persists against all historical evidence.