Robert Knight
|
Posted: Apr 17, 2018 12:01 AM
Share   Tweet
The opinions expressed by columnists are their own and do not necessarily represent the views of Townhall.com. 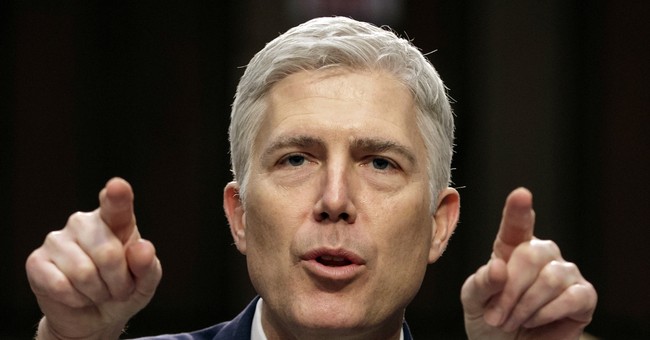 Federal judges sit on the bench for life and can either uphold the law or rule like tyrants. This puts judicial appointments right near the top of the most important things a president can do.

The newest Supreme Court justice, Neil Gorsuch, has already shown what a difference a constitutionalist can make. But we need many more to counter the hundreds of Clinton, Obama and Jimmy Carter-appointed judges who issue zany rulings that override common sense and thwart democratically enacted popular will.

Judge Reeves buys into the “viability” definition of human life beginning at 23 weeks. By contrast, science has confirmed that from the moment of conception, an entirely unique human being with DNA from mother and father is alive and growing exponentially. By the eighth week, the baby has a beating heart, arms, legs, organs and human shape. The judge’s ruling implies that babies before the 23rd week are something other than human, and so, practically speaking, ending their lives is no more consequential than getting rid of a mole or skin tag.

“If there is no viability the state has no real interest in telling a woman what to do with her body,” the judge said, deploying the abortion industry’s arbitrary rationale.

In 2014, Judge Reeves struck down Mississippi’s marriage law, which voters had approved by 86 percent to 14 percent. Seeing nothing uniquely valuable in the male-female complementarity central to marriage, he likened resistance to racism. This would be news to black and Hispanic Mississippians who voted overwhelmingly to define marriage as between one man and one woman and reject any comparison to morally neutral racial characteristics.

Throughout his two terms, Barack Obama made good on his goal to stack the federal judiciary with leftwing ideologues like Judge Reeves. His 333 appointees (George W. Bush had 330, Bill Clinton 379 and Ronald Reagan 384), which included two Supreme Court justices, have been hard at work to “fundamentally transform” America.

One of the most dramatic turns was on the 4th Circuit Court of Appeals, which hears cases from nine federal district courts in Maryland, Virginia, West Virginia, North Carolina and South Carolina and federal administrative agencies. In 2007, Republican appointees held a 7-5 majority. After six Obama appointments plus retirements, Democratic appointees now dominate 9-7 and have made their presence felt.

For example, in April 2016, a three-judge Fourth Circuit panel with two Obama appointees ruled 2 to 1 against school officials in Gloucester County, Va. that a girl identifying as a boy could use boys’ restrooms and the locker room.

Three months after the transgender ruling, a three-judge Fourth Circuit panel comprising two Obama appointees and a Clinton judge struck down North Carolina’s voter ID law on a 3-0 vote, accusing lawmakers of discriminatory intent. The Left has long argued absurdly that requiring voters to show some ID when voting is “racist.”

Another key Obama judicial takeover was at the U.S. Court of Appeals for the District of Columbia, perhaps the second most influential court in the country because it hears cases involving federal power.

In 2008, conservatives had a 6-3 edge. Mr. Obama quickly made four appointments, flipping it to a 7-4 Democrat majority. In June 2016, an Obama appointee and a Clinton appointee on a three-judge D.C. appeals panel upheld the Federal Communications Commission’s power grab of the Internet in the name of “net neutrality.” The ruling was a reversal of the same court’s opinion in 2010, when it ruled unanimously that Congress never gave the FCC jurisdiction over the Internet.

The good news is that President Trump understands the gravity of his opportunity. In 2017, he seated 12 appeals court judges, the most ever in the first year of a presidency. So far, he has seated 30 judges, including Justice Gorsuch, with 61 nominees in the pipeline, another 90 vacancies on top of that, and a likely Supreme Court appointment looming.

By all accounts, the newly robed Trump judges are restoring balance to the federal courts, which alarms Democrats like California Sen. Dianne Feinstein, who explained the stakes last December:

“The Supreme Court hears between 100 and 150 cases each year out of the more than 7,000 it’s asked to review. But in 2015 alone, more than 55,000 cases were filed in federal appeals courts. … In a way, circuit courts serve as the de facto Supreme Court to the vast majority of individuals who bring cases. They are the last word.”

When all is said and done, the last word on the Trump presidency may well be his counterrevolution to restore judicial integrity and the rule of law.