Vote Fraud Oughta Be a Crime

Robert Knight
|
Posted: Apr 27, 2017 12:01 AM
Share   Tweet
The opinions expressed by columnists are their own and do not necessarily represent the views of Townhall.com. 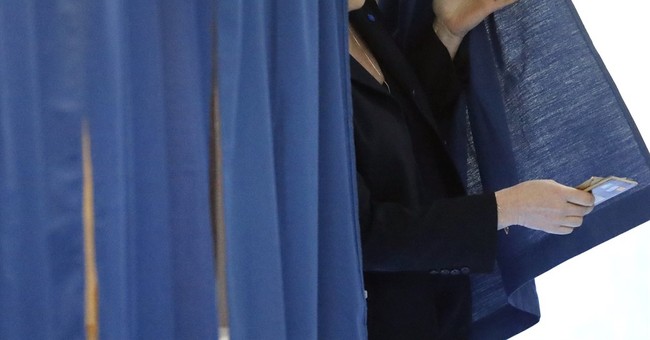 Over the last two decades the Left has been changing both the rules of our election process and America’s demographics to suit their political agenda.

A perfect example is Virginia Gov. Terry McAuliffe’s brazen attempt to get more than 200,000 convicted felons onto the state’s voter rolls in time for the last election. Undaunted after his slapdown by the state supreme court, the governor recently vetoed six common-sense election integrity bills sent to his desk.

One of the bills mandated that poll books include DMV photos. That seems like a no brainer, since it simplifies identification of registered voters. But the governor insisted that it might cause “voter confusion.”

The second and third (companion) measures extended existing law requiring a photo ID when acquiring absentee ballots. Several states have already done so. Virginia’s governor claimed that this would disenfranchise people. Really? What about disenfranchising citizens whose ballots are canceled by fraudulent votes?

The fourth bill would have barred paying people to register to vote. That should be another easy call. But Gov. McAuliffe asserted that no one was doing it anyway. That’s not the case, but why not make the practice even less likely by banning it?

The fifth bill would have registrars match their information against Social Security Administration and select state databases. What’s wrong with making sure that registration information is accurate?

The sixth bill provided for municipalities to initiate an investigation if they find that more people are registered to vote than the number of eligible residents. Alas, the governor concluded that reviewing potentially criminal behavior “could improperly disenfranchise” voters. How does ensuring that the votes are legal hurt legitimate voters?

Finally, a seventh piece of legislation would have the Department of Elections enable registrars to check other states’ rolls to identify those registered elsewhere. The governor found a way to kill this bill too, claiming it would result in “improper disenfranchisement.” Yet an interstate crosscheck initiative found 284,618 Virginians registered to vote in at least one other state.

Some criminal activities are nearly impossible to “catch in the act” – littering and vote fraud are good examples. We know that litterers abound because we see the evidence. But how often is someone caught dropping that Dixie cup? And, so it is with vote fraud, most of which is committed quietly through absentee and mail-in ballots.

Lack of interest by federal law enforcers was by design during the Obama years, according to former Justice Department voting section attorney J. Christian Adams. Obama officials zealously enforced the Motor Voter Law’s provisions to make it easy to register, but ignored Section 8, which requires maintenance of accurate voter rolls.

“In 2009, political appointees instructed Justice Department lawyers like me that they were shutting down enforcement of Motor Voter’s provisions that ensure only eligible voters were on the rolls,” Adams wrote recently in The Hill. “No enforcement efforts were filed in eight years.”

Governor McAuliffe’s vetoes demonstrate that the Left has abandoned subtlety. They want nothing to interfere with opportunities to commit vote fraud, especially for the criminal class.

In Philadelphia, an American Civil Rights Union lawsuit in 2016 forced election officials to open registration records, revealing not only that thousands of felons and non-citizens were on the rolls but that election officials refused to do anything about it.

It’s illegal in Pennsylvania for felons to vote, but the felons remain on the rolls and were included in poll books used on Election Day. There is no voter ID required in the Keystone state so nothing prevents incarcerated felons from getting absentee ballots or arranging for someone to vote in their name.

On April 28, the Third Circuit U.S. Court of Appeals will hear American Civil Rights Union v. Philadelphia City Commissioners to decide whether ineligible felons can remain on the books. The ACRU will argue that the National Voter Registration Act requires that only eligible voters should appear on the official voter lists.

Once committed, vote fraud cannot be undone. The only sensible approach is to take measures to prevent it in the first place.

Vice President Pence’s commission on voting integrity will have the opportunity to ensure that our electoral system safeguards the right of U.S. citizens to have fair and honest elections.