The ACLU Plays Scrooge to Orphans 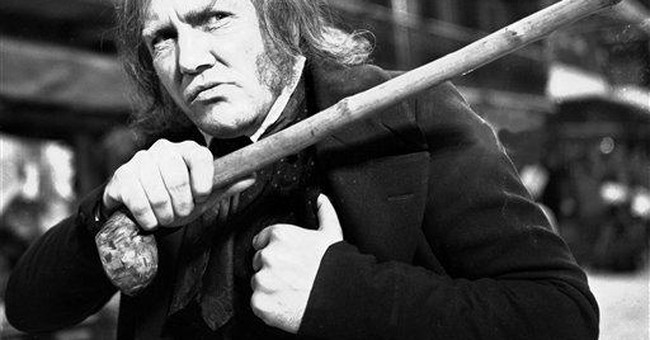 The God of the Bible proclaims in the Ten Commandments that “you shall have no other gods before Me.”

In our time, a secular faith has arisen that is just as jealous. Replacing fealty to God with fealty to government, it imposes an atheist faith on all public institutions, enforced mainly by American Civil Liberties Union (ACLU) attorneys and liberal courts.

A case in point: When a local charity teamed up with a middle school in San Marcos, California to raise money to feed orphans in Africa, they didn’t expect to take any heat.

But the ACLU caught wind of the project and blew it to kingdom come. In a threatening letter on Nov. 20, the ACLU warned the school to stop aiding the group or face legal trouble.

It seems the charity is infected secondhand with the virus known as Christianity.

Friends and Family Community Connection San Diego, the local group, was partnering with an Illinois-based openly Christian organization, Kids Around the World (KATW), to raise $3,500 to provide 14,000 meals for children in Tanzania.

This past week, the ACLU got its way, as the local charity severed the tie with KATW and “they asked us [the school] to find a different organization” to receive the funds, Anna Lucia Roybal, the San Marcos District spokeswoman, told me in a phone interview. “It was an unfortunate situation, but we have to make sure we’re in compliance with the law.”

In the Nov. 20 letter, David Loy, director of the ACLU’s San Diego/Imperial Counties chapter, gave the school a pat on the head for its “public spirit,” then threw the punch, citing the state’s No Aid Clause, which bars public institutions, including schools, from sullying themselves with anything smacking of religion.

The clause is in Section 5 of Article 16 of California’s Constitution:

“Neither the Legislature, nor any county, city and county, township, school district, or other municipal corporation, shall ever make an appropriation, or pay from any public fund whatever, or grant anything to or in aid of any religious sect, church, creed, or sectarian purpose, or help to support or sustain any school, college, university, hospital, or other institution controlled by any religious creed, church, or sectarian denomination whatever....”

Think about this: A public school’s parents and pupils assisting orphans in Africa, simply because the group distributing the aid is Christian, is deemed illegal.

So the school’s mere association with anything remotely Christian – even one step removed – is what offends the ACLU.

This smacks of religious cleansing, such as when a chapter of Mother Teresa’s ministry years ago was told that they could partner with New York City on projects for the poor only if they took down any religious symbols, such as crucifixes.

On March 28, after 10 years of litigation, the Salvation Army (SA) agreed to a settlement with the New York branch of the ACLU that allows the charity to receive government funds as long as it does not require employees to adhere to its Christian creed or to evangelize clients.

In other words, the venerable charity, which operates daycare centers, homeless shelters, HIV counseling and homes for the elderly, pledged silence on their mission, as described by Salvation Army founder William Booth: “I must assert in the most unqualified way that it is primarily and mainly for the sake of saving the soul that I seek the salvation of the body.”

And, he said, “To get a man soundly saved it is not enough to put on him a pair of new breeches, to give him regular work, or even to give him a University education. …if the inside remains unchanged you have wasted your labor.”

When America’s founders drafted the First Amendment, they did not intend to turn Christians into the equivalent of India’s caste underclass of Untouchables. But that’s the reality in a morally relativistic legal system that embraces atheism as a de facto official faith, with ACLU attorneys as its high priests.

Back in California, the ACLU’s Mr. Loy helpfully suggested to San Marcos Middle School Principal Tiffany Campbell that the funds be redirected to “a non-religious organization.”

Kids Around the World’s Web page describes itself as “a faith-based … organization dedicated to helping children and families who have been affected by war, poverty, illness, and natural disasters.”

The group has built 337 playgrounds, packed 11,229,038 meals and served more than 6 million children with its message of God’s love. KATW is now increasing operations in Liberia, where the Ebola virus has orphaned hundreds of children.

Yes, this virulent illness known as Christian charity is just the kind of disease that the ACLU’s secular priests and priestesses want government schools to avoid at all cost.