Where Is Today’s Tom Paine? 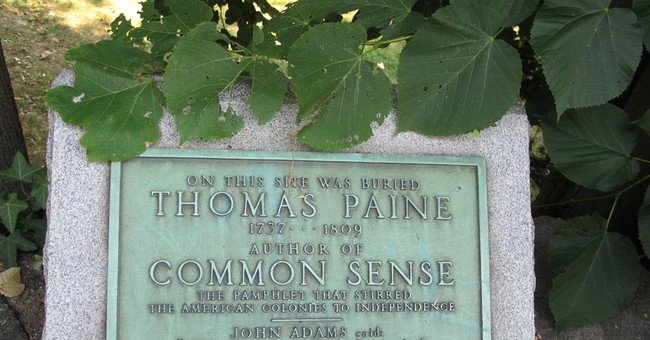 Given President Obama’s increasingly dictatorial rule, it’s a good time to dust off some thoughts on despotism by America’s “forgotten Founder,” Thomas Paine.

Best known for writing the revolutionary pamphlet Common Sense, Mr. Paine was instrumental in galvanizing support for the American Revolution. Many of his writings are commonly quoted, even while the source fades to misty memory.

A just-reissued edition by the American Civil Rights Union of the late constitutional attorney John Armor’s book These Are the Times That Try Men’s Souls: America – Then and Now in the Words of Tom Paine, with a new forward by former Attorney General Edwin Meese III, is a great reminder of the debt that freedom-loving Americans owe to this “propagandist founder.”

No written work other than the Bible had so much circulation before the American Revolution than Paine’s Common Sense. As Armor notes, “one copy of this book was sold for every two Americans who could read …. Almost all of the one-third of Americans who could read did read his words. Almost all the others heard them read in taverns and public meetings across the nation.”

Paine was the one who inspired people to start thinking of themselves as Americans instead of just New Yorkers, Virginians, or Rhode Islanders. Paine was the first to write the term “United States of America.”

The most famous assessment came from John Adams: “Without the pen of Paine, the sword of Washington would have been wielded in vain.”

It’s true; his pamphlets got the colonists so ticked off at King George that they took up arms to win independence.

“These are the times that try men’s souls,” Paine wrote. “The summer soldier and the sunshine patriot will, in this crisis, shrink from the service of their country; but he that stands it now, deserves the love and thanks of man and woman.

“Tyranny, like Hell, is not easily conquered. Yet we have the consolation with us, that the harder the conflict, the more glorious the triumph. What we obtain too cheap, we esteem too lightly.”

It’s not hard to imagine what Paine would say about President Obama’s order ignoring Congress and granting effective amnesty to nearly five million illegal aliens, and then issuing a second order making them eligible to register with Social Security and Medicare. All of this came on the heels of a crushing mid-term election, when voters hoisted a gigantic stop sign. Mr. Obama stepped on the gas and blew right through it.

He and his enablers assure us that mass amnesty will boost federal tax revenue immediately. But it will cost the Treasury $2 trillion when the amnestied begin applying for benefits, according to a Heritage Foundation estimate. The system is already going broke. This is like tying an anvil onto Wile E. Coyote’s leg as he’s plummeting down the cliff.

Apart from cost, the orders clearly violate the Constitution, as alleged by 17 states led by Texas in a lawsuit filed Wednesday.

The goal of Mr. Obama’s continued abuses of power is easy to deduce: a bigger and more powerful centralized government, fueled by more dependency. That’s not good news except to those who can manipulate it to their advantage, like Washington’s permanent ruling class.

Like other demagogues, such as Venezuela’s Nicolas Maduro, Mr. Obama demonizes opponents while issuing bribes. Speaking to students in Washington, he blasted a House bill to rein in his amnesty, and said the Republicans should instead “help more young people access and afford higher education.” Ignore my unconstitutional conduct; I want to give more of other people’s money to you.

“Society in every state is a blessing,” Paine wrote. “But government even in its best state is but a necessary evil; in its worst state, an intolerable one….society is produced by our wants, and government by our wickedness.”

That’s a far cry from the liberal claim that we’re basically good and just need more direction from government in order to thrive.

Regarding rulers, Paine was not kind: “Of more worth is one honest man to society and in the eyes of God than all the crowned ruffians that ever lived.”

You mean like a would-be king who said, “if you like your health care plan, you can keep it?”

Tom Paine is not revered like Benjamin Franklin, Thomas Jefferson or James Madison, thanks to his post-Revolution writing and conduct. He transitioned from apparently Christian-inspired views to attacks on all organized religion, joined the French Revolution, and even took a cheap shot at – George Washington.

That’s more than enough to get you thrown out of a meeting of the Daughters of the American Revolution.

Nonetheless, we need to return to Paine’s timeless words authored during America’s first crisis of authority.

Nobody else has written so eloquently or passionately about freedom. In fact, we might ask, where is today’s Tom Paine?