Taxpayers Ride the Rails to Insolvency 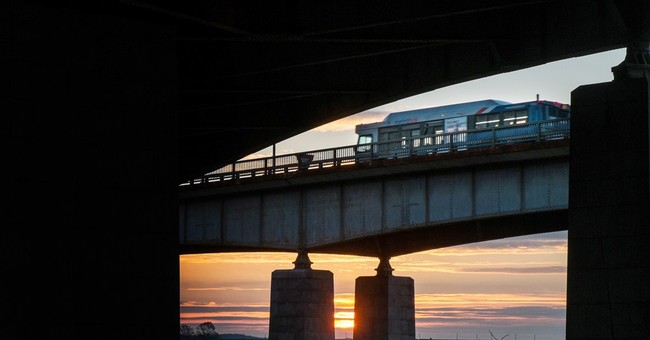 The Federal Transit Administration (FTA) says in a new report that the light-rail “Purple Line” expanding Washington, D.C.’s rail system into the Maryland suburbs will cost a billion dollars more than originally estimated.

Well, of course it will. Only suckers believe in initial estimates on any government project.

Remember the Big Dig? The Central Artery/Tunnel Project in Boston, on which construction began in 1991, was supposed to be completed in 1998 at a cost of $2.6 billion. The price tag ballooned to a shocking $15 billion by 2007. But wait. That giant sucking sound is now projected to cost federal and state taxpayers more than $24 billion, including interest. Debt service alone is $100 million annually.

Over on the Left Coast, ground-breaking is slated this summer for the Japan-style, high-speed bullet train between Los Angeles and San Francisco.

In a statewide referendum in 2008, 53 percent of California voters approved the rail project. The state then issued $10 billion in bonds and received $3.5 billion in “stimulus” money from the Obama administration. But this is peanuts. A billion here and a billion there is not going to build this modern marvel.

“The project’s current cost estimate of $68 billion is already 51% above the initial estimate of $45 billion, made in 2008, before the public vote,” writes Richard M. Salsman in Forbes. “Last fall, the California High-Speed Rail Authority, which oversees the boondoggle, said the final cost would more likely be $98.5 billion, and the completion date 2033 instead of the initial estimate of 2028. Only after a public outcry was $30 billion shaved off that higher estimate, bringing it down to $68 billion.”

Undaunted, Gov. Jerry Brown’s administration is plowing ahead, fortified by yet another study, which should reassure California’s beleaguered taxpayers, who will foot most of the bill.

According to the Los Angeles Times, “Despite the prospect of declining revenue and rising costs, researchers predicted that the 500-mile network — with construction paid for by a blend of state and federal money — will be self-sustaining and not require a government subsidy to help pay for operations.” Sure it won’t.

Please don’t get me wrong. I’m not suggesting we abandon mass transit, but we sorely need some budgeting reality. Can you name any self-sustaining passenger rail system outside of, say, Disney World?

How about Amtrak? The national, taxpayer-subsidized railroad system has run deficits in every year of operation since Richard Nixon signed the Rail Passenger Service Act on Oct. 30, 1970. During the same year, by the way, Mr. Nixon launched the Environmental Protection Agency (EPA).

Other than Mr. Nixon’s Watergate scandal and fighting communism early in his career, it’s hard to see why liberals still hate him. On Aug. 15, 1971, Mr. Nixon even announced, “I am today ordering a freeze on all prices and wages throughout the United States.” Again, for a true-believing liberal, what’s not to like?

Getting back to Amtrak, when it began operations in 1971, it was

For perspective, Amtrak’s fiscal 2014 request for federal subsidies is $2.6 billion.

Then there are unpredictable events that can be quite expensive. In its fiscal 2014 budget request, Amtrak reported “an estimated $94 million of operating losses from Superstorm Sandy in the form of lost ticket revenue and one-time recovery costs,” not counting more repair costs which “could increase over time.” You think?

There’s more. Many Amtrak employees are reaching retirement age: “Each year an actuary updates Amtrak’s forecast of post-retirement health care and insurance costs for current and projected retirees. This liability, which is not funded, is approaching $1.4 billion and is growing by tens of millions of dollars annually.” The key words here are “billion” and “not funded.” Yikes.

If Sandy was such a shock to Amtrak’s East Coast system, imagine what it would cost to repair the bullet train after a major earthquake ripped up California along the San Andreas Fault or even one of the lesser faults.

It might even make people forget the state’s ongoing drought, and the debate over how much water to divert from the Central Valley and how much farmland to seize in order to save the Delta smelt and other species of fish. The Delta smelt is on the Endangered Species List. If something isn’t done, the 3-inch fish might disappear, leaving us as a nation with one less type of smelt. And who would want our children to inherit such a country?

Not to alarm you, but California officials are mulling a $25-billion proposal that includes two gigantic water tunnels 35 miles long and 40 feet in diameter. Now that’s a big dig.

As I was writing this column, it occurred to me that all the government boondoggles put together pale in comparison to the escalating costs and outright fraud in Medicare, Medicaid, food stamps, and the big enchilada, Social Security.

It’s so mind-boggling that it makes me feel a little better about Maryland’s Purple Line costing “only” another billion.