A Duck Call to Sanity 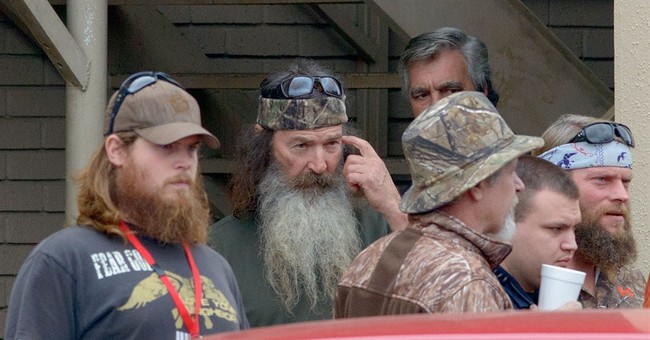 For the second time in a year and a half, the radical activists who want to force all Americans to embrace the values of Sodom and Gomorrah have reached too far and come back with burned fingers.

The A&E Network’s suspension of “Duck Dynasty” patriarch Phil Robertson for his frank comments in answer to an interviewer in GQ magazine about homosexuality, sin and the Bible, has churned up a national reaction not seen since some big city mayors put on their inner Stalin and tried to run Chick-fil-A out of their burgs.The chicken restaurant chain’s founder had said God knew what He was doing when He created marriage as the union of a man and a woman.

Mr. Robertson’s crime was to coarsely express the normal male preference for female anatomy. Plus, he paraphrased Bible verses in 1 Cor. 6: 9-10, which list many sins, including homosexuality, which keep people out of the Kingdom of God. The good news, which wasn't in the GQ article, is in verse 11: “And such were some of you: but you are washed … you are justified in the name of the Lord Jesus….”

In both cases of intended intimidation by leftwing activists, average Americans reacted swiftly and in massive numbers to support the embattled targets. Late Friday, the usual time when corporations and chastened politicians cave, A&E said that Mr. Robertson was back and the full cast of "Duck Dynasty" would make new episodes, earning the family $200, 000 each.

The clearest sign that corporate America is out of touch with Main Street America was Cracker Barrel’s initial decision to side with homosexual activist groups to remove Duck Dynasty merchandise from the restaurant chain’s “country stores.”

Thanks to social media and conservative outlets, Cracker Barrel got an earful from millions of customers. Swiftly, the company issued a retraction of the order along with an apology.

If I were on the Cracker Barrel board, I would sack whoever thought it was a good idea to recklessly risk offending the company’s down-home customer base and side instead with people whose Hollywood constituency mocks everything that makes Cracker Barrel a warm fuzzy for so many people.

Did they really think the Village People and Blue State liberals would make up for the loss of millions of disgruntled Christian customers from across the South and Midwest?This is not just a mistake, as the company put it. This was joining the Culture War at a crucial moment on the wrong side.Cracker Barrel’s customer base is in largely Christian areas. That might help explain why Cracker Barrel has been one of the few major companies rated at the bottom of corporate scorecards compiled by leftwing pressure groups.

The speed with which Cracker Barrel executives realized the enormity of the “mistake” should send a message to corporate America and to politicians in both major parties: Christians and other customers with traditional values are angry and are not going to take it anymore.

Obamacare will be the big issue in 2014 and it should be. It’s not just about health care but about decadent elites who tell us what’s good for us.They hate the likes of Phil Robertson.

Candidates outside of deep blue enclaves like San Francisco or Chicago will do well to campaign against Obamacare, and for constitutional, small government. It’s all about resistance. The Tea Parties are the vehicle for many people who desire to go beyond what seems like a rigged game and restore America to be a self-governing nation.

Even some conservative commentators seem more concerned with Phil Robertson’s choice of terms than what A&E did to him in the name of “tolerance.”Perhaps they might want to review a stunning statistic.In 2011, according to the Centers for Disease Control, 94 to 95 percent of HIV cases among boys and young men were linked to homosexual sex.This includes males 13 years old (think about that for a moment) to 24 years of age.And Phil’s the guy who has the wrong idea?

This is why Mr. Robertson had to be treated like a criminal.He shined a light on realities kept behind the media’s curtain.For a literary equivalent of what he did, see the fearless boy in “The Emperor’s New Clothes.”

This duck story is not flying away anytime soon.The Internet is loaded with support for the Duck Commander.Ohio-based Faith2Action, with help from Texas-based VisionAmerica, launched a website, www.mailtheduck.com last week offering at no charge to send postcards to A&E urging Mr. Robertson’s reinstatement on “Duck Dynasty.”For a small donation, respondents can mail A&E a rubber duck.Within 24 hours, the site had 2,000 requests for postcards and orders for 500 rubber ducks, according to Faith2Action founder Janet Porter.

In the GQ article, Phil Robertson gave a fuller picture of sex, sin and redemption than most media accounts reported.Later, he led a Bible study in which the British newspaper the Daily Mail noted that he emphasized his own sinful life and need for repentance and salvation, which he said was available to everyone.

In every episode of “Duck Dynasty,” the Robertson clan emphasizes faith, independence and small-town values.Given the continued outpouring of support, the path to America’s renewal might just run through a Louisiana bayou and a bearded contingent of Bible thumpers.