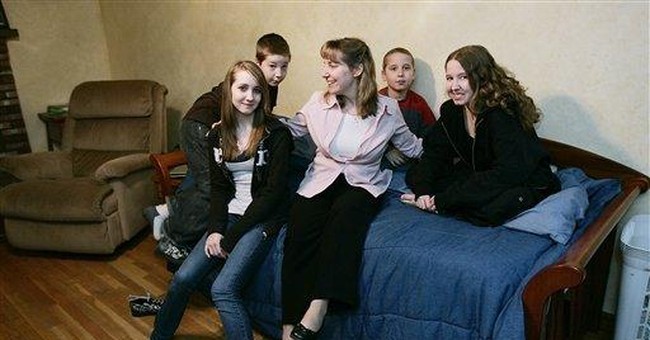 Years ago, when I was writing a book called The Age of Consent, about moral relativism, I was warned by a book agent that it wouldn’t fly with New York publishers.

I had committed unpardonable sins in an early draft: defending marriage as the union of a man and a woman, and critiquing the idea of putting women into combat. I also defended stay-at-home moms.

“The gays and feminists run the New York publishers, so you have to take out that stuff,” the agent told me, adding that my chances of publication would improve if I backed the idea of “gay families.”

“Let me get this straight,” I said. “In a book about moral relativism, you want me to equate motherless or fatherless families by design with those of families anchored by married couples?”

It didn’t happen. And I didn’t snag a New York publisher. This was fine, because the estimable Dallas-based Spence Publishing Company gave the book a good ride.

I thought about that conversation with my agent while reading a fascinating essay in the current edition of The City, Houston Baptist University’s perceptive, readable quarterly.

Dr. Markos begins by noting that “academic feminism rests on the fiercely-held belief that there are no essential differences between the sexes,” the shibboleth amply exposed by post-feminist authors Christina Hoff Sommers, Jennifer Roback Morse and others, not to mention modern conservatism’s founding mother, Phyllis Schlafly, and Concerned Women for America’s founder Beverly LaHaye.

Having taught home-schooled girls in his classes over the past 30 years, Dr. Markos observes that they are head and shoulders above feminists in every way imaginable:

“They possess a razor-sharp wit with which they can cut pretentious people (especially males) down to size, but they rarely use this skill, and only when they are sorely provoked.”

They “have a firm knowledge of the Bible, but they (unlike my biblically-literate male students) don’t engage in forensic debates over minor theological points of controversy; they will, however, step in if the boys get too contentious or triumphalist.”

There’s more. Home-schooled girls “have wonderfully synthetic and creative minds that make connections across disciplines … they are gifted in the arts; almost all of them can sing and most play instruments and draw. … They have not bought in to the lies of our modern consumerist state: that is to say, they do not judge their value and worth on the basis of power, wealth, or job status.”

All of them plan on being wives and mothers – whatever else they do.

There’s a reason that anything by Jane Austen is a still a hit and why “Downton Abbey” attracts millions of viewers. Feminine strengths are on full display, largely unfiltered by politically correct feminist lenses.

For more than six years, I worked at Concerned Women for America (CWA), where I met dozens of extremely bright women who actually liked men. They laughed—and still do—at feminists who confuse equality with sameness.

They also take issue with feminists’ role in promoting promiscuity and the decline of marriage, which is the real “war on women.”

“We are fast approaching the point of no return in terms of the harms from casual sex, cohabitation, and the growing number of single mothers,” writes Janice Shaw Crouse, Senior Fellow for CWA’s Beverly La Haye Institute. “Re-establishing the walls of morality, faith, and marriage is no longer something that would be merely nice; it is a vital necessity for the well-being of the nation's girls and women.”

Far from being sheltered and ignorant, as feminists portray Christian women, the CWA ladies are nobody’s fools. Prof. Markos could have been talking about them when he wrote of home-schooled girls:

“They have the wit and discernment to perceive that the feminist is finally a greater threat than the male chauvinist: for whereas the chauvinist demeans femininity, the feminist dismisses it altogether as a social construct that has no essential grounding in our God-created soul.” It’s no wonder feminists hate the feminine Sarah Palin with white-hot intensity.

When I was at the Hoover Institution doing research for The Age of Consent, I was amazed at the amount of material in Stanford’s library and courses that exalts gender confusion. Androgyny was the wave of the future, and feminism the underlying creed.

Increasingly, they are given the false choice of misusing their sexuality, like Miley Cyrus, or keeping a chip the size of an anvil on their shoulders.

A third way is to seek God’s wisdom in how to live life fully, like the accomplished woman in Proverbs 31: 25-26: “Strength and honor are her clothing; she shall rejoice in time to come. She opens her mouth with wisdom, and on her tongue is the law of kindness.”