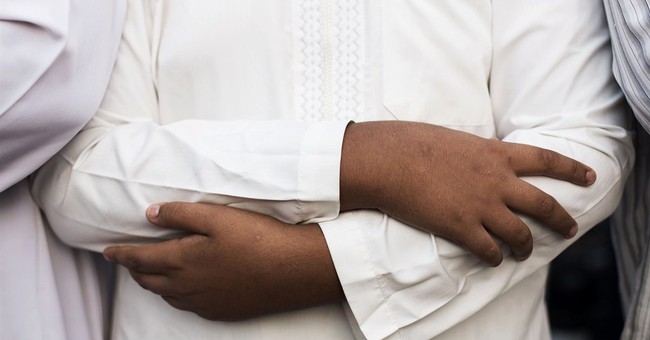 Imagine that it was Sept. 12, 2001, and you opened your newspaper, gazed in horror at the many photos of unspeakable carnage at the Twin Towers, and found this story:

Fast forward to this past week, and you could have read it for real. The ACLU is upset that New York City police, who lost 23 officers when Muslim extremists flew hijacked passenger jets into the World Trade Center on September 11, 2001, killing a total of 2,753 people and more at the Pentagon and in Pennsylvania, are keeping an eye on the city’s mosques in order to thwart further terrorist attacks.

If you are a university-trained moral relativist, you might ask huffily, “Why aren’t they monitoring the Episcopalian community? Or the Jewish community?” You could even demand that the Campfire Girls be put under the same surveillance. And, for good measure, how about that shady-looking group of nuns over near the subway stairs, eating ice cream cones?

The simple answer is that no Episcopalians, Jews or nuns have flown airliners into buildings, planted pressure cooker bombs in knapsacks at a Boston Marathon finish line, killed more than a dozen fellow soldiers in Texas while yelling “Allahu Akbar,” systematically executed non-Muslim shoppers at a Kenya mall, burned down churches in Egypt or beheaded Christian girls on their way to school in Indonesia.

All 19 airliner hijackers on September 11, 2001 were affiliated with al-Qaeda, with the majority from Saudi Arabia. Not one carried an Episcopal Book of Common Prayer – not even the 1928 version.

The ACLU’s Oct. 24 letter to two officials in the Justice Department’s Civil Rights Division, signed by 125 state and national pressure groups, claims that “for over a decade, the [NYPD] has engaged in unlawful religious profiling and suspicionless surveillance of Muslims in New York City (and beyond). This surveillance is based on the false and unconstitutional premise, reflected in the NYPD’s published ‘radicalization’ theory, that Muslim religious belief, practices, and community engagement are grounds for law enforcement scrutiny. That is a premise rooted in ignorance and bias.”

Given the evidence that the Tsarnaev brothers, Chechen Islamist immigrants, perpetrated the April 15, 2013 Boston Marathon bombing that killed three people and injured 282, including 14 people who had limbs amputated, one would think the New York cops are looking in the right places for the next set of Gotham City perps.

There’s also the 2007 survey that found one quarter of U.S. Muslim adults aged 18 to 30 felt that suicide bombings against civilians “to defend Islam” are “often,” “sometimes” or “rarely” justified.”

Does this mean all Muslims are dangerous? Of course not. The vast majority are solid citizens, many of whom fled Muslim regimes for American freedom. The cops should tread lightly in a country with a First Amendment. But they cannot stop surveillance if they want to head off another 9/11 massacre.

It was apparently divine intervention that spared dozens of people in New York’s Times Square on May 1, 2010, when the trigger on a bomb-laden van failed. On Oct. 5, 2010, Pakistan-born Faisal Shahzad, a naturalized U.S. citizen living in Bridgeport, Conn., was sentenced to life in prison for the attempted mass murder.

In 2010, Adis Medunjanin, a Bosnian immigrant living in Queens, was found guilty of plotting to bomb New York’s subways in 2009. He was sentenced to life in prison. In 2012, Najibullah Zazi, the alleged mastermind of the plot, also got a life sentence. He told investigators that he was inspired by the 2005 London subway bombings and was motivated by revenge for the 2006 rape of an Iraqi girl and the murders of her and her family by U.S. soldiers (who were convicted and given life sentences).

The ACLU’s letter goes on: “Unsurprisingly, the NYPD’s surveillance program has had far-reaching, deeply negative effects on Muslims’ constitutional rights by chilling speech and religious practice and harming religious goals and missions.”

Really? What kind of speech or religious practices are being chilled? Could it be the inflammatory, anti-Semitic and anti-Christian materials that a Freedom House report documented as being alarmingly ubiquitous in U.S. mosques before being exposed?

The ACLU letter notes that the Muslim community is the target of “surveillance that is not visited upon the public at large or upon those belonging to any other faith.” Well, the public at large in New York City exceeds 8 million people. If you’re looking for terrorist activity, you might want to narrow down the pool of suspects.

As for why the police still have a surveillance program, let’s end with some reminders from a 911 list of casualty numbers in New York magazine:

I’m truly sorry for all the innocent Muslims who are inconvenienced by the police surveillance. And I hope the police don’t step over the line.

But God bless the New York cops for trying to keep this horror from happening again.