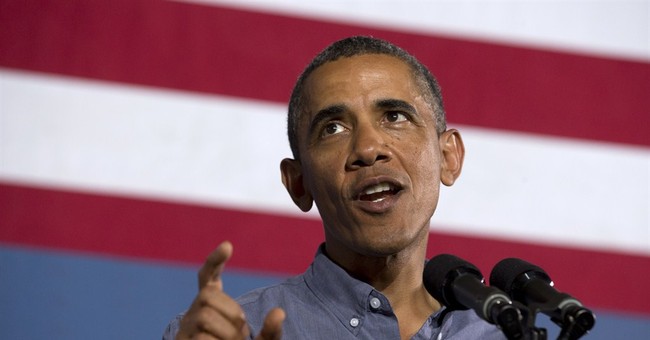 With a first term marked by executive overreach, Barack Obama is getting ever cozier with governing by decree in the fifth year of his rule.

The “people” elected him twice, so why should he wait on Congress to enact legislation? He said as much when he declared, “we can’t wait,” while freeing federal agencies from the bondage of working within the law.

Last week, the Justice Department sued Texas over its voter photo ID law. Never mind that the U.S. Supreme Court upheld a similar Indiana law in 2008, finding no minority voter suppression. Or that the Court recently struck down the portion of the Voting Rights Act that gave the Justice Department veto power over voting laws in mostly Southern states.

This is the same administration that used the Internal Revenue Service (IRS) and other agencies to inflict 17 audits and investigations on True the Vote founder Catherine Engelbrecht for daring to work to clean up the nation’s voter registration rolls.

Given the pattern, it’s clear that the Obama administration will use any means necessary to maximize its power, including keeping the system vulnerable to vote fraud.

While he piles up federal debt, his lawless bureaucrats at the IRS, the National Security Agency, the Environmental Protection Agency and the Department of Health and Human Services run roughshod over mostly the middle class, Mr. Obama is actually going around the country proclaiming himself a champion of – the middle class.  It’s a bait and switch with his natural enemies, who, unlike him, value self-sufficiency and bourgeois moral values.

This is right out of the playbook of his mentor, Chicago community organizer Saul D. Alinsky, who told a Playboy interviewer in 1972:

“One thing I've come to realize is that any positive action for radical social change will have to be focused on the white middle class, for the simple reason that this is where the real power lies.”

A perceptive social observer, Alinsky described the “middle class” in a passage that could be delivered today:

“They're the first to live in a total mass-media-oriented world, and every night when they turn on the TV and the news comes on, they see the almost unbelievable hypocrisy and deceit and even outright idiocy of our national leaders and the corruption and disintegration of all our institutions, from the police and courts to the White House itself. “Their society appears to be crumbling and they see themselves as no more than small failures within the larger failure. All their old values seem to have deserted them, leaving them rudderless in a sea of social chaos. Believe me, this is good organizational material.”

In his 1972 book Rules for Radicals, Mr. Alinsky preached moral relativism, writing that: “Ethical standards must be stretched with the times.”

He was talking about the Marxist concept of the ends justifying the means. To illustrate his point, he cited Abraham Lincoln’s “suspension of habeas corpus, his defiance of a directive of the Chief Justice of the United States, and the illegal use of military commissions to try civilians.”

If the cause is noble – in Lincoln’s case, ending slavery – it’s the duty of the commander in chief to break the law and even override the Constitution. Among other things, Lincoln jailed Southern-sympathizing Maryland legislators and shut down newspapers.

No wonder Obama backer Steven Spielberg came out with his 2012 epic movie Lincoln.  As I watched this well-made film about the first Republican president, I couldn’t help think that it was a clever way to justify the ruthlessly partisan enactment of Obamacare.  It’s not as if Spielberg wanted to make Republicans look good.

A middle class can only prosper under a predictable legal system that guarantees property rights and due process. Right now, official lawlessness abounds at the highest levels.

The U.S. Supreme Court created a constitutional pretext out of thin air to uphold Obamacare.  Then Obama unilaterally suspended the employer mandate.

On an extralegal roll, the Court also ruled that Congress can’t define marriage, even for federal purposes. Then they effectively destroyed the right of Californians to use the proposition process to amend their state constitution.  Even when the Court got it right, such as when the justices struck down outdated portions of the Voting Rights Act, the administration sued Texas as if nothing had happened.

Last week, a county clerk in New Mexico decided that he didn’t like the state’s marriage law and began illegally issuing licenses to same-sex couples. Well, why not? Laws are made to be broken. We have it from the highest earthly authorities. The same week, the New Mexico Supreme Court ordered a Christian couple to photograph a lesbian ceremony or face fines in clear violation of their First Amendment guarantee of religious freedom.

As the rule of law slips away, Americans are increasingly wondering how long we can remain a free people.

“The despair is there,” Alinsky said. “Now it's up to us to go in and rub raw the sores of discontent, galvanize them for radical social change.”

With left-wing radicals now ensconced as the Establishment, Alinsky’s words could well apply instead to today’s middle-class revolutionaries – the Tea Parties.