National Suicide by Self Execution 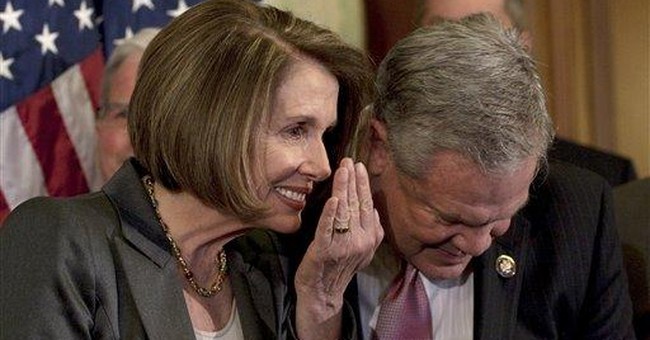 Trending
Assisted suicide is still illegal in most of the United States. But Nancy Pelosi, Harry Reid and Barack Obama are doing their impression of the helpful Dr. Kevorkian, egging on the House to approve a “self-executing” rule that would kill the nation’s health care system by suffocating it under the big hand of government.

Aptly named the “Slaughter Rule” after House Rules Committee Chairman Louise Slaughter, D-N.Y., the idea is for House Members to vote on a batch of “fixes” to the Senate bill--not the original bill itself--and tie the two bills together. Then the House--without an actual vote--would “deem as passed” the Senate bill.

Dreamin’ Deemer House Speaker Pelosi, who actually said, “We have to pass this bill so that you can find out what’s in it,” insists this is a fair way to enact a measure that the vast majority of Americans find hazardous to our health. The bill has 2,733 pages of individual and employer mandates, trillions in new spending, new taxes, new agencies and taxpayer funding of abortion. It can’t be fixed, and won’t be. It is socialism with a stethoscope around our necks, pulled tight.

Apparently, only a third of the nation comprises “real Americans.” The rest of us are scared stiff by this impending government takeover of one-sixth of the economy that would change forever the relationship between citizens and the state.

The only thing standing between the scoundrels who hatched this travesty and final passage are the American people. They need once again to make it clear—now—that this won’t fly. Waiting until November doesn’t cut it. No major program has ever been overturned, even after promises were made. Think about the Department of Education, which now resembles a giant Chia Pet doused with tons of Miracle-Gro.

Some folks are not waiting until November. New Jersey’s tea parties are mounting a recall effort against Sen. Robert Menendez, a big-spending Democrat who voted for the unconstitutional health care bill and other tax-heavy measures. A New Jersey appeals court on March 16 approved the petition process, although gatherers must wait another 35 days to see if Menendez, the secretary of state or the state elections board appeals the decision. Then the recallers have 320 days to submit 1.3 million signatures to put Menendez on a ballot. If they do it soon enough, the senator, who is up for re-election in 2012, could find himself facing voters in November.

The judges did not rule on the constitutionality of recall itself, which a previous New Jersey secretary of state had said was illegal even though it is in the state constitution. They said they would decide that if and when enough signatures are submitted. Fine. Let them dare rule 1.3 million New Jerseyeans out of order someday.

New Jersey is one of nine states that have broad recall language and which could put a total of 12 U.S. senators on the ballot in November if recall campaigns are successful. The other states are Colorado, Louisiana, Michigan, Montana, North Dakota, Oregon, Washington and Wisconsin. More information can be found at the American Civil Rights Union’s Website at recallcongressnow.org.

From the White House to Capitol Hill, Democrats seem hell-bent on self-execution on the way to doing the same to our nation. And they are still dissembling like the boy wiping away crumbs after being caught red-handed at the cookie jar. As The Wall Street Journal observes:

“Mrs. Pelosi and the White House are resorting to these abuses because their bill is so unpopular that a majority of their own party doesn’t want to vote for it.”

Members will try to claim that they didn’t actually vote for it when they face citizens in their districts, but that kind of hocus-pocus is not going to work.

When the dust settles in November, the “self-executing” rule may be the epitaph of many political careers of Democrats who facilitated this mess. But, God willing, it won’t be an epitaph for this free nation of ours.