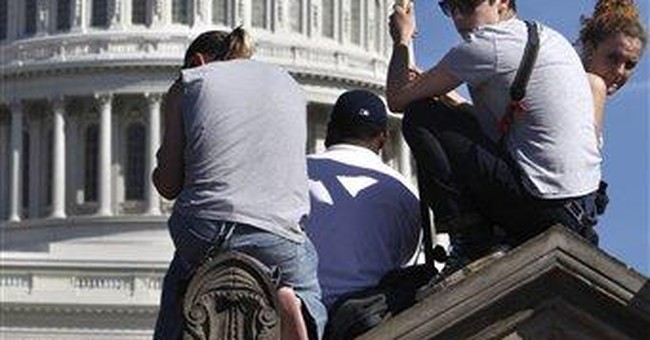 The tension between church and state has been around since Jesus held up a coin and confounded the Pharisees with His admonition to “render unto Caesar what is Caesar’s, and to God what is God’s.”

Caesar is entitled to a certain level of authority and taxation, Jesus acknowledged. But God, the Creator and Author of our souls, gets the rest. In this way, Jesus clearly limited Caesar’s reach. But government has a huge appetite for power and does not particularly like limits.

That’s why churches have been a thorn in the side of those who would impose socialism on us in the name of “equality” or “tolerance” or “fairness.” It’s why the political Left, since the mid-19th Century, has been at war with the church, alternately trying to co-opt it or destroy it.

When religious leaders support leftist goals, they are angels. When, on the other hand, they oppose abortion or the homosexual political agenda, reaction is swift and cries of “the separation of church and state” are raised. Rep. Lynn Woolsey (D-Calif.) had no problem with the Conference of Catholic Bishops aggressively lobbying for the Obama/Pelosi government health care takeover bill in the House. She was undoubtedly delighted that they would put their weight behind a law making Caesar our ultimate doctor. But because the bishops insisted on the Stupak Amendment prohibiting federal funding of abortion, she bared her teeth and called for an end to the church’s tax exemption.

Some church-related entities don’t wait for the government to bully them before ceding moral ground. At Concordia University Chicago, a campus of the Lutheran Church Missouri Synod, which is staunchly Biblical regarding homosexuality, the theater department is showing The Laramie Project, a play about the town of Laramie, Wyoming’s reaction to the murder of Matthew Shepard in 1998. Based on a book by Moises Kaufman, the play fits the narrative of “gays as victims,” which has been their most effective strategy other than the unsubstantiated claim that people are “born gay.”

The play was hatched by the Tectonic Theatre Project, whose managing director, Jeffrey LaHost, claimed that conservative Christians are a hate group and want to murder homosexuals.

Here’s a snippet from a 2002 Baltimore Sun article:

“Kaufman is openly gay, as are some other Theatre Project members, and LaHost said the actors were disturbed that initial televised accounts of the murder included commentary from right-wing groups. ‘I can't think of any other minority group where it's still hotly contested whether or not it's OK to kill them [homosexuals],’ he said. When a black person is murdered, he said, ‘no one thinks they have to get an opposing point of view from the Ku Klux Klan.’”

The Sun article didn’t mention that conservative Christians were interviewed in 1998 about Shepard only because liberal media and homosexual activists were outrageously blaming them for his murder, citing a series of “truth in love” newspaper ads offering hope for change that featured ex-gays.

The play depicts Christians at best as feckless or perhaps unwitting handmaidens of hate. To stage it on a conservative Christian campus, where parents pay dearly to spare their kids from the relentless cultural and academic propaganda found elsewhere, is a coup.

A shocking example of a religious institution cowering before its opponents and suing for peace at Caesar’s throne is the Church of Jesus Christ of Latter-Day Saints’ outright endorsement last week of a “gay rights” law in Salt Lake City. In essence, the law redefines biblical sexual morality into a form of actionable bigotry, turning ordinary people with traditional values into the legal equivalent of hateful racists. Adding “sexual orientation” and “gender identity” to non-discrimination laws is the gateway to the entire homosexual political agenda, from harassing the Boy Scouts to forcing pro-homosexual programs into the schools and workplace. It is also an indispensable step for the creation of same-sex “marriage.” For a conservative religious institution like the LDS to embrace it is not only immoral but suicidal.

The church made sure that it and its businesses would be exempted, then sent a spokesman to the City Council meeting to support passage. That’s another thing. Why do some religious leaders think it’s fine for them to get an exemption from an immoral law while it’s imposed on others? If it’s immoral and violates conscience, then it’s wrong for everyone, not just the church.

“The church supports these ordinances because they are fair and reasonable and do not do violence to the institution of marriage,” Michael Otterson, director of public affairs for the church, told the council.

But this law is not fair or reasonable, and such laws have been the foundation of challenges to marriage across the nation, beginning with Hawaii in 1991.

Flushed with “good press” from this benighted adventure, some Mormons began actually talking about helping to extend the city’s new law to the whole state of Utah. Thankfully, some far-sighted Mormons such as the staff at the Sutherland Institute are already working to overturn the city law, which Sutherland calls “vague, dangerously broad, and unjust to the parties they seek to regulate.”

The LDS embrace of “gay” rights in Salt Lake makes no sense for other reasons. The Boy Scouts are usually the first group victimized by such laws, and the LDS sponsors thousands of Scout troops across the nation. What part of the Scouts getting thrown out of schools, city buildings and United Way chapters are they missing? Did anyone mention this to Mr. Otterson?

The LDS church, to its credit, has been one of the most powerful defenders of marriage. Church members raised the lion’s share of money for California’s Prop 8 marriage amendment. Subsequently, Mormon stakes were subjected to violent demonstrations and terrorist mailings of white powder, raising the specter of an anthrax attack.

Whatever the reasoning behind the Salt Lake mistake, it has the appearance of a “don’t hit me anymore” offering, which never lasts longer than the next “gay” demand. For instance, on Oct. 28, the very day that Obama signed the federal “hate crimes” law, a centerpiece of the homosexual agenda, The Washington Post carried a column, “Help gays who aren’t hurt,” by Andrew Kessinger, complaining about how the law was passed and demanding immediate action on the rest of the agenda:

“At face value, the bill is but a reluctant acknowledgment that Americans assaulted because of their sexual orientation are indeed victims of bigotry. Adding insult to injury, the measure had to be attached to a defense spending bill just to pass. Is this the best Congress can muster when it comes to advancing gay rights?” Now, that’s a fine whine.

Kessinger goes on to demand that Congress overturn the Defense of Marriage Act, end the military’s ban on open homosexuality, and pass the Employment Non-Discrimination Act (ENDA), which will do to the nation what “gay” rights laws do to the Boy Scouts in various jurisdictions. Caesar’s big stick in the hands of sexual revolutionaries is not a pretty sight.

ObamaCare is a godless, socialist monstrosity that cannot be “fixed.” All churches would do well to band together to oppose the mendacity of would-be Caesars Obama, Pelosi and Reid.