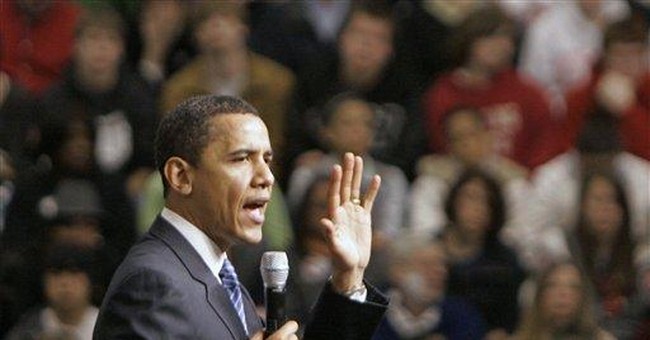 What if a presidential candidate claimed that his view on an issue drew its power from the Sermon on the Mount, which was delivered by no less an authority than Jesus Christ?

What if that view contradicted 2,000 years of church moral teaching?

Wouldn’t this be a major news story?

It would if it involved a Republican. Or even another Democrat. But when it comes to Barack Obama, the media continue to ignore newsworthy topics and refuse to give the public substantive details about the senator’s views on many key issues.

On Sunday, at Hocking College in Nelsonville, Ohio, Sen. Obama promoted homosexual legal civil unions in answer to a question posed by a pastor, and then threw out this challenge: “If people find that controversial then I would just refer them to the Sermon on the Mount, which I think is, in my mind, for my faith, more central than an obscure passage in Romans.”

Not one major network covered this, nor did the wire services, nor did the Washington Post, the Los Angeles Times, The New York Times or other major newspapers. The Post and Los Angeles Times had brief references on their blogs. CNSNews.com, by contrast, carried a comprehensive story, which was picked up by World Magazine and the Baptist Press. A couple of papers had a brief mention of Obama proclaiming that he is a Christian, not a Muslim, but that was it.

As far as the senator’s unspecified interpretation of the Sermon on the Mount and his equally shocking dismissal of a key passage in the first chapter of the Book of Romans, talk about the politics of audacity.

The senator was right about Jesus reminding us of the inherent dignity of all human beings. We are supposed to love without measure. But this should include discouraging people from engaging in behaviors with known moral, social and health risks, not using government power to tempt them into error.

Can you imagine what the media reaction would be if, say, John McCain stated that he thought adultery ought to get special legal protection and that if anyone found it controversial, he or she should look up the Sermon on the Mount?

By the way, as of this writing, Sen. McCain has said no such thing. But I haven’t yet checked tomorrow’s New York Times, which might be running a front page story to this effect next to the article about the wisdom of wearing tinfoil hats when sunspots are active. The Times, if you recall, did find space on the front page recently for unsourced allegations about Sen. McCain and a lobbyist.

Well, there’s always tomorrow. If the media want to look into the wisdom of Sen. Obama’s remarks concerning homosexual legal unions and the Biblical foundations for such, they might want to know that the Bible is quite specific in several places, starting in Genesis, about what God thinks is the appropriate place for sex, which is marriage between a man and a woman. Even the patriarchs who fooled around with more than one wife paid a price, and the men who took a fancy to other men did so as well, as indicated not only in Romans but in the less obscure passage in Genesis about the cities of the plain being destroyed with fire and brimstone after a mob of men tried to have their way with two male angels at Lot’s house.

And lest reporters buy the current “gay theology” fad of attributing Sodom’s sin to mere “inhospitality,” here’s an obscure passage from the Book of Jude: “Sodom and Gomorrah, and the cities around them in a similar manner to these, having given themselves over to sexual immorality and gone after strange flesh, are set forth as an example, suffering the vengeance of eternal fire.” (Jude 7)

Sen. Obama pulled the classic straw man dodge of attacking the one passage in Romans as if this were the only thing the Bible had to say about homosexuality. He also cited the Sermon on the Mount, of course, which the senator has discovered is a handy gay rights manual.

Think about this for a minute. This is about a lot more than the homosexual issue, as serious as that is. If Sen. Obama is right, it means that Moses, plus all Christian leaders over the last 20 centuries until very recently, have all been wrong, as are all the world’s other major religions. Now that’s news.

The media may be unwilling to cover this, however, for one of two reasons.

1) They don’t think it’s a story because, they, too, have had a special revelation from God that everybody until today has been wrong. Or,

2) They know that most Americans believe in God and that information like Obama’s officially promoting sin as a civil right might be a little too interesting to some of them.

Either way, it’s unlikely that we’ll see some space or airtime for this story instead of the latest pictures of women fainting and grown men getting goose bumps at Obama rallies.

The Times, like Katie Couric and company, ain’t a changing. At least, not over some obscure Bible passages.