To the Left, Dodgeball Has Become a 'Tool of Oppression'

Robert Holland
|
Posted: Jun 26, 2019 9:27 AM
Share   Tweet
The opinions expressed by columnists are their own and do not necessarily represent the views of Townhall.com. 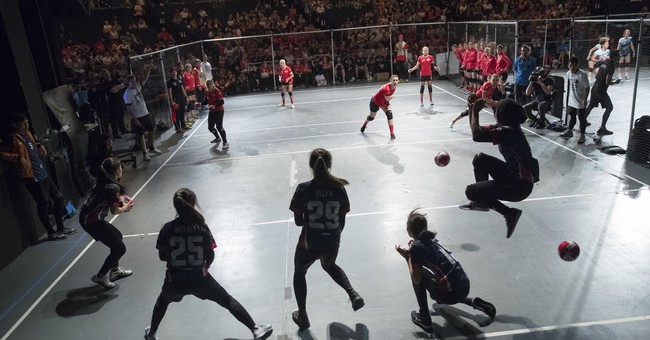 Wouldn’t you think if someone had a problem with dodgeball being too rough for some kids, they would just say so? Talk it out. Let students have a say. Maybe offer alternative activities. Or maybe save dodgeball for young adults who want to show off their athletic prowess and let the little kids try, say, kickball.

Unfortunately, as happens all too often in academe, a team of cosmic thinkers in British Columbia reached far into the ether of political correctness to slam dodgeball as a “tool of oppression.” More than that, they wailed that the playground game activates not just one but the “five faces of oppression” (conjured by an icon of feminist political theory, the late Iris Marion Young): exploitation, marginalization, powerlessness, cultural imperialism, and violence.

Does a game that entails throwing, dodging, or catching soft rubber balls deserve this much PC vitriol? Granted, if you are agility-challenged (as was I), you might have difficulty dodging a swift throw. However, if you are smarter than the average bear, you could stand your ground and learn how to catch the ball and thus put the smarty-pants flamethrower out of the game.

Does it have to be more complicated than that? Cultural imperialism seems an odd sobriquet considering that this game originated with African warriors who hurled rocks at each other, not rubber balls. Talk about belligerence; it was a war game. Perhaps cultural appropriation happened after a missionary, Dr. James Carlisle, witnessed how much this contest enhanced warriors’ fitness (the surviving ones at least) and consequently brought dodgeball back to England and St. Mary’s College, where he taught. Of course he substituted non-lethal rubber balls for rocks. Squishy Eurocentrism at work.

The attack of the Canadian eggheads deserves a penalty flag for piling-on given that a great many schools and parents have already ditched dodgeball for fear it might encourage bullying. I think a little teacher supervision could mitigate any such danger; nevertheless, the trend is clear.

Perhaps the PC verbal assault is not just against imperialistic dodgeball, also known as “bullyball.” Could all games that end with winners and losers be at risk of extinction? Particularly when the majority of winners may be muscular guys? Even in kickball (in which you kick the ball and run the bases), the appearance of a gifted athlete capable of blasting the ball far into the outfield could intimidate smaller, less athletic kids—thus rendering them marginalized, powerless, and scarred for life.

Ah, but in a mirthful yet instructive piece for Slate, Nick Greene revealed the sure-fire cure for kickball clout: the kickball bunt, which he calls “the most cold-blooded move of all sports.” Just tap the ball a few yards in front of home plate and witness the chaos that ensues. Infielders will stumble over themselves to reach the faintly hit ball and almost always throw wildly to first base. So the meek non-athletic kid ends up on second base while jocks make fools of themselves. Tables turned.

As opposed to nitpicking playground games (there are hundreds of them) for insufficient conformity to PC agendas, wouldn’t a better use of time be to applaud and advocate for more time for kids to run and play, either in structured physical education or more freestyle recess? A fine online piece in Luminate reports on several recent studies showing that kids who get regular exercise not only gain cardiorespiratory and muscular benefits but also make better grades. Yet, sadly, schools have cut back on physical education (recess has nearly vanished) as government mandates keep children in front of their computers or immersed in standardized tests.

Rather than simply making physical education class compulsory (and therefore almost universally hated), I believe a better approach would be to build opportunities to move around briskly into the school day. The Hechinger Report tells of Kaleidoscope Academy, an Appleton, Wisconsin, charter school, where some teachers allow “brain breaks” every 20 minutes, while others offer kids the chance to sit on wobbly chairs during science and math lessons. Lunch includes outdoor recess, and students can choose between exercise-oriented classes: dance or personal fitness.

If some kids also decided on their own volition to play a brisk round of dodgeball or kickball, would that really mark the end of civilization?